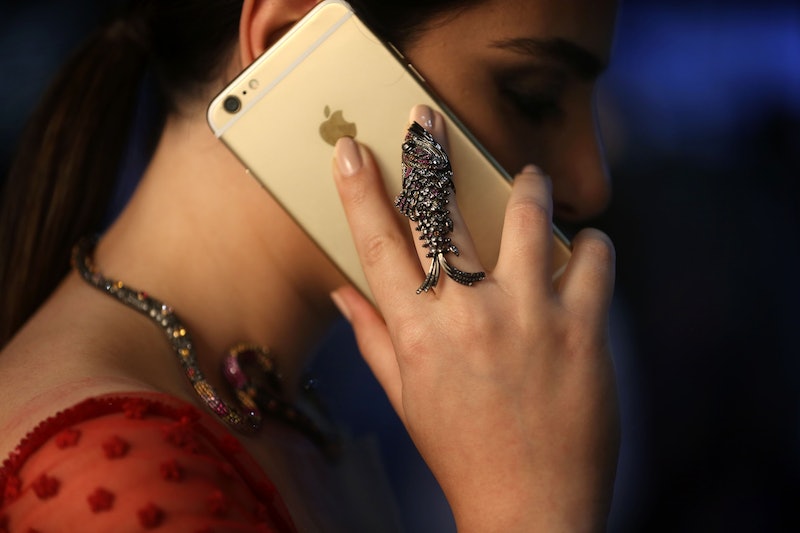 The new iPhone update is officially out, and say what you will about the new aesthetic features, there's one feature that could potentially save lives. With the iOS 11, you can place an emergency SOS call from a locked iPhone, and really, this trick is something every woman should know about the new update.

In previous iPhone operating systems, you could call emergency services from a locked screen or by giving Siri the command "charge my phone 100 percent." While those were effective ways to get yourself out of trouble in most cases, the former wouldn't always work if the phone's screen was broken, and the latter wasn't very discreet.

Now, Apple has fixed both of those problems with this new update. Hopefully you'll never need to use this feature, but if you should ever be in a tight spot when even speaking to your phone or bringing it out to look at would be dangerous, now you can just quickly press the sleep/wake button five times, and then it will automatically get you in touch with emergency services. If you've set an emergency contact in the phone, it will also alert that person that you're in trouble and give them your location. And just as an emergency feature should be, it's incredibly easy to enable.

If you do want it to make a phone call automatically after you've pressed the sleep/wake button five times, you have to enable "Auto Call" in your settings. The automatic setting also comes with a protection against just accidentally calling 911 — pressing the button five times starts a three-second countdown, which comes with a countdown noise so you have a chance to cancel the call if you've triggered it accidentally. You can turn that countdown sound off in the settings, though. You might want that if you were in a circumstance where an iPhone sound could alert a potential criminal to your location — which, again, is hopefully a situation that you will never find yourself in.

There are a couple of limitations to the feature; for example, it only works in certain countries. If you're not in the U..S, Australia, Belgium, Brazil, Canada, China, France, Hong Kong, India, Italy, Japan, Russia, Spain or the UK, then you'll have to wait for a future update to take advantage of it. All things considered — including the large percentage of the world's population in those countries — it's not bad for a start.

While this update will make every iPhone user who has access to it just a little bit safer, it's especially key for women, who are in many ways much more in danger of being targeted in their everyday lives than men. This could be an effective way to help women who find themselves facing intimate partner violence, a situation in which it's easy to imagine that even the simple act of making a phone call could put the woman in far greater danger than if she were able to make the call more discreetly.

From a woman's perspective, this is a big improvement over the days when Apple found itself in hot water for not including a menstrual cycle tracker in its health app update back in 2014. They did manage to fix that little bug back in 2015, this is another signal that Apple is really making a commitment to keeping women safe and healthy. Really the only thing you have to worry about here is activating the call without knowing it — but are you really in the habit of pressing the sleep/wake button five times without paying attention to it? This is a case where it's definitely better safe than sorry.

More like this
20 Smart Devices Under $35 That’ll Change The Entire Vibe Of Your Home
By Emma Carey
Here's How To Get Your iPhone To Update Automatically Forever
By Emma Carey
Why Everyone Is "Soft Tagging" Friends On Instagram Right Now
By Alexis Morillo
The 5 Best Bluetooth Label Makers For Your Home, Office & Beyond
By Rachel Dunkel
Get Even More From Bustle — Sign Up For The Newsletter