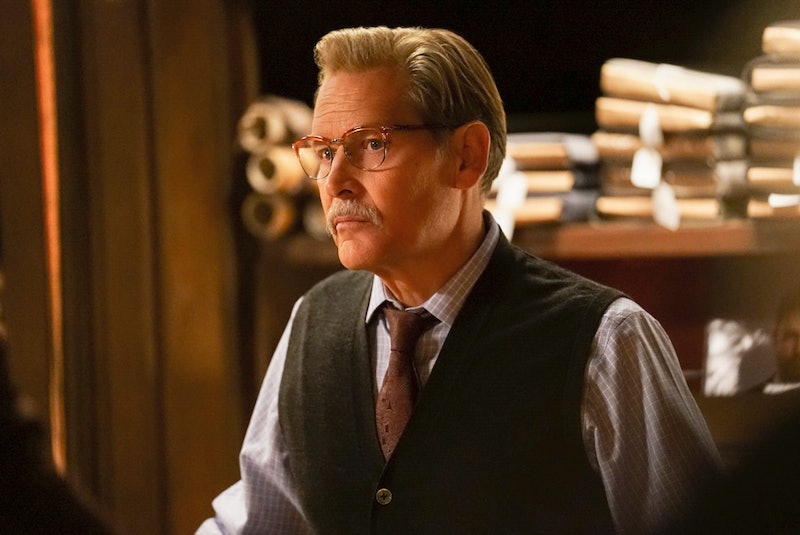 Nearly four episodes in and the most interesting thing on CW's Black Lightning (executive producer: Mara Brock Akil) isn’t the reemergence of the titular superhero or ruthless villains like Tobias and Lady Eve. Instead it’s Black Lightning’s right hand man Peter Gambi (James Remar) and his mysterious movements that have peaked the curiosity of fans. But who is Peter Gambi on Black Lightning and what are his motives?

Peter Gambi is something of a father figure to Jefferson Pierce, in addition to a mentor and tailor, and encourages Jefferson to once again become Black Lightning, much to the dismay of his ex-wife Lynn. Up until “Lawanda: The Book of Burial,” Gambi seemed to be no more than a dedicated ally to Black Lightning. Sort of like Black Lightning's own "Alfred" as Twitter quickly pointed out, drawing a parallel between Gambi and Batman's loyal butler. Unfortunately, this ally role may no longer apply.

In the third episode of Season 1, Freeland residents held a memorial march in honor of a citizen Lawanda, murdered by the 100 gang simply for wanting to protect her daughter. But despite Black Lightning's best efforts to protect the marchers, things went haywire. Acting on command of Lady Eve, Tobias Whale — kingpin of the 100 gang — put an end to the march by opening fire, which resulted in the shootings of both the reverend and Jennifer's boyfriend Khalil.

While it was painful to watch Jennifer, who has experienced nothing but trauma since the show began, viewers quickly had to put their anger towards Tobias on hold. Unaware of a security camera above, Tobias was caught on video committing the crime by Gambi, who, without any real hesitation, deleted the footage.

Talk about a "huh" moment. Why would Gambi delete the footage? Is he secretly working for Tobias? Hopefully, that's not the case — though the comic books do confirm that the two have shared history.

According to Tobias' character description — reported by Entertainment Weekly:

"In the days before Black Lightning, Tobias was a politician, rising up the ranks of local government through corrupt and illegal means. That was until he was brought down by Alvin Pierce, Jefferson’s father. Enraged, Tobias murdered Alvin and was driven underground into exile."

Before Peter Gambi was a tailor, he was a hitman for the mob. He then went on to become a friend and confidant to Jefferson, and also designed the costume and force field belt which allowed Jefferson to become Black Lightning. In later issues, Jefferson learned the truth about his father's death after Gambi threw himself in front a bullet initially intended for him. This heroic sacrifice on Gambi's part inspired Jefferson to forgive him for murdering his father.

Since the TV show didn't exactly begin with the origin of Black Lightning, there's no definite answer about what part of the story is currently playing out. But given Gambi's mysterious moves lately, something tells me we're right at the part where Jefferson still believes Tobias killed his father.

Jefferson was already skeptical about coming out of retirement, afraid that his family would get caught in the crossfire during his crusade for justice. And if Jefferson knew that Tobias was still alive and lurking around Freeland, he'd probably immediately go back into hiding given what Tobias allegedly did to his father. And Jefferson not being Black Lightning is not an option for Gambi.

So maybe Gambi deleted the footage, because he needs Black Lightning to not quit again and instead to stay focused on taking down the 100 gang — and eventually Tobias — ensuring that his own secret never gets revealed. Or I could just be grasping at straws and Gambi is really on Tobias' payroll too with plans to destroy Jefferson and the rest of the Pierce family.

Either way, Gambi clearly has an agenda of his own on Black Lightning. And when Jefferson catches wind of what it is, things won't be pretty around that tailor shop.