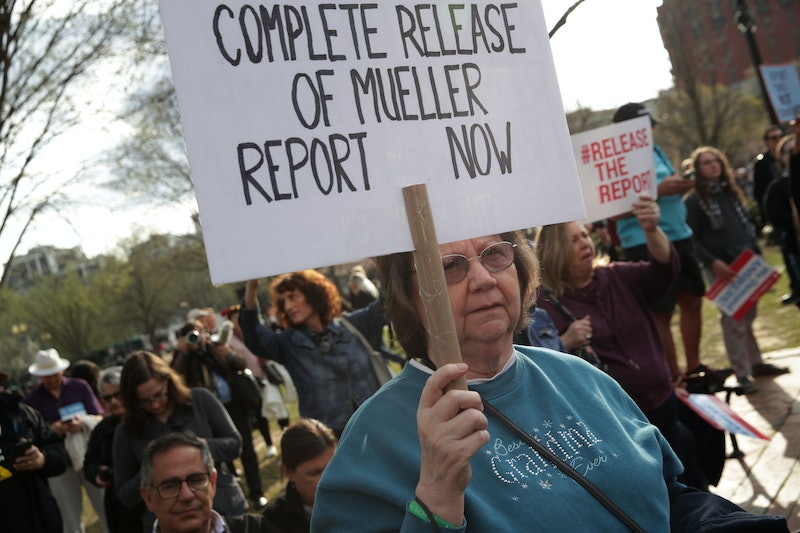 The special counsel's report on Russian interference in the 2016 election — and whether the president and his campaign aides coordinated with that effort at all — is expected to be released Thursday. It won't be made entirely public, however: Reuters reports that Attorney General Bill Barr will black out portions of the document. Former federal prosecutors tell Bustle what's redacted in the Mueller report may be withheld for a number of legitimate reasons, with one exception.

Barr told Congress that there are four cases for redaction in the Mueller report: where there's classified information, grand jury material, information that could compromise an ongoing investigation, or "information that would unduly infringe on the personal privacy and reputational interests of peripheral third parties," according to Reuters.

That last category pertaining to "third parties" will likely be "hotly contested," former federal prosecutor Renato Mariotti tells Bustle, because Barr is not legally required to withhold that information.

"Since [Barr’s] decision is not based on a legal requirement here, I expect that members of Congress and others may dispute whether any discretionary redactions were properly made," Wood says.

It's unclear whether any details related to "third parties" will be important to the investigation's larger narrative about election interference. The New Yorker's Jeffrey Toobin explains that that category "is an invention on Barr’s part; there is no law or regulation prohibiting disclosures of this kind." Toobin points out that the president could be considered a "peripheral third-party," given the vague language Barr used in describing this fourth category of redacted information. (It's important to note that President Trump has faced no charges resulting from the special counsel's investigation.)

In turn, grand jury material is closely protected because federal law requires that it is kept secret, as Vox reports. One main reason for this is that grand juries — the makeup of which is already kept under wraps — are tasked with deciding whether or not to charge someone with a federal crime. If a person isn't ultimately charged, Vox explains, it doesn't necessarily make sense to drag that person's name through the press by associating them with a grand jury investigation.

Barbara McQuade, a former federal prosecutor, tells Bustle that she views the four categories of redaction Barr laid out as practical, legal reasons to redact information in a report that the public will be able to access. She says that doesn't mean lawmakers also shouldn't have restricted access to Mueller's findings, though. She points to the Senate and House Intelligence committees, whose members she says should be permitted to see classified information that isn't released to the public.

"If Congress subpoenas the whole report, we could see a court battle over the scope of all of these bases for withholding disclosure," McQuade says.

According to the Los Angeles Times, Barr will provide some clues as to why certain information in the Mueller report is withheld. The redactions will be color-coded based on the four categories under which he said he would redact information, according to the newspaper.

The Mueller report, which Barr told Congress would be about 400 pages long, is expected to offer a detailed look into Mueller's investigation, regardless of the redactions. "You will get more than the gist," Barr told Congress when he was asked whether large portions of the report will be blacked out, according to NPR.

In March, Barr summarized the Mueller report in a letter to Congress. According to Barr, the Mueller investigation did not find evidence of collusion between Russia and Trump's 2016 campaign. He also noted investigators "did not draw a conclusion" on obstruction of justice, and wrote that he and Deputy Attorney General Rod Rosenstein “concluded that the evidence developed during the special counsel’s investigation is not sufficient to establish that the president committed an obstruction-of-justice offense,” according to The New York Times.

That summary left a lot of questions unanswered. Many Democrats characterized it as vague and inadequate because it did not share specific information regarding how Mueller — and Barr — came to their respective conclusions. After Barr's summary was released, The New York Times reported that some of Mueller's investigators, who were unnamed, voiced concern that Barr’s “narrative” of the findings will have solidified the public’s view of the probe before a fuller version of the report could be released. Some investigators also "viewed their findings as potentially more damaging for the president than Mr. Barr explained," per the Times.

In some ways, Barr's decision to redact portions of the report fall in line with policies that are already in place. However, Democrats in Congress made clear that they want the full version of the report, with no redactions — and that if need be, they are willing to fight for it.