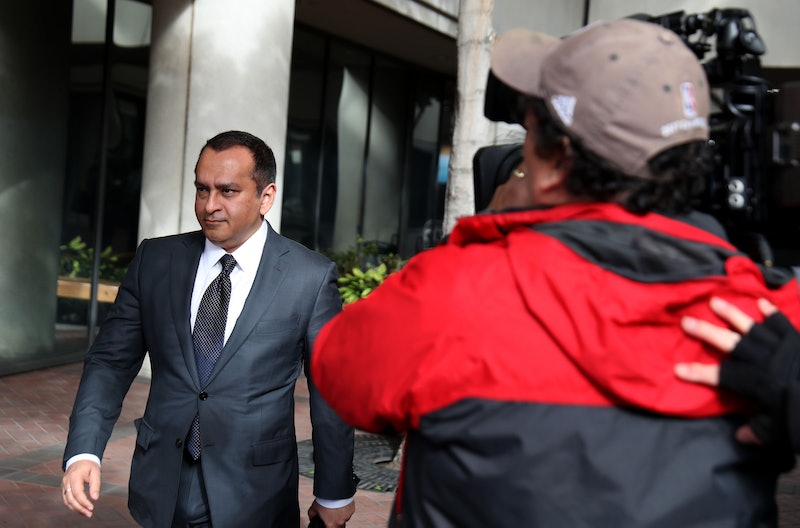 Premiering Mar. 18, the HBO documentary The Inventor: Out For Blood in Silicon Valley details how Stanford dropout Elizabeth Holmes beat Kylie Jenner to the "self-made female billionaire" designation by four years, achieving the goal at the age of 30. By the time she was 31, though, Holmes was being called a fraud, having convinced several high-profile people to invest in her company Theranos, which purported to deliver data on diseases and other health and bodily related issues from the simple prick of a finger. But the company was never able to deliver on its promise, and Holmes, along with Theranos COO Ramesh "Sunny" Balwani, were indicted in June 2018 for wire fraud and conspiracy. They have both pleaded not guilty. Where is Balwani now?

Balwani, who was born in Mumbai, India, met Holmes when he was 37 and married, and she was just 18, still a senior in high school, during a trip to Beijing as part of Stanford's Summer Mandarin course, according to Business Insider. With a background in information systems, Balwani profited off of the pre-dot com boom, the site reports, launching and eventually selling two software development companies before graduating with Masters in Business Administration at University of California, Berkley and eventually pursing an additional undergraduate degree in chemical engineering from Stanford, dropping out in 2009 to join Theranos full-time despite having no background in biological science, lab testing, pathology, or medical devices. He oversaw day-to-day operations. Per 60 Minutes, he reportedly fired employees for questioning the product and berated scientists for failed tests. A former employee named Michael Craig described him as both "terse" and "a bit of a hothead" in an interview with ABC News.

"He would just get so angry and so upset, and also was not very well versed in the medical diagnostic world and wasn’t really well versed in the sciences, so would frequently say things that were just inappropriate," ex-Theranos employee Erika Cheung claimed to ABC News. "And it became very clear to entire departments that he didn’t understand really what was going on."

Though Balwani and Holmes lived together just four miles from the Theranos office, most of their employees and board members were unaware that they also had a romantic relationship, as Holmes confirmed during her during her 2017 deposition, per ABC News.

"Once we started working together, it was a very intense working relationship," Holmes said. "And the sort of romantic piece that was there at the very beginning died. I don't think it happened in one moment, but it was very clear that we were colleagues."

Balwani, who left Theranos after seven years in 2016, claims he is not guilty for massive fraud charges first brought against him in March 2018 because he was never paid for his work with the company. His attorney told Vanity Fair, "Mr. Balwani committed no crimes. He did not defraud Theranos investors, who were among the most sophisticated in the world. He did not defraud consumers, but instead worked tirelessly to empower them with access to their own health information. Mr. Balwani is innocent, and looks forward to clearing his name at trial.”

In a Reddit AMA, Wall Street Journal writer John Carreyrou, who reported on Theranos for the paper and also penned the book Bad Blood: Secrets and Lies in a Silicon Valley Startup, said that he believes Holmes will try to place the blame largely on Balwani, who says that he departed Theranos on his own accord but was reportedly fired.

"[T]his was a fraud perpetrated by two partners in crime," he claimed during the Q&A. "But as I wrote in the epilogue of Bad Blood, Elizabeth always had the last say. When it started becoming apparent to her that she would have no chance of persuading people she was really trying to change the company's culture and fix its problems, she threw Sunny under the bus. She fired him and broke up with him. His departure was dressed up in a press release as voluntary retirement, but it wasn't."

So where is Sunny Balwani now? Both Balwani and Holmes were indicted on nine counts of wire fraud and two counts of conspiracy to commit wire fraud for knowingly distributing blood tests with falsified results and are currently awaiting trial where they could each receive a sentence of up to 20 years in prison and a $250,000 penalty, with restitution, per count, as reported by ABC News. Balwani hasn't spoken publicly about Holmes — instead, his lawyer, Jeff Coopersmith, attempted to clear his name by offering that he deserves "an A+ for dedication and effort."

"Sunny Balwani is an extraordinary person," Coopersmith told ABC News. "He was born in Pakistan to a Hindu family, and eventually the family had to move to India because being a Hindu in a mostly all-Muslim country of Pakistan was very difficult. When he got to the United States, he literally kissed the ground. ... Everything he ever did in his life he got through earning it through incredibly hard work. He was the most hardworking person pretty much I've ever met."

"Obviously when we look at this after the after the fact it has been a business failure," Coopersmith continued. "And you know Mr. Balwani is very sorry about that... but that is not fraud."

Coopersmith also told Business Insider that Balwani looks forward to trial and said "it will be an honor to defend him vigorously."

Holmes and Balwani are free on $500,000 bond but were ordered to give up their passports per CNBC. According to Vanity Fair, Holmes still lives in a luxury apartment in San Francisco, and has been seen walking her dog around her neighborhood as well as at Burning Man with her fiancee, a younger hotel heir working in tech named Billy Evans, according to The Daily Mail.

Balwani has mostly laid low since leaving Theranos, and his massive Atherton estate was sold in March 2018. After a 2016 inspection of the Theranos lab, The US Centers for Medicare and Medicaid Services banned him from owning or operating a blood laboratory, including any and all Theranos facilities, according to the Wall Street Journal.

Holmes settled her SEC fraud charges with a $500,000 fine, an agreement to not serve as a public company officer or director for 10 years, and a repayment of millions of shares, as reported by Reuters. Balwani did not agree to settle and will continue to fight those charges, as well as the others he and Holmes will face when their criminal trial commences later this year or early 2020.