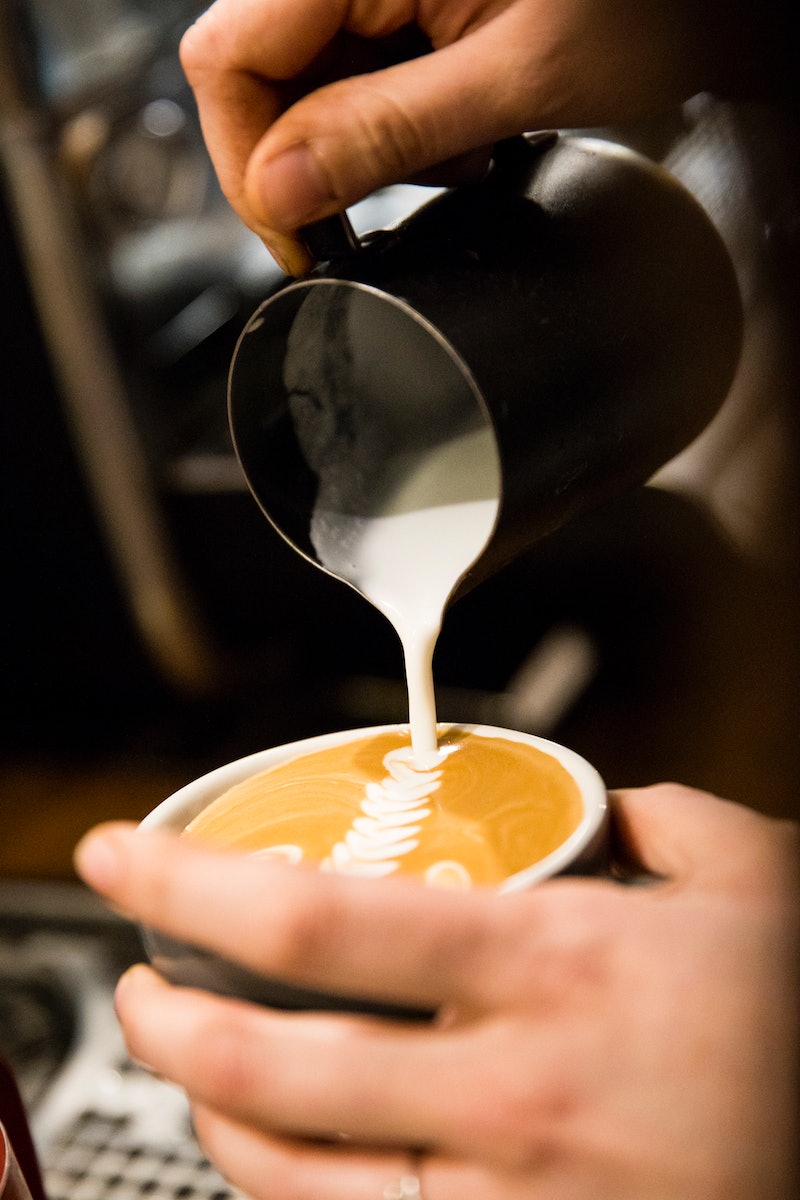 At some point in our history, someone looked at a calf nursing from its mother and was like, "Heck yeah, let's put that in coffee." But in the last few years, the popularity of non-dairy milks has grown 61 percent, reaching an estimated $2.11 billion in sales, according to research from market intelligence agency Mintel, which means a whole lot of people are looking at things like soybeans and almonds and going, "Heck yeah, let's put that in coffee." With more and more people drinking milk alternatives, it's no surprise people are wondering which non-dairy milk is the most nutritious.

Luckily, McGill University is here to answer that question. A new study from the university looked at four of the most commonly consumed non-dairy milks — almond milk, soy milk, rice milk, and coconut milk — to see if their health benefits stack up. "Though they are popularly advertised as healthy and wholesome, little research has been done in understanding the nutritional implications of consuming these milk beverages in short term and long term," the team wrote in the study's report.

The nutritional value of each non-dairy milk was weighed against the nutritional value of regular ol' cow's milk, and according to researchers, soy milk is "a clear winner," said a press release from McGill. Don't worry, though — you can still "Heck yeah" any of the four milks. According to the McGill University researchers, it turns out all four non-dairy milks do have their own benefits aside from giving folks who are lactose-intolerant or who simply don't like dairy milk another option.

The study concluded that soy milk, which "has been a substitute for cow's milk for 4 decades," according to the press release, has the most balanced nutritional profile, and also has "health benefits linked to the anti-carcinogenic properties of phytonutrients present [...] known as isoflavones."

According to Oregon State University, observational studies of soy isoflavones "suggest that higher intakes of soy foods early in life may decrease the risk of breast cancer in adulthood," but "[t]here is currently little clinical evidence that taking soy isoflavone supplements decreases the risk of incident and recurrent breast cancer."

McGill university researchers did mention in the study's press release that they have concerns about soy milk's "beany flavor," which, fair. They also expressed concerns about "the presence of anti-nutrients (substances that reduce nutrient intake and digestion)" in soy milk, but still concluded that of the four milks, it comes the closest to meeting dairy milk's nutritional profile.

Rice milk turned out to be almost the exact opposite of soy milk, according to the researchers. No "beany flavor" was present; instead rice milk was reviewed as being "sweet" but having "relatively little nutrition." The McGill University team suggested rice milk as a good alternative for consumers who can't ingest soy milk or almond milk because of allergies, and that it's high in carbohydrates. That aside, though, "consumption of rice milk without proper care can result in malnutrition, especially in infants."

Coconut milk received a "no protein and few calories" tag from the researchers, who added that the calories are mostly from fat. Coconuts also "help reduce levels of harmful low-density lipoproteins (bad cholesterol) that are associated with cardiovascular diseases," the researchers added, but the benefits of coconut milk go down if it's stored for more than two months.

Almond milk received a not-quite-positive review, with McGill researchers stating there's a "need for complementary sources of food to provide essential nutrients." However, researchers asserted that almonds also have fatty acids that are helpful when it comes to reducing the same "bad cholesterol" coconut milk helps lessen.

In contrast to all four non-dairy milks, cow's milk was called "a wholesome, complete food," by the researchers, who said it can provide us with all the major nutrients we require, like "fat, carbohydrates, and proteins." Cow's milk also provides "a wide range of host-defence [sic] proteins because various beneficial anti-microbial effects are found in both human and bovine milks," and research has shown that "in the case of infants, consumption of cow's milk has considerably reduced risk of fever and respiratory infections."

Researchers did point out that lactose intolerance is widespread, affecting between 15 and 75 percent of all adults "depending on race, food habits, and gut health," and said that future research on "alternative milk" is required to fully understand the effects soy, rice, coconut, and almond milk have on us.

In the case of all non-dairy milks, though, if you're committed to staying away from cow's milk, the smart thing to do seems to be to raise a glass of your favorite non-dairy milk, but also watch your intake and make sure you're compensating for what soybeans or rice or almonds can't give you on their own. Cheers, y'all.