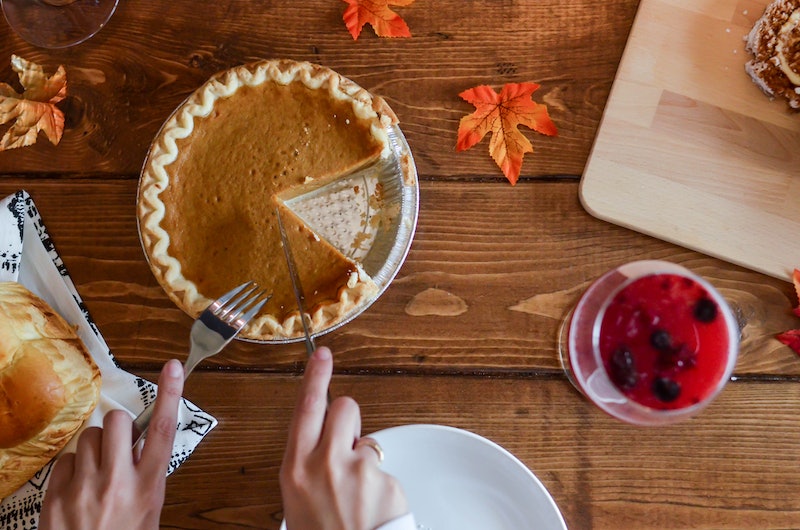 As long as I can remember, my parents have hosted our family's Thanksgiving dinner. Every year, both my mom and dad's sides of the family crowd into our suburban home to watch the Macy's Thanksgiving Day Parade, catch up on one another's lives, and sit down mid-afternoon for a turkey and carb-filled feast. Typically, my dad carves his perfect Thanksgiving turkey around 3 p.m., and everyone sits down to eat shortly after. This never struck me as an odd tradition until I brought home an friend from college for the holiday. Of course, he was far too polite to say anything at the time, but he recently told me that he did think it was a bit out of the ordinary to eat dinner mid-day; his family follows a far more logical plan of eating at their normal dinner time. After looking into it a bit more, I found that families across the country heavily differ with their opinions on when the best time to eat Thanksgiving dinner is.

On a typical day, Americans eat dinner in the evening, but for some mysterious reason, Thanksgiving is the exception to that rule for many families. At a time when you're usually falling into your post-lunch grogginess at work, on Turkey Day, you trade your late-afternoon slump in for a full-on food coma. Some, like in this article on Slate, have argued that eating your Thanksgiving feast at 3 p.m. is just plain wrong.

I guess I see where they're coming from when they argue Thanksgiving dinner should be at dinner time. After all, it is just a dinner party, so why should we treat it any differently? But there are a lot of factors a host should consider in the process of deciding what is the best time to eat Thanksgiving dinner: everything from travel logistics to football to — perhaps most importantly — leftovers.

But is eating Thanksgiving dinner mid-afternoon really the best practice? To answer that, we first have to look at the reasons why this tradition began in the first place. While many people now likely stick with their early mealtime for the sake of keeping up their family's tradition, there once were practical reasons behind why people ate midday. The trend started all the way back in Roman times when people only ate one huge meal a day in the early afternoon. They called this "dinner," though, and lunch as we know it didn't exist until the Industrial Revolution, according to BBC.

So honestly, eating Thanksgiving dinner in the middle of the day checks out as far as history goes. Thanks to the invention of the lightbulb, most people now eat dinner in the evening though, so there's gotta be more behind our strange turkey-eating tradition.

I did a little informal polling (aka, texted my mom and a few friends, so I would hardly call it a representative sample, but it works) and asked if their families eat Thanksgiving dinner earlier than on most other days, and if so, why. A handful of my respondents were aghast at the possibility of eating such a large meal at what seemed to them like an unnecessarily early time. "It is literally called Thanksgiving dinner," one friend said. "Not Thanksgiving afternoon tea."

Most of my friends did actually eat at this bizarrely early hour, though for varying reasons and with differing rates of satisfaction with the tradition. They did have some pretty convincing reasoning behind the premature dinner: A few pointed out that family members who have to travel longer distances need time to drive home safely after dinner. Sounds like some sound logic to me. Eating earlier dinners also means that out-of-town family is able to attend even if they don't have the next day off of work and gives everyone some time to let their turkey-induced tiredness wear off before hitting the roads.

Having a full afternoon left after dinner also allows for what I would argue is the best part of the holiday: second dinner. There are few things better than same-day Thanksgiving leftovers. If you host your first meal early enough, it gives people time to digest and go back for round two. This also leaves you with less leftovers, which may be a good or bad thing depending on who you are as a person. I have yet to host my own Thanksgiving, but when I do, I plan on ushering everyone out of my home as soon as they are done eating as to prevent second helpings and maximize my amount of leftover stuffing retention. The perfect Thanksgiving is a science, people.

Another popular response to my poll was a resounding, "Football, duh!!" I know almost nothing about sports, and if you are a college football or NFL aficionado you probably already know this, so go ahead and tune out this advice. But to my fellow sports-averse Thanksgivingers: apparently there are some NFL and bowl games on Thanksgiving every year, but the times can vary, so make sure you look up game times when planning out your meal! Guests may not be thrilled if they have to be ripped away from watching their beloved teams, even if it is to enjoy some dang delicious food.

There are also those adorably wholesome families that hold their own games of touch (or tackle, who am I to judge?) football on Thanksgiving. If that is what your holiday typically looks like, be sure to take that into consideration when planning your mealtime too. With the sun setting at practically 4 p.m. these days, there are precious few daylight hours to use, and unless you have stadium lights in your backyard, playing in the dark might not be the move.

When it really comes down to it, it doesn't matter what time you decide to eat your Thanksgiving feast. As long as you choose a time that allows everyone to travel safely, won't make anyone mad at you for missing a football game, and allows the maximum amount of time with loved ones (that includes stuffing and mashed potatoes), I'm sure you've made the right choice.