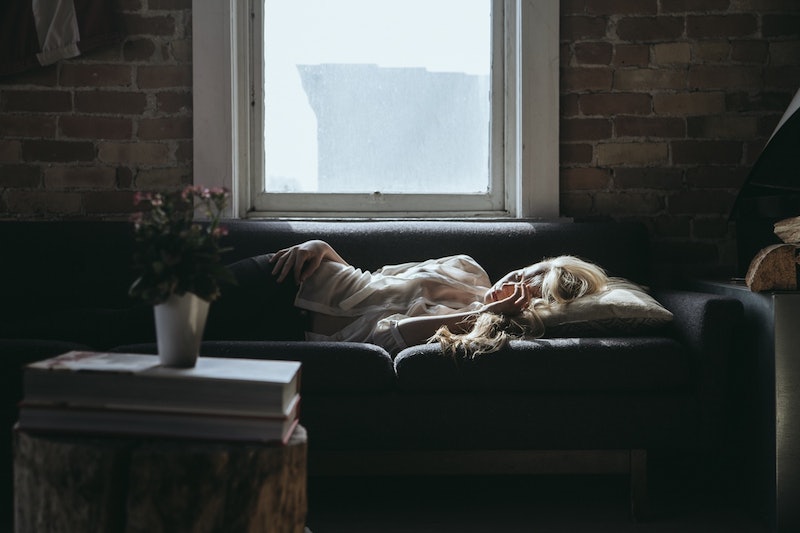 If you're one of more than 37 million people in the United States who suffer from migraines, you know it's more than just a headache. If you're not sure what the difference is between a headache and a migraine is, here's how to tell the two apart. While a headache can be uncomfortable and inconvenient, it usually doesn't keep you from performing everyday tasks, and it can be treated with over-the-counter medication. A migraine is a neurological disorder that causes painful pulsations and can result in debilitating pain that affects your ability to live your life.

The first time I remember having a migraine I was 6 years old. It was Easter, and I had been complaining to my mom all day that my head hurt. The next part I don't actually remember, but my mom has repeated the story to me several times. Disoriented from the pain, I went and stood up against the wall, and then slid down it like a rag doll, finally passing out in a heap on the floor.

My parents rushed me to the hospital where I laid in bed in unbelievable pain for several days. If you're wondering what migraine pain feels like imagine that someone has put a vice grip around around your head and they keep turning the screws tighter and tighter.

The pain and nausea that come from a migraine can make you feel like you want to throw up, light feels like razors slicing your eyes, and even the slightest noise feels like someone is repeatedly punching you in the back of the head. Now imagine this goes on for hours, days, or even weeks.

After several days of lying in bed suffering from the aforementioned symptoms, the doctors told my mom that I might have meningitis (an inflammation of the spinal chord), and that they wanted to perform a spinal tap, or lumbar puncture, to test my spinal fluid. They didn't even consider migraines because I was only 6.

Hours before the procedure the pain mysteriously disappeared, and the next day I left the hospital like it was all a bad dream. Unfortunately this scenario has played out hundreds of times since then, and as a kid I regularly slept on ice packs instead of pillows. It wasn't until I was in my 20s that I began to learn what my migraine triggers were, and how to manage the pain so I didn't have to stop my life every time I felt a migraine coming on.

The Quick & Dirty On Migraines

According to Migraine.com, women are affected by migraines three times more than men; 91 percent of sufferers miss work or can’t function normally during migraine attacks; 63 percent have one or more migraine attacks monthly; 51 percent said migraines cut in half their work or school productivity; almost half of all migraine sufferers have not been diagnosed; and 24 percent have gone to the emergency room because the migraine pain was so severe.

The most common symptoms of migraines include: Throbbing, pulsating pain; sensitivity to light and sound; nausea; pain on one side of the head; blurred vision; an aura (vision changes or unusual sensations in the body shortly before the onset of a migraine); and vomiting.

Once you know you have migraines, the next step is learning what triggers them so you can try to avoid the things that bring them on. I grew up with parents who wore a lot of perfume, and it wasn't until I was an adult that I realized that perfume, air fresheners, or any kind of artificial smell is a migraine trigger for me.

Now that I know this I ask the people closest to me to refrain from wearing perfume or using artificial scents when I am around. Because I can't control the rest of the world I carry a menthol or lavender stick with me that I can inhale it if I am forced to be around someone who is wearing perfume. Things like taxis and ride-share services are particularly hard because most drivers use air fresheners in their cars.

Another trigger for me is stress. In 2016 I had a migraine for more than two months straight. I made multiple trips to urgent care. I got massages. Nothing helped, and the pain was so bad that I prayed I would die. I'm not kidding. Convinced I had a brain tumor, I got an MRI. When the results came back clear I had to face the fact that stress was causing my problems, and I had to make changes to my lifestyle.

Exposure to fluorescent lighting is almost guaranteed to result in a migraine for me, and I even almost left a new job because of it. Luckily I was able to talk to my supervisor and build myself a shaded cubicle to block out the lights.

Additionally, certain weather patterns can make my head feel like it's going to explode. When I lived on the East Coast I had five times as many migraines as I have now that I live on the West Coast. Changes in barometric pressure, sudden changes in temperature, and humidity can bring on migraines. Migraine Again even complied a list of the best and worst places to live for migraine sufferers.

If you're not sure what your triggers are, you can keep a migraine journal detailing what you were doing, eating, etc. before each attack to help you identify what triggers your migraines, because everyone is different.

Talk To Your Doctor

I am not a medical professional, just someone who has suffered from migraines most of my life. If you think you have migraines, talk to your doctor about treatment options. You might even want to see a neurologist who specializes in migraines. While the specific cause of migraines is still unknown, there are effective treatments, including preventative medication, rescue medication, and even Botox for chronic migraine treatment. If an over-the-counter medication works to treat your headaches you probably don't have migraines.

Migraines can significantly impact your ability to live your life, and because it's an invisible disease, many people truly don't understand the kind of pain you are in. Trust me, I get it.

If you're suffering in silence, Migraine Again has advice for talking to your family and friends about migraines, because the struggle is real, and no one should have to go through this alone.