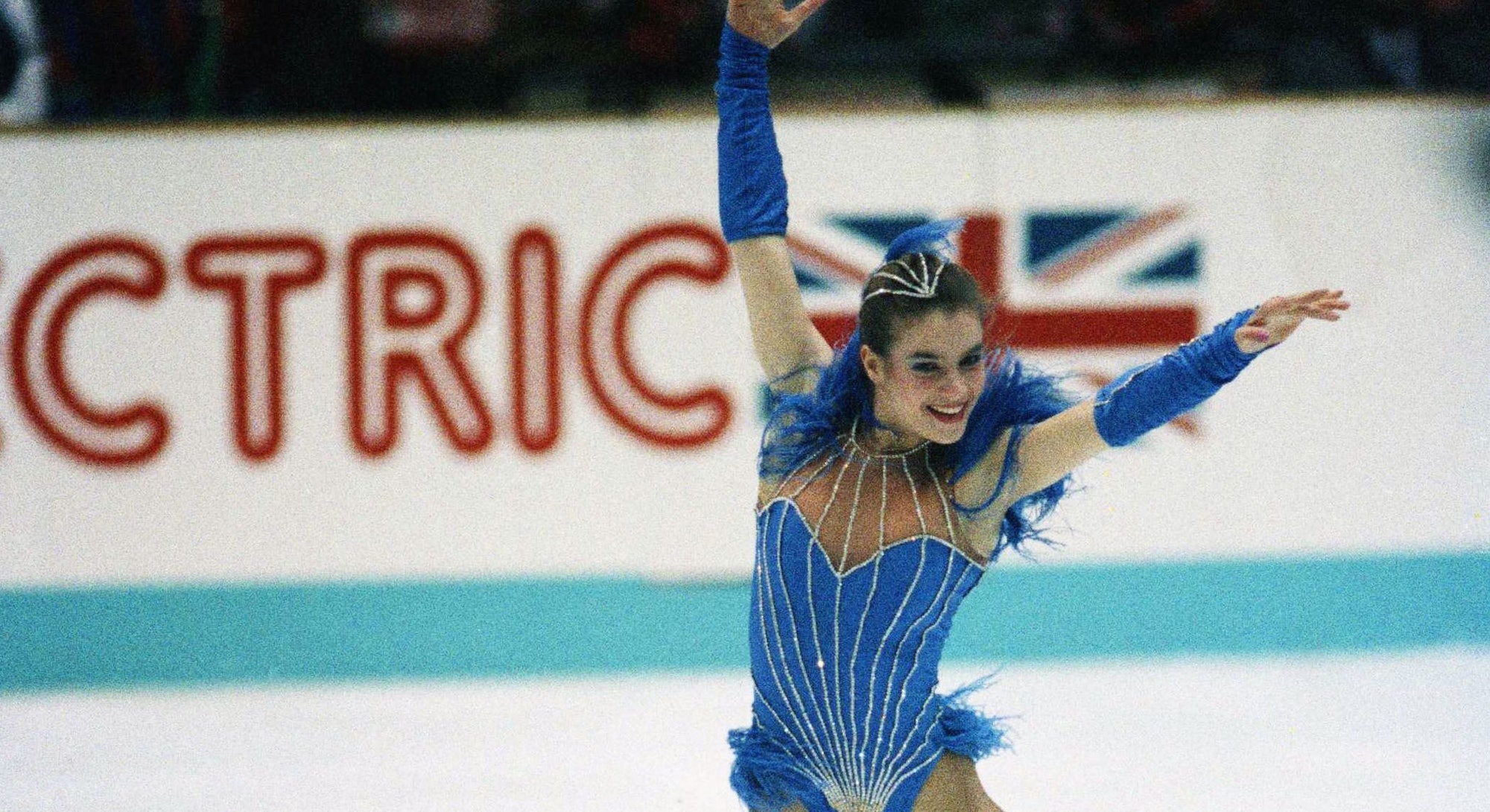 There was one scandalous moment at the 1988 Winter Olympics that changed the rules of competitive figure skating costumery — for a decade-and-a-half, anyways. Katarina Witt, a competitor from East Germany, performed in a blue costume, adorned at the waist with feathers instead of a skirt, the likes of which barely covered her posterior as she moved across the ice.

The presence of glaring Olympian butt cheek scandalized the International Skating Union, the governing body for competitive figure skating — including the Olympics. As a result, the ISU instituted "The Katarina Rule." The regulation dictated that it was mandatory for women to wear a skirt that covered their hips and butt, and also required that women covered their midriffs. And Witt wasn't the only who'd offended the delicate sensibilities of the judges, either. A skater named Debi Thomas hit the ice the same year in a black, beaded, full-body unitard and no skirt — a move that put a temporary ban on costumes without skirts.

Both of these hardcore costume bans were lifted in 2003, and since then, the ISU has kept the Olympic figure skating dress code rules relatively subjective — at least for women. The following is Rule 501 in the [ISU Special Regulations & Technical Rules handbook, last updated in 2016:

At ISU Championships, the Olympic Winter Games and International Competitions, the clothing of the Competitors must be modest, dignified and appropriate for athletic competition — not garish or theatrical in design.

Clothing may, however, reflect the character of the music chosen.

The clothing must not give the effect of excessive nudity inappropriate for the discipline. Men must wear full length trousers and must not wear tights. In addition, in Ice Dance [Editor's note: Ice dancing is a different style of competition than figure skating, with it's own set of rules], ladies must wear a skirt. Accessories and props are not permitted. Clothing that does not adhere to these guidelines will be penalized by a deduction.

The decorations on costumes must be non-detachable. Part of the costume or decoration falling on the ice will be penalized by a deduction.

In short, women's costumes don't have to follow a specific formula. Yes, most competitors stick to the glitzy, skirted bodysuit situations that our brains automatically associate with figure skating — but over the years, many have put variations on the classics. The odd badass bodysuit happens from time to time, and many use their costumes as an opportunity to express themselves,

Michelle Kwan, for example, popularized a look that was more swimsuit than skating, eschewing beaded sleeves for spaghetti straps.

Costumes also run the style gamut, and range from DIY imagination (Figure skating legend and 1976 gold medalist Dorothy Hamill, for instance, wore super simple, floating designs — her first costume was made by her mother's friend) to inspired by the runway (Vera Wang, for example, has collaborated with many Olympic figure skaters on their looks, including Nancy Kerrigan and Michelle Kwan). Keeping all of these creative decisions in mind, skaters have to consider that the rules are pretty subjective: What's perfectly acceptable to one judge might be "garish" or "too theatrical" to another.

"I have been close for being docked points but, it has never happened," Marissa Castelli, an Olympic bronze medalist and two-time national champion tells Bustle. "One time we had a gold dress that had the whole back open and cutouts on the front with nude mesh. The rule is you have to be 50 percent covered with material, which I was but, it depends on how tastefully you do it. My dressmaker loaded up my dress with sparkles so you never knew when the dress ended. I had a few judges question it but, after a year of wearing it I still never received any costume violations."

Despite the relatively vague assessment metric for women's costumes, there is one black-and-white rule is that men can't stray from: No leggings.

"[Men] can wear a tapered pant, but if it is a tight, that's a reduction in your score," two-time Olympian Johnny Weir told Cosmopolitan. While there's no official explanation for the rule, one could speculate that the mandatory pants-not-leggings rule may have something to do with controlling the presence of bulge. Bustle reached out to The International Skater's Union for comment on these rules, but has not received a response.

Unlike the dress code, the actual rules of competitive figure skating — which has been around for over 100 years — are complicated enough to make your head spin. From Sports Illustrated:

The women's individual short program​ must have these seven required elements: ​Double or triple Axel Paulsen; Triple jump immediately preceded by connecting steps and/or other comparable Free Skating movements; Jump combination consisting of a double jump and a triple jump or two triple jumps; Flying spin; Layback/sideways leaning spin or sit or camel spin without change of foot; Spin combination with only one change of foot; Step sequence fully utilizing the ice surface. The women's free skate program must have these elements: maximum of seven jump elements (one of which must be an Axel type jump); maximum of three spins, one of which must be a spin combination, one a flying spin or a spin with a flying entrance and one a spin with only one position; maximum of one step sequence; maximum of one choreographic sequence.

Perhaps it's not an accident that the rules for the skaters' costumes are kept relatively lax — after all, there's a lot to keep in mind when you're on the ice, and whether your butt cheeks are showing or not.