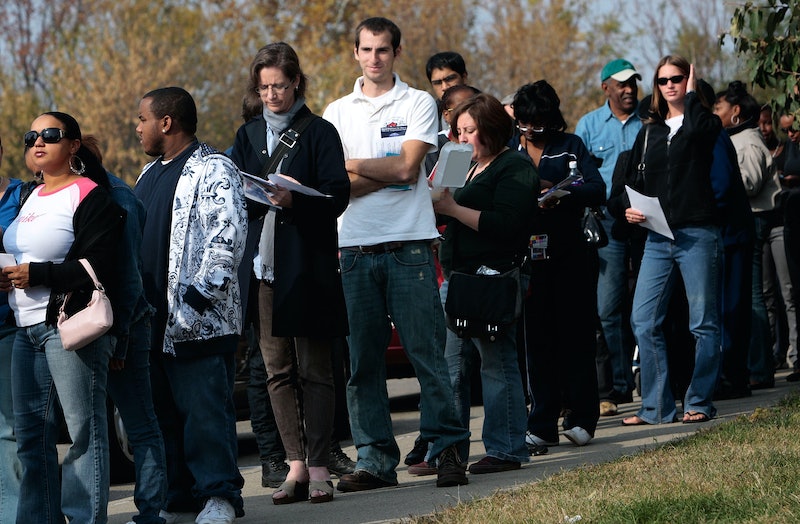 On Sunday, the American Civil Liberties Union (ACLU) launched the Let People Vote Campaign, a nationwide effort to fight voter disenfranchisement. But what exactly is it? The ACLU's national political director went on MSNBC earlier in the week and explained exactly how Let People Vote intends expand voting rights.

The campaign has a few specific goals, most of which are state-specific:

It makes sense that a national campaign to roll back voter disenfranchisement would be tailored to each individual state, simply because most voting laws are implemented at the state level.

"We have a lot of great ideas to make our national voting laws better, but none of them are going to pass [Congress], so you have to do it at the state level," Faiz explained. "The only way is to have each state being able to execute their top voting rights priority."

In some states, it's clear what activists who sign up for the campaign will be doing. Floridians who sign up for Let People Vote, for instance, will be gathering signatures to get a voter enfranchisement initiative on the state's ballot. In other cases, it's a bit unclear; what role, exactly, will grassroots activists play in filing lawsuits against states with voter ID laws? Bustle has reached out to the ACLU for clarification on that and other aspects of the campaign.

Regardless of the methods, a campaign to roll back voter suppression laws is crucial, and this was the case long before Donald Trump was elected president. To take just one example, 200,000 eligible voters were disqualified from voting in Wisconsin in 2016, according to a study by Priorities USA. Trump won that state by less than 23,000 votes. This effect fell disproportionately on black voters in the state, the study also found.

Granted, that study was conducted by a progressive advocacy organization, but its not the only analysis to arrive at the conclusion. The Government Accountability Office found that voter ID laws in Kansas and Tennessee decreased voter turnout by 1.9 and 2.2 percent, respectively, in the 2014 midterm elections.

Likewise, judges have repeatedly struck down state-level voter ID laws on the grounds that they unfairly deny citizens the ability to vote. In August, a federal judge placed a permanent injunction against a Texas voting law, ruling that the law was "enacted with discriminatory intent — knowingly placing additional burdens on a disproportionate number of hispanic and African-American voters." A federal appeals court struck down a North Carolina voting law on the grounds that it "restricted voting and registration in five different ways, all of which disproportionately affected African Americans," and that the Republican legislators who wrote the law "target[ed] African Americans with almost surgical precision."

Although those results might sound encouraging, plenty of restrictive voting laws are still on the books. In 2016, Republicans in Ohio passed a law eliminating last-week voting registration in the state, and the Supreme Court let it stand, while Michigan Republicans successfully passed a voter ID law after the election that's still on the books.

The situation has become even more since November. After falsely claiming that "millions" of non-citizens voted in the 2016 presidential election, Trump proceeded to create a "voter integrity" commission, which then asked all 50 states to give sensitive personal data on all of its registered voters to the federal government. For the record, there were a total of four (4) documented cases of voter fraud in the 2016 election.

Fighting voter suppression is one of the most important things a citizen activist can do. After all, it's elected officials who pass voting laws — and when the system by which those officials are elected is corrupt, there's no hope of overturning those laws. It's a vicious cycle, and taken to its logical extreme, it could well lead to permanent, anti-democratic rule. The ACLU is well aware of this, and that's why they've launched this new campaign. You can find more information about it here.