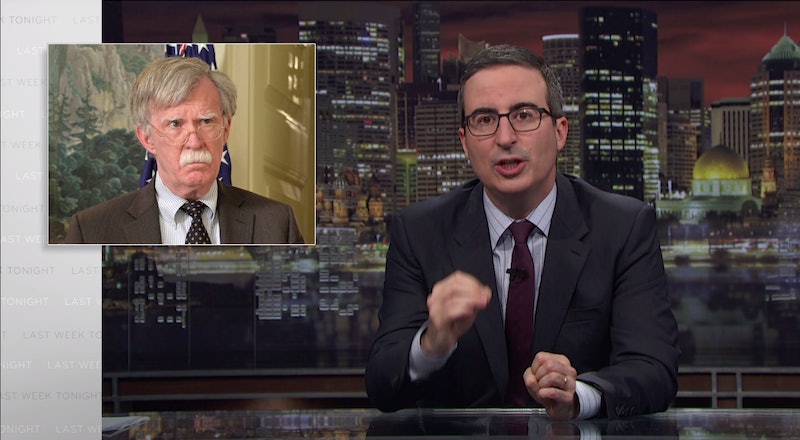 Last Week Tonight with John Oliver/HBO
By Sarah Friedmann
May 21, 2018

On Sunday's episode of Last Week Tonight, host John Oliver addressed the Libya model, taking John Bolton, President Trump's National Security Advisor, to task for suggesting it could be used when negotiating with North Korea. Considering Oliver's strong stance on the issue, you may be wondering what exactly the Libya model is and how it relates to the upcoming North Korea summit.

Oliver's criticism came after Bolton suggested in a recent television interview that he thinks "we're [the United States] is looking at the Libya model of 2003, 2004," when it comes to approaching upcoming negotiations about nuclear disarmament with North Korea. As Oliver explained, "the Libya model involves a deal that the U.S. and others struck to get Libya to give up its nuclear weapons program." This method involved convincing Libya to allow American observers into its nuclear sites, among other things.

However, as Oliver astutely pointed out, the example of the Libya model "is somewhat tainted," because, years after Libya denuclearized, Libya's former leader, Muammar Gaddafi, was ultimately forced from power. As Oliver noted, the former leader was killed and dragged through the streets, something which was captured on a widely-shared video.

As Global News pointed out, Libya's denuclearization and Gaddafi's removal from power occurred at different times (the former in 2003 and the latter in 2011). However, mentioning Libya often evokes images related to Gaddafi's ouster and, for some dictators, could represent evidence of how the West can quickly change its stance toward other regimes. Thus, mentioning the "Libya model" was not necessarily a prudent decision by Bolton in terms of approaching the upcoming North Korean negotiations. As Oliver pointedly asserted, "Bolton bringing up Libya was literally the worst thing he could have said in this situation ... "

Indeed, Bolton's remarks were so controversial that they caused Trump to have to publicly backtrack on what his National Security Advisor said — a surprising move for the president. As Oliver described,

To give you a sense of just how badly Bolton screwed up here, Trump actually walked his comments back. Yes, Donald Trump, a man who would double down on a f***ing typo, went on TV and said this, 'Well, the Libyan model isn't a model that we have at all, when we're thinking of North Korea ...

North Korea was not pleased with Bolton's remarks, issuing a statement condemning the comparison to Libya. The statement, which was broadcast on the country's Central News Agency last Wednesday, eviscerated American officials for the comparison, saying:

[The] world knows too well that our country is neither Libya nor Iraq, which have met miserable fate ... It is absolutely absurd to dare compare the DPRK, a nuclear weapon state, to Libya, which had been at the initial stage of nuclear development.

Oliver wrapped up his Libya model segment by suggesting that Bolton mentioning the Libya model was so egregious that it could cost him his job. As the late night host noted:

Look John Bolton, how can I put this to you, what you did, in terms that you might understand. Your decision to say the words 'the Libya model' may have put your time in the White House on the path of the 'Scaramucci model' — a model which means you shoot your mouth off, get fired quickly, and end up posing for photos in front of a frozen yogurt shop with which you share a dumb nickname.

Overall, it is clear that Oliver, like many, believes that Bolton made a significant error by suggesting that the United States could approach the upcoming North Korea summit using the "Libya model." As the summit nears, many will be taking note of whether or not Bolton continues to publicly address North Korean issues — or if the administration no longer wants him to comment on the summit.