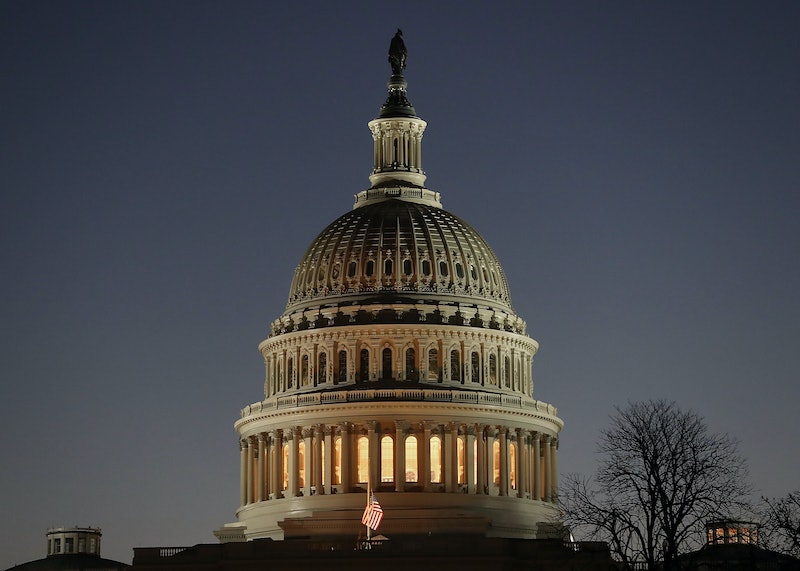 We're now on week two of the third government shutdown in President Trump's term. Twenty-five percent of the federal government is without funding, and it's looking as though that won't be resolved until 2019. But at nine days as of Sunday, this closure is far from what the longest government shutdown ever looked like. That title belongs to the 22-day furlough between December 1995 and January 1996.

The three-week shutdown was essentially a conflict over tax cuts and federal spending levels between President Bill Clinton and Republican House Speaker Newt Gingrich. Gingrich and his party wanted to slow federal spending, but Clinton wasn't willing to slash things like social programs and a 1993 tax increase that Republicans wanted to get rid of. As government agencies ran out of money, Gingrich refused to raise the national debt ceiling, and on Dec. 16, the federal government came to a standstill.

"I think [Gingrich and the Republicans] deeply believed that they were going to show to the country just how deeply they believed they were right by shutting down the government," Leon Panetta, Clinton's Chief of Staff said in an interview with the University of Virginia's Miller Center.

In the weeks that followed, Gingrich and other congressional negotiators met with Clinton to try to iron out a budget, eventually settling on a compromise that would include some modest spending cuts and preserve tax increases. Still, the complications of a nearly month-long shutdown were huge. According to The Washington Post, tourism in national parks and federally-funded museums came to a halt, agencies incurred an enormous backlog of passport, visa, and loan applications, and nearly 300,000 federal workers were placed in limbo.

A lot of that might sound familiar, given that we're currently in a similar situation. Almost 400,000 federal employees are furloughed at the moment, and another 400,000 are temporarily working without pay. Backlogs in immigration court cases continue to mount, and many national parks facilities remain closed.

Since President Trump's Oval Office meeting with Democratic minority leaders Nancy Pelosi and Chuck Schumer earlier this month — the one in which Trump said he'd take full responsibility for a shutdown — there's been a lot of chatter about who is "at fault" for the current furlough. In that regard too, it was pretty much the same back in 1995.

"It was all a blame game, who was going to get blamed, and the Republicans were hoping that Clinton would get the bigger share," Panetta said in his interview.

Ultimately, the consensus ended up being that Clinton came out on top. Polling numbers showed most people blamed Republicans for being stubborn. Clinton's approval rates steadily increased after January, and he went on to win the presidency that fall.

The shutdown "[gave] Bill Clinton the opportunity to identify who he was with the public in contrast to what Gingrich and the Republicans wanted to do," Panetta told the Miller Center. It was "one of the deciding moments in terms of the President’s ability to get reelected in ’96," he said.

Our current shutdown is in large part a disagreement over border security spending — the president is insisting on $5 billion for a border wall, and Democrats are unwilling to give in, pushing instead for a $1.3 billion border security package. Even after Congress reconvenes this week, a split Congress indicates that funding negotiations will likely drag on well into January.