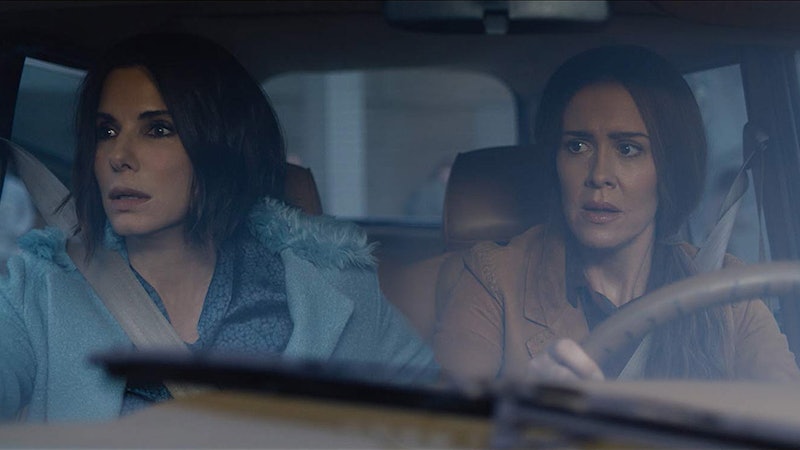 Spoilers ahead. The most terrifying creatures may be the ones we can't see — our imaginations take over and warp whatever's possible into a potential of the worst. But in upcoming apocalyptic horror story Bird Box, out Dec. 21, that's actually what the creatures are. The only indication they're near is gusting leaves and trees, along with a haunting whisper of familiar voices. What's the Bird Box monster, really?

It's the embodiment of your worst fears. Whatever people are seeing, and we can only ever guess, is bad enough that just glimpsing it drives most people to immediate, violent suicide to escape it. The most frightening part of all is that there are a few people, escaped patients from an asylum for the criminally insane, who survive looking upon the worst image their own brains could conjure — and they become vicious evangelicals running around forcing others to see the world through their new eyes.

The book that the movie is based on is no clearer as to what the monsters are. They weren't even understood to be separate creatures until those who survived the initial incidents, lumped together as "The Problem," realized it wasn't an airborne contagion or contaminant, but an active agent waiting to be seen. In the film, their physical presence is proven by a terrifying scene where a group attempts to head to a grocery store for supplies — navigating solely by map-based GPS and sensors, they maneuver slowly down the street. At one point in what should be an empty stretch of road, all the sensors suddenly go off, and the car is rocked by an unseen — rather, a can't-be-seen — force. Their invisibility is a narrative convenience for us; we can never know what each person seeing them sees, so they remain a non-sight for us, who see just their void whipping around characters refusing to look.

Whatever the effect they have on the human body, it hits the entire optic nerve and cornea, as well as the amygdala. We like to think of ourselves as creatures of thought and body, two separate elements, but the creatures of Bird Box show how inextricably linked they are. Fear is as much a mental as it is a physical response, and in this cases both are overloaded to the point of death. Moments before they succumb, those who've seen the creatures also get a distinct mottling on their irises, something survivors check for before letting other survivors in.

The mottling is a physical mark transferred by whatever viewing the creature does to the human body, otherwise they can't seem to do anything but use the voices of others to urge people to look at them so they can affect them. They can't even open doors; they have to be "let in" by someone intentionally or accidentally, they certainly can't tear down barriers that people have put up to avoid seeing them, though they are able to displace air enough to rock a car.

But ultimately, what the creatures are doesn't matter half so much as what they represent — an ever-present Lot's Wife temptation to look upon something that will instantly destroy you, something dredged from the depths of your own mind.

More like this
Here’s Everything Coming To & Leaving Netflix In February
By Jake Viswanath
Twitter Is Mad At The Razzie Awards For Nominating A Child For Worst Actress
By Radhika Menon
Jemima Khan Used Her Own Life As Inspo For 'What’s Love Got To Do With It?'
By Darshita Goyal
Here's How Netflix Should Adapt Prince Harry's Memoir Into A Movie
By Ginny Hogan
Get Even More From Bustle — Sign Up For The Newsletter
From hair trends to relationship advice, our daily newsletter has everything you need to sound like a person who’s on TikTok, even if you aren’t.