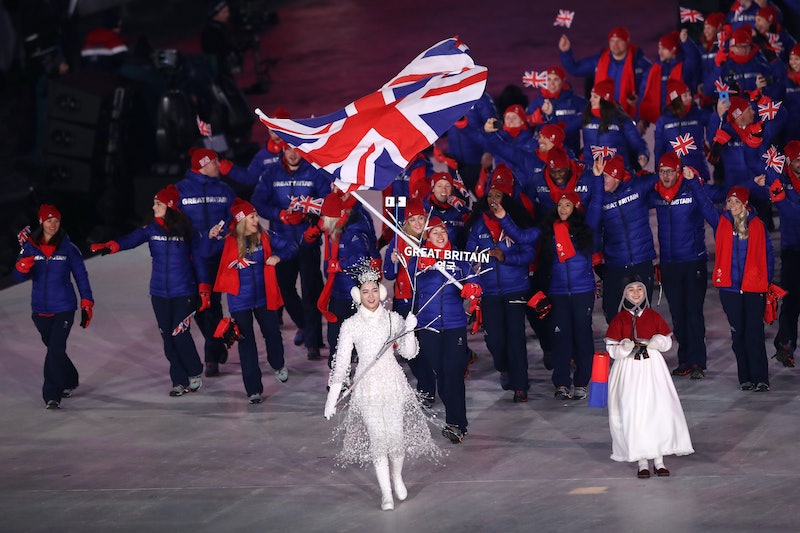 One of the most anticipated events of the Olympic opening ceremony is the parade, in which the athlete delegation from each country enters the PyeongChang Olympic Stadium bearing their flag. As with everything else in the ceremony, the order in which the countries enter is symbolically important. So, here's the order of countries during the Parade of Nations in the 2018 Winter Olympics.

Exactly 92 nations, as well as a partial delegation from Russia, were in this year's parade. That's the biggest number in history, and it includes the Winter Olympic newcomers of Singapore, Eritrea, Malaysia, Ecuador, Nigeria, and Kosovo. The biggest delegation is from the United States and includes 242 athletes. The U.S. delegation is also the largest in the history of the Olympics. Many countries have very small delegations, though; Albania, for example, sent just two athletes to the games.

Greece enters first, as always, because they are the creators of the Olympic tradition. The host nation — South Korea, this time — always goes last. South Korea and North Korea are marching together under one Korean unification banner this year. Beyond that, the countries will enter alphabetically according to the Korean alphabet. Here's the official order:

86. The Former Yugoslav Republic of Macedonia

The name of each country is announced in three languages: French, English, and Korean. French and English are the official languages of the Olympic Games.

Russian athletes were able to join the parade, but because of the recent doping scandal that threatened the Olympic participation of its entire delegation, it was not permitted to do so in the glorified manner of the other nations. Its athletes did not bear the Russian flag or wear Russian paraphernalia. Instead, they wore gray coats and white scarves and marched under the Olympic flag.

Besides the more somber aesthetic of the Russian athletes, one of the most notable parts of the ceremony was the unified delegation of the two Koreas. Commenting on this event — which had not happened in over a decade — the president of the International Olympic Committee, Thomas Bach, spoke to the crowd of "the unique power of sport to unite people."

"A great example of this unifying power is the joint march here tonight of the two teams from the National Olympic Committees of the Republic of Korea and the Democratic People’s Republic of Korea," he said. "We thank you."

More like this
Jude Bellingham’s Superstar Football Talent Runs In The Family
By Maxine Harrison
The David Beckham Qatar Controversy, Explained
By Sophie McEvoy
Read Dan Levy's Heartbreaking Message After The Club Q Shooting
By Stephanie Topacio Long
My Lip Color Lasted Through A 3-Course Meal, Thanks To This Viral Lip Stain
By Isabella Sarlija
Get Even More From Bustle — Sign Up For The Newsletter