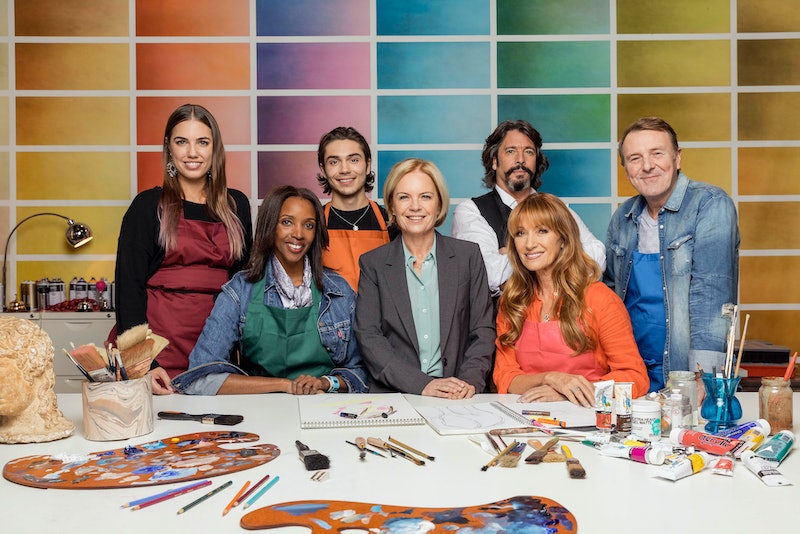 In my opinion, there just haven't been enough art-based shows recently. Remember when your TV guide was lit up with them back in the day? Kids had their Art Attack and SMart, and everyone else had Bob Ross and Portrait Artist of the Year. Now Celebrity Painting Challenge, a new BBC show that'll see six celebs putting their artistic skills to the test, will be coming to shake things up. The celebs have been primed and aproned, but what's the prize on Celebrity Painting Challenge?

Kicking off on Thursday, April 4 at 8 p.m. on BBC One, Celebrity Painting Challenge will see six celebs competing for the prize of sheer glory. In other words: there's no prize. Not in the traditional sense, anyway. While the best painter will be decided at a grand finale, according to a BBC press release, the real prize will come when all six of the contestants get to choose one of their paintings from the series to be auctioned off, with all proceeds going to charity. But there are several challenges that stand in their way before they get to that.

The new BBC show is hosted by Mariella Frostrup, a journalist, actress, and writer who's appeared in the likes of Absolutely Fabulous, and who — fun fact — happens to be the voice used in the lifts of the London Overground, as the Mirror reported back in April 15, 2018.

Celebrity Painting Challenge will run for four episodes, culminating in a grand finale on Thursday April 25, according to the BBC. The art show will feature challenges ranging from the humorous to the downright tricky.

Among the celebs about to go to battle with their paintbrush is Union J member George Shelley, the Radio Times reports. Joining him will be design expert and iconic waistcoat wearer Laurence Llewelyn-Bowen, as well as Jane Seymour — no, not Henry VIII's ex — the actress who's probably best known for appearing in the Bond film Live and Let Die.

Then there's a bit of a wildcard, which comes in the form of sports TV personality and cricketing legend Phil Tufnell. Also appearing will be model and presenter Amber Le Bon, who just so happens to be daughter to Duran Duran lead singer Simon Le Bon, and modelling superstar Yasmin Le Bon. The final contestant will be Josie d'Arby, who's had many high-profile presenting stints, as she's appeared on Inside Out and BBC Proms in the Park.

Whether any of these six celebs actually possess the artistic talent required for this show is yet to be seen, but you can expect to see some hilarious and surprising results when the first series of Celebrity Painting Challenge kicks off on Thursday. Hopefully, this'll be the beginning of an art TV renaissance, and I'm also hoping that I'll get to see some really awful paintings, as well as some awesome ones, when my new favourite show begins.

Celebrity Painting Challenge will air Thursday, April 4 at 8 p.m. on BBC One.

More like this
After The Bling Ring, Nick Prugo Was Embroiled In Another Scandal
By Arya Roshanian
Stormzy Made A Passionate Speech About The Importance Of Diversity
By El Hunt
Snoop Dogg & Michelle Pfeiffer Lead Moving Tributes To Coolio
By El Hunt
Meghan Markle Might Be Returning To The UK For A Very Special Reason
By Sam Ramsden
Get The Very Best Of Bustle/UK