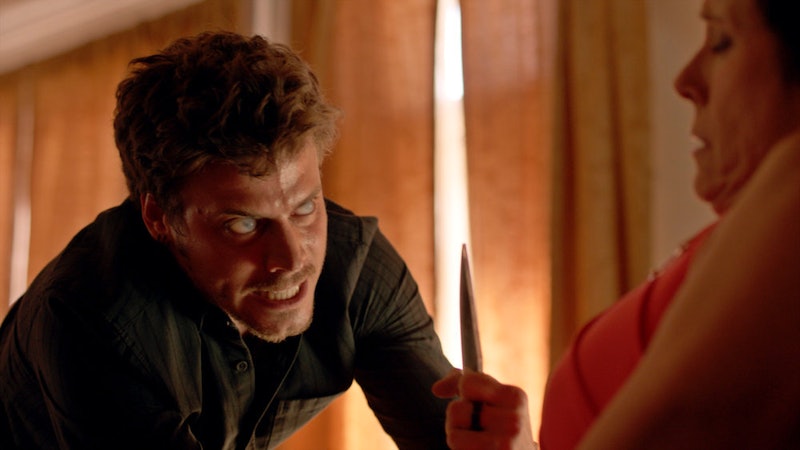 Grandmothers are usually trustworthy — especially ghost grandmothers with nothing to lose — but I'm betting than Manfred's grandmother on Midnight, Texas didn't know what she was sending her psychic relative into when she told him to move. The NBC summer fantasy series got off to a wild start in the July 24 premiere, especially in that compelling cliffhanger. What's under Manfred's floor in Midnight, Texas? His living space is unfortunately already occupied.

After arriving in town, Manfred quickly gets involved in a recent murder mystery and an ordeal that ends with the town witch displaying her powers to save a friend. At the end of the episode, however, a darker force makes its presence known. As Manfred walks home from the confrontation, he sees his little house lit up red, with dark figures moving about. Combine that with the red glowing and growls that Manfred noticed under the floorboards earlier, and you've got a real infestation problem.

Fiji tells Manfred in the middle of the episode that Midnight sits on "powerful mystical energy," where the veil between life and death is thin. Maybe Manfred's house is on a tear in that fabric, creating a portal. It definitely seems like something from the other side is trying to break through. Knowing a show like this, it will probably succeed.

Maybe some ghosts are just having a non-threatening party — but it seems more likely that this is a demonic presence living underneath the psychic. If you've read the Charlaine Harris novels the show is based on, you might have a better idea of what lies beneath. This freaky thing from the trailer might be a clue as well. Check it out:

I have so many questions after this first episode. How much does Creek know about the town, exactly? Who is Olivia's Dad? How is Grandma Xylda involved in all of this? Who or what is Hightower? All of that said, this haunted house situation seems to be the most pressing problem, even for a psychic medium. If you're going to move into Midnight, Texas, you want to be able to sleep at night. Manfred doesn't quite fit into town yet, but he should probably get that glowing floor looked at.