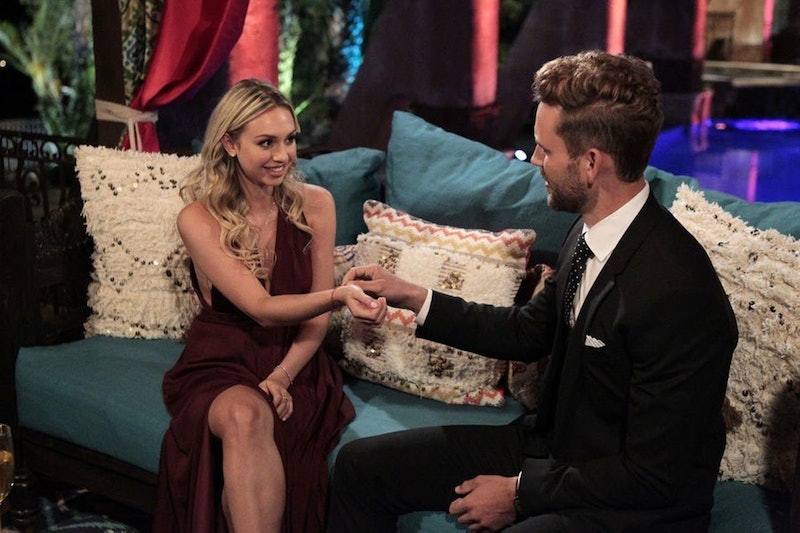 On this week's episode of Will You Accept This Podcast, which you can check out here, Bustle Senior Entertainment Editor Kelsea Stahler and Romper Senior News & Entertainment Editor Allison Piwowarski dove deeper into the Corinne situation. Between Corinne's drunken monologues, incidents of jealousy, the whipped cream moment, and Nannygate, she has certainly given fans a lot to discuss. This week especially, it's starting to look like she has become a distraction from even Nick himself. She keeps reiterating that she is very confident and very sure of herself and that that must be the reason that everyone in the house has a problem with her. Fans of the show are starting to feel like that simply isn't the whole story, though.

Allison thinks that Corrine is simply deeply insecure. Her actions may seem like she is tough and not caring but, if you take a closer look, her behavior screams out for her own need for validation. Allison also thinks that if this were Vanessa saying and doing the things that Corrine is saying, we all would give her more of a pass. I agree with that on some level because I do think that Corrine immediately was given a villain role from the jump. This week, her actions wouldn't be cute on anyone though.

Chris Harrison has a completely different take on Corrine. In his Yahoo blog post for this week's episode, he echoed what Corinne is always saying about being very secure and confident. And, an interesting note is that he mentioned in the blog that we would see a lot more of Corinne's antics over the next few weeks. As he wrote:

"Corinne is so fascinating to me. She is unapologetically herself, and while that makes her so refreshing, it makes sense why the rest of the women in the house found her actions disconcerting. Being on The Bachelor is a difficult situation for all involved. Even the mildest provocation can have dire consequences. This is only the beginning of Corinne’s journey, but I guarantee you will see her differently in a few weeks."

Apparently, Nick won't be sending her packing anytime soon, which might shock a lot of fans and further anger all of the other contestants in the house. But, I guess that spells for good TV. Let's just hope Nick, the other contestants, and Corinne herself don't get too hurt in the process. Because, villain or not, she's still a real person who seems to have some insecurity issues at the heart of all her outrageous actions.