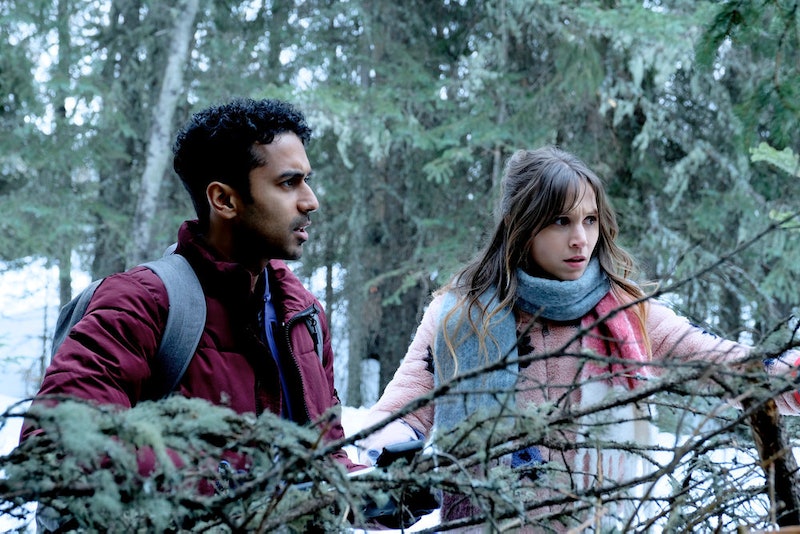 Spoilers for Wynonna Earp Season 3, Episode 9, "Undo It." Nicole (Katherine Barrell) is trying to remove Bulshar's ring from Waverly's (Dominique Provost-Chalkley) finger at the start of Wynonna Earp Season 3, Episode 9. Audiences will recall that Doc (Tim Rozon) wore this gem on his hand, but he had to take it off after becoming a vampire. Since then, it's been bouncing around, showing up in random places, and seemingly following people. And when Waverly put on Bulshar's ring in Episode 8, she discovered that it gave her supernatural abilities. So how is Waverly connected to Bulshar, and why does his ring respond to her?

When Waverly suggests she just keep it on, her girlfriend says, "Uh, you Wonder Woman-punched a zombie witch across a room." She goes on to say, "That ring came off a withered, chopped-off demon arm, it turned a face-ripping witch into the mother of dragons, and it burnt Doc's finger, and it turned up in my biscuits!" Need she say more, Waverly?

Meanwhile, Wynonna and Doc are stuck in a sick video game, orchestrated by Bulshar himself. At the end of Episode 8, he found them in the barn and blew some white flurries onto their faces, which appeared to sedate them. In "Undo It," the gunslinger encounters impossible architecture as she ascends and descends the stairs at Shorty's. In reality, however, she, Doc, and Bobo (Michael Eklund) are all tangled up in some branches out in the snow. During the course of this maze, Wynonna also discovers what Bulshar wants — Peacemaker. The demon needs Wyatt Earp's gun in order to enter the Garden of Eden. What's more, it's what the tower stood for in his Tarot cards.

Nicole and Waverly then go to the Gardner house, where they discover Mercedes (Dani Kind) herself. Audiences last saw her after one of Bulshar's wives stole her face in Season 2. Since then, she's attempted plastic surgery to restore her face to its former glory, but so far, nothing has worked. "There's a woman in Venezuela," she says hopefully to Nicole and Waverly. "Muy underground, hashtag facial reconstruction."

However, Derek inconveniently shows up and tries to steal Bulshar's ring. Waverly shoves her left hand (which holds the ring) into the demon's face, which burns and kills him. Um, Waverly? What's going on? As she later explains, "It's like the ring — my hand had a mind of its own." And when Mercedes complains that her face looks like a charcuterie board, Waverly touches the woman's face with her left hand and says she's still beautiful.

So how can they remove the ring, and why is Bulshar's property responding to sweet Waverly? While it's not revealed in this episode, it's clear that they're linked, just like Wynonna and Bulshar are linked. As Nicole points out, "If demon magic's what's keeping that ring on, then maybe we need demon magic to get it off." However, as a safety, Mercedes gives Waverly a Niagara Falls oven mitt so she doesn't melt off any more faces.

Fortunately, Nicole, Waverly, and Jeremy (Varun Saranga) are able to save Wynonna, Doc, and Bobo, but not before she surrenders Peacemaker to Bulshar. And what else could she have done? The demon was threatening the lives of her friends, and just because she escaped the maze doesn't mean he can't do it all over again. That being said, they're now powerless against him. That is, unless Waverly can really wield that ring for good. But if audiences know anything about Lord of the Rings, wielding a demonic ring rarely ends well.

However, it does manage to give Mercedes a supernatural facial: She removes her bandages and realizes her face is completely healed. "Mercedes Gardner is back, suckers!" she exclaims. "Waverly Earp, you sweet little lesbian, you did it! You healed me!"