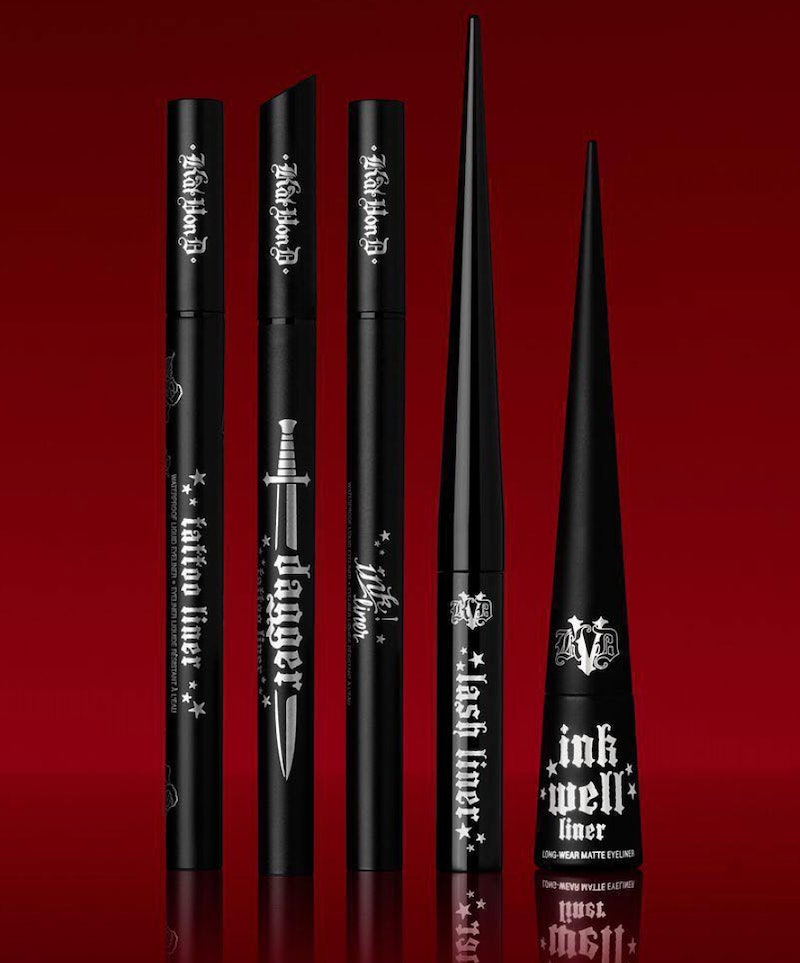 A beauty brand's hero product is beloved by fans and customers due to its performance and formula. Kat Von D's Trooper Tattoo Liner is adored for its skip-free, super inky, wing-creating, and long-lasting formula. Kat Von D Beauty has created three new versions of its Trooper black eyeliner. But do not panic — the original and best-selling Tattoo Liner isn't changing nor is it going away. That would be total makeup blasphemy. Instead, it's getting some "sisters" — that is, three new editions that will join and enhance the Kat Von D black eyeliner (and beyond) family this summer.

Since Kat Von D Beauty is known for its dark, romantic, and gothy aesthetic, it makes total sense for the brand to extend its black eyeliner assortment. As most Kat Von D-evotees and makeup lovers understand, you can never, ever have too many black eyeliners. There are so many textures, formulas, iterations, and brands on the market — from felt pen to pencil to gel pots and more!

However, with the addition of three new black eyeliners, Kat Von D can be your one stop shop and the "go to" for essential black liners.

The KVDB black eyeliner arsenal boost is taking place over the next few months. It's seriously all the black eyeliner you will ever want or need. Your flick and your rim will be unmesswithable.

Oh, and here's a KVD tip for all of the brand's liquid liners. Store 'em with the tip down so the formula flows freely. Now, here's what to expect in the coming weeks.

The Lash Liner is a waterline liner and it will be available as of Friday, July 20 via Sephora stores, the Sephora site, and the Kat Von D Beauty site. It's $20 and it comes in Trooper, which is a satin black.

It's a long-wear, water-resistant formula designed to work with the waterline. That face real estate is always a challenge since the wetness of the region can cause any and all eyeliner pigments to wear away. If an intensely rimmed and pigmented waterline is what you seek, you will get it, courtesy of this liner.

Lash Liner offers the intensity of a liquid liner minus the smudged, raccoon eyes that are often a result of using old school pencil liners on the waterline. Lash Liner glides on and dries quickly — it sets in merely 15 seconds. The hybrid Fluid-Gel formula contains clay binding ingredients. That translates to a richer texture and formula that goes the distance and isn't faded by watery eyes. The soft-tip applicator was designed to hold and apply the right amount of product.

Here's how you use it: Pull down the skin under the eye and expose the waterline. Dip the applicator and then dab on the waterline until the intensity you desire is achieved. Hold the lid down and avoid blinking for 15 seconds so it sets. Boom. You're done. This formula was four years in the making — welcome to the KVDB fam!

The Dagger Liner is $20, comes in Trooper, and is the Tattoo Liner's "kid sister." The geometric tip was designed to help you create the perfect "Kat" eye flick. It arrives on Monday, Aug. 20 via the Kat Von D Beauty site and the Sephora site. It lands in Sephora stores the same day. It was specifically engineered for easy application with any eye shape. The pen boasts an angled brush tip with a 30-degree edge. That means you can create straight lines easily. It is designed for users who are flick vets and for those are working diligently to master the art of the winged line. It's the only cat eye tool you will need.

According to the product description on the KVDB site, you simply place the Dagger along the eye area. We know, that sounds dangerous but this Dagger is totally safe. The tip allows you to craft a straight and precise line. No dragging, no makeup mistakes. You can quickly and easily create sharp, balanced, and beautiful wings. While the tip is different, the formula is the same as the beloved Tattoo Liner. So you know that ain't budging.

The Ink Well Matte Liners come in six shades, including Trooper Black. They are also $20 a pop and drop on Thursday, Sept. 20 via Sephora stores and its site, as well as the Kat Von D Beauty site. Ink Well is touted as the most bulletproof eyeliner from the brand. That's saying something, since the the Trooper Tattoo Liner is an immovable beast. Ink Well is designed to last for 24 hours and is waterproof, transfer-proof, and smudge-proof. The other shades are take inspo from the brand's most popular lipsticks and makeup.

The formula is anchored by something called "Weightless Flex Technology," which allows the matte color to dry quickly without fading or cracking. That precise felt tip applicator is modeled after the antique quill and ink system that Kat Von D herself uses for calligraphy lettering. Don't you love how self-referential the new liners are?

The Kat Von D Eyeliner family has three amazing editions that are all $20 and arrive on the 20th of each month. Your black eyeliner wardrobe is about to get a triply good update.

Bow down to the original and a classic.