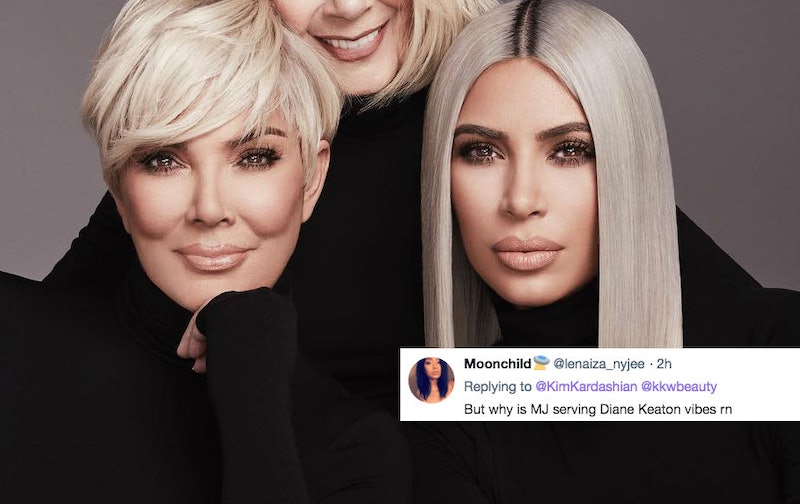 Word of a KKW Beauty concealer has been circling online for, well, a while to be honest. From Kim Kardashian's makeup artists mentioning them to Kardashian herself teasing the launch, fans have been anticipating the product for some time, and good news KKW lovers. The KKW concealer kits have a launch date, and it's sooner than you may think.

On Tuesday, Kardashian took to basically every social media channel she's got access to (and there are a lot) to announce that Concealer Kits were officially coming from the brand, and they've got a release date. The concealers will be coming to you on Mar. 23, but they're not alone. This is a kit after all. According to Allure, the concealers will be accompanied by two finely milled, loose powders made specifically for you to bake and brighten after your conceal.

The unique kit design isn't the only things that make this product unique from other brand's approach to complex products. In an exclusive interview with Allure, Kardashian explains that she wanted the formulas to be perfect and able to be used by beauty lovers of all ages.

"I wanted to show it's not always about these young, perfect models that are going to look good no matter what," she said. "We really had to make sure that the concealer worked on different skin types and ages as well, so it was important to show that in the campaign"

Perhaps that's why Kardashian included anti-aging ingredients into her formula. She explains that the formula was much more important to her than a release date. She said, "Not only did I want to make sure there were some ingredients to treat the signs of aging like ceramides and marine collagen, but I also wanted a blendable product that you could really build to achieve that lighter undereye effect without the concealer creasing."

Kardashian didn't just speak about creating concealers for everyone, she incorporated models from ages 20 to 80 into her campaign, and some of the faces happen to be family. In her first image from the launch announcement, Kardashian posted an image of she, mother Kris Jenner, and grandmother MJ. While you'd think that Kardashian would be the star of the image, she may have just to share the spotlight with the two other gorgeous ladies from her family, but mostly, MJ.

Twitters users were quick to comment on how amazing Kardashian's grandmother looks in the campaign images, and it's not the first time that she's been part of a Kar-Jenner cosmetics product. She's also got a Kylie Cosmetics lip kit named after her: Mary Jo K. It's the image, however, that's causing cries of "YAASSS" from the internet.

Some users noted a resemblance to actor Diane Keaton, and it's pretty spot on.

Blonde seems to suit her just as well as it suits Jenner and Kardashian.

A few people even seem to be insinuating that MJ may have stolen the show from the KKW Beauty owner herself.

Others are just simply blown away by how amazing she looks.

Really, though, the DNA in this family is so damn good.

Apparently, Kardashian also judges her products based on MJ's seal of approval. She told Allure, "I love testing things on my grandma...I mean, she's really smart and savvy, but she doesn't wear a whole lot of makeup. So if she can figure out and if she likes it, then I'm happy."

If you want to be one of the first to get the new KKW Beauty Concealer Kits, mark your calendar for Mar. 23. This 16 shade range with anti-aging properties certainly seems that a passion project for Kardashian, and if you're Kar-Jenner stan, they're a must-have.