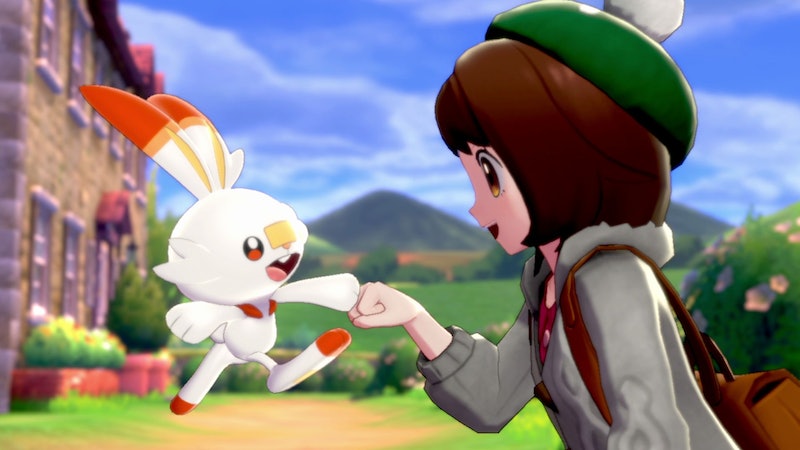 The Pokémon Company may have wowed fans at the end of May with a deluge of announcements for upcoming projects, but it was hard not to notice the absence of two highly-anticipated games in the franchise — Pokémon Sword and Pokémon Shield. That was until yesterday (June 6) when Nintendo broadcast a new Pokémon Direct — a presentation by The Pokémon Company that gave fans more insight into what they can expect with these new titles, along with the release date (finally). So when are Pokémon Sword and Shield out in the UK?

As was revealed during the presentation and the end of the trailer, Sword and Shield will be available worldwide this year on Nov. 15. The autumn release follows a schedule that began with Pokémon Sun and Moon in 2016, as prior to this the games were usually released earlier in the year. Sun and Moon also marked the first time that Pokémon games were launched worldwide, as opposed to being made available in Japan a year before the U.S., Europe, and Australia.

Both games are available to pre-order now on Amazon, Game, and directly from the Nintendo UK store. As shown at the end of the presentation uploaded to Nintendo UK's YouTube channel, it seems that you will also be able to purchase both games in a double pack which will include a gorgeous gold steel-book case. This edition hasn't been announced for Japan, North America, or Australia, so it looks like this may be an exclusive for European fans. This makes sense, since the Galar region featured in Sword and Shield are based on British culture and geography.

However, from looking at the sites where you can pre-order the games, I have yet to see this duo-pack listed. I've contacted Nintendo UK to see when this will be an option, but have yet to hear back. I'll keep you updated when it is eventually announced.

While 2018's Let's Go Pikachu and Eevee were the first Pokémon games to debut on a home console, these latest titles are the first in the main series of RPGs to be released on the Nintendo Switch following Pokémon Ultra Sun and Ultra Moon for the 3DS. The Let's Go series demonstrated what was possible for the Pokémon franchise on such a powerful console, and by the looks of what was revealed during the Direct, Sword and Shield are going to utilise the Switch's capabilities to the absolute max. Literally.

There were a plethora of new features showcased, but one that took many off-guard was Dynamaxing. Similar to special abilities in previous games like Mega Evolution and Z-Moves, Dynamax can temporarily transform and increase a Pokémon's size to increase their power and stats during battle. This can be used both in-game and online, through a new multi-player feature which is also a first for the series.

Speaking of firsts, the Galar region will also feature an expansive open-world zone called The Wild Area. Here, players will be able to control the camera as opposed to previous titles and explore a vast area of land inspired by the English countryside where Pokémon appear depending on location and weather. It's unknown whether this mechanic will be available throughout the region or only in this area, but it's a huge step forward for the franchise nonetheless.

Many more new aspects of the game were introduced like new Pokémon, the human characters you'll meet, and the football-inspired frenzy surrounding Gym challenges. But it's clear that The Pokémon Company only scratched the surface of Sword and Shield with this Direct, and are leaving a lot of surprise for fans when the games are released this autumn.