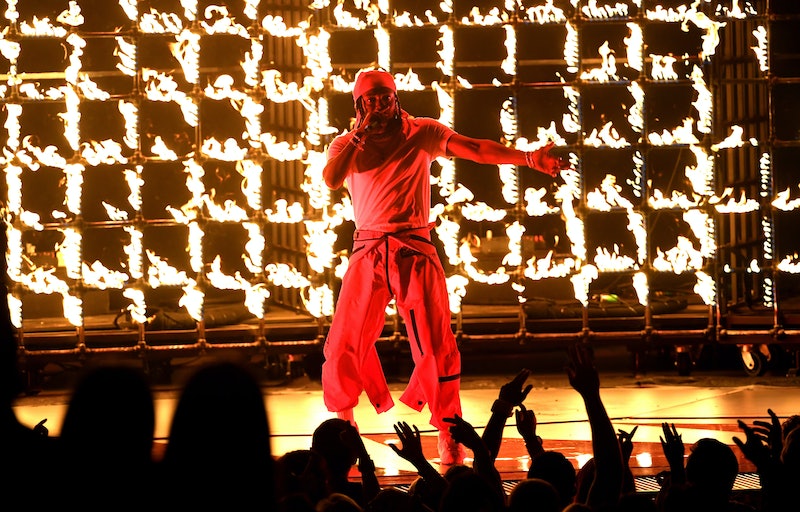 On Tuesday, MTV's signature Moon Person reemerged to make a very important announcement: when and where the 2018 MTV VMAs are happening. The upcoming award show will return to its OG stomping grounds at NYC's Radio City Music Hall. The ceremony is taking place on Monday, August 20. Performers, a host, and other celebrity appearances have yet to be announced, but if it's anything like last year's show, there will certainly be plenty of people on the lineup to get audiences talking.

The Moon Person made the announcement alongside the Mayor’s Office of Media and Entertainment Commissioner Julie Menin and executives from MTV and MSG Live, in, of course, NYC. The group announced details about the 2018 VMAs with a street renaming and symbolic "moon landing." The spectacle of course celebrated the fact that the first ever VMAs took place at Radio City in 1984.

Last year's event took place at The Forum in Los Angeles, but Radio City Music Hall is truly home to so many iconic moments for the show — this marks the 12th time the ceremony is being held there. Madonna's revolutionary "Like a Virgin" performance (in which she rolled around the stage in a wedding dress) took place at the venue during the inaugural 1984 show. Fans may also remember Eminem's iconic "The Real Slim Shady" performance in 2000 when 100 Eminem lookalikes lined up in the streets of NYC. The moment was deemed a career-defining event for the rapper.

It's tempting to relive the nostalgia of past VMAs, especially since the show seemed much more wild and uncensored back in the day. But the 2017 VMAs did have a handful of moments that audiences have continued revisiting and talking about. Can the 2018 VMAs top last year's show? Fans will see.

A moment that stood out from last year's show was Kendrick Lamar's wild and politically-charged show opener, in which the rapper performed "DNA" and "Humble" among a blaze of fire. Another show-stopping moment was when Fifth Harmony addressed Camila Cabello leaving the group in a totally unexpected move. During the song "Angel," the four remaining members sang at the top of a platform when a faceless fifth member in the center was blown backwards and pushed off the stage (pictured above).

Of course, last year's show was also recognized as perhaps one of the most political VMAs. Guests spoke to issues like the white nationalist rally in Charlottesville, President Trump, NFL members' support of Black Lives Matter, and the transgender military ban.

While some praised the show for bringing these issues to the stage, fans also complained that the show was too political instead of being about the music. Seeing as how political tension has only heightened in the last year, with events like March for Our Lives and the second annual Women's March, fans probably shouldn't expect celebrities to be any less quiet about political points of view during this year's show.

Hopefully, though, the 2018 show will continue to be a celebration of music. This year has already seen a handful of breakout artists like Cardi B and Khalid thrive, and hopefully the VMAs will provide a stage for them to show off their hard work, talent, and hard-earned place in the music landscape. And if audiences are able to watch household and some legendary names in the music industry do their thing as well, there definitely won't be many complaints in that area.

But the upcoming show should definitely be special since it's returning the place it all started. “New York City’s creative energy has always fueled those who live and work here. This is where music, film, and art collide and where the Video Music Awards were born,” said New York mayor Bill de Blasio, according to a press release. “There is no better place to host the MTV VMAs than in New York City at one of the most iconic venues in the world.” Let's hope celebrities really make this a celebration to remember.