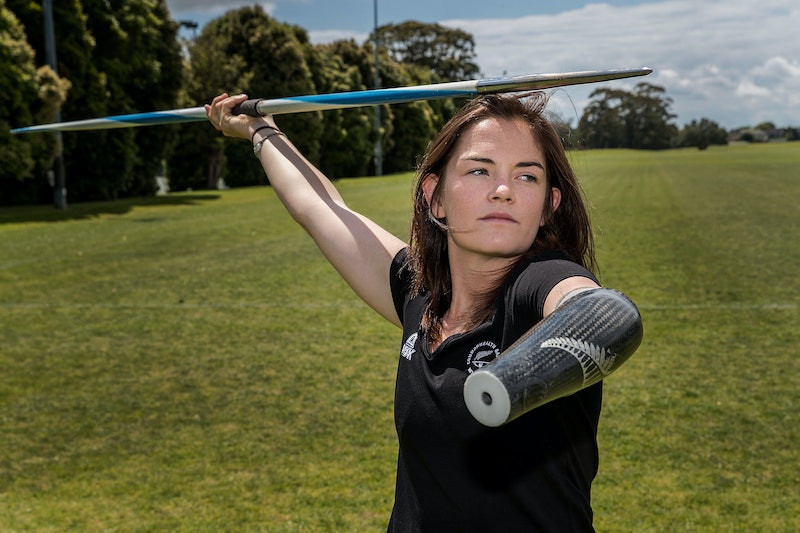 Just weeks after the Winter Olympics' official closing ceremony, the 2018 Paralympic Games will begin. Specifically, the games will start on Mar. 9, and Mar. 18 is scheduled as the official day to wrap it all up. Just like the 2018 Winter Olympics, the Paralympic games will take place in PyeongChang, South Korea, and will cover the performances of 670 athletes.

This number is worth mentioning, as it's considerably higher than the number of Paralympic athletes in the Sochi, Russia games from four years ago. In 2014, 539 sports professionals joined the Paralympics but this year the number has gone up by 24 percent.

On the gender front, there's also a pleasant change: This year's athlete makeup reflects an increase in participation from women athletes. According to the Paralympic Games for PyeongChang 2018, that's a 44 percent increase in women participating this year.

More participation from Paralympians across the board is vital to fight against inequality, according to one Paralympic swimmer, Liz Johnson, who spoke of the ordeal with The Stylist in 2017. "The biggest inequality you face is actually about your impairment. People tend not to see you as male or female — they just see you as a para-athlete," Johnson said.

"We all come up against the barriers of being a disabled person," she added. "However, what’s great these days is that people are being held to account on social media. Calling out discrimination is vital – and the more we do it, the more people will start changing their behavior ... With more visibility and opportunities, we’ll reach equal ground in a shorter amount of time."

Sports-wise, the Paralympics will feature biathlon — a combination sport involving skiing and rifle shooting. Then there's cross-country skiing, ice hockey, and snowboarding; the sixth game is wheelchair curling. For ice hockey, Paralympic athletes will compete in the Gangneung Hockey Centre.

At least 133 medals for the Paralympic games will be awarded in PyeongChang, South Korea. The Winter Paralympic Games organizer Lee Hee-beom spoke of the medals as an equalizing symbol in a statement: "The Paralympic Winter Games medals for PyeongChang 2018 are a symbol of equality, creativity, culture and passion. The work that has gone into the design and manufacturing of the medals has been world class, and we are all looking forward to the moment when the first medal will be awarded to the world's best Paralympic athletes next year."

The Winter Paralympic Games' torch relay, titled as "Let Everyone Shine," will begin on Mar. 2 and end on Mar. 9. At least 800 torchbearers will be involved in the event, according to the official Paralympic Games' website. The distance for the relay is estimated to be 2018 kilometers.

For its emblem, the Winter Paralympic Games feature two star-like figures connected to each other. Both carry different colors, including black, yellow, red, blue, and green. The official website explains this aesthetic choice and says, "The emblem symbolises a world open to everyone. It combines the image of ice and snow, winter sports stars (athletes), and people from all over the world, coming together in PyeongChang where heaven meets earth."

Perhaps the cutest thing about the Paralympic Winter Games is its adorable-looking mascot. Known as "Bandabi," the games' mascot is an Asiatic black bear who symbolizes resilience and courage, and is from the Gangwon Province of South Korea. The mascot has a small white crescent moon on its chest and wears a multi-colored winter hat. You'll spot it soon in March.