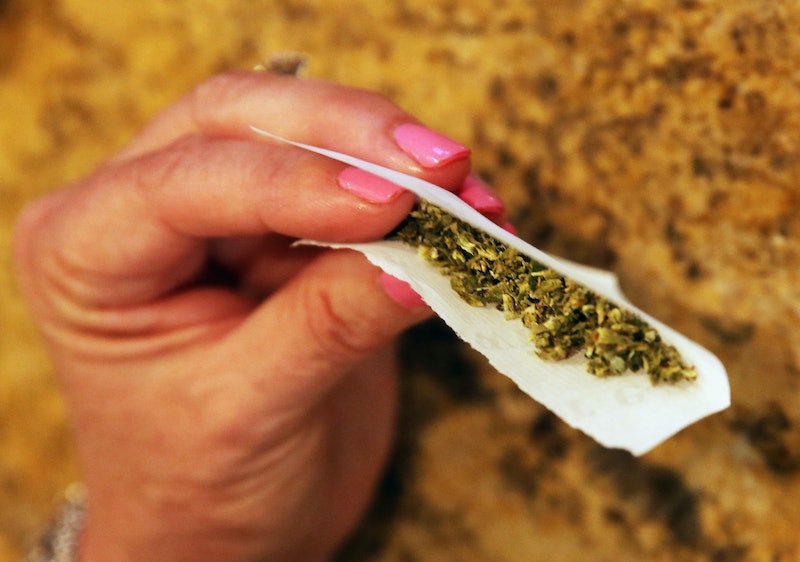 The push to make recreational marijuana use legal across the entire United States is still gaining steam, but one more state has just added its name to the list of places where people can smoke pot for fun. Recreational weed is now legal in Illinois, which has become the 11th state to take this step.

Illinois Gov. J.B. Pritzker held a Tuesday morning signing ceremony for the bill to legalize recreational pot usage, according to the Chicago Sun-Times. Under the terms of the new law, Illinois residents will be able to buy and possess up to one ounce (30 grams) of marijuana at any given time, and non-resident visitors will be able to buy up to 15 grams, per the Sun-Times. For those enrolled in the medical marijuana program that already exists in Illinois, it will also be legal to have up to five marijuana plants for personal use, the Sun-Times wrote.

Making recreational marijuana legal in Illinois was an important part of Pritzker's campaign platform, according to ABC News.

"There is an abundance of evidence that shows we can legalize marijuana in a safe way. It would have real benefits for Illinois, including reducing opioid overdoses and bringing in much needed revenue from taxation," the page dealing with marijuana legalization on Pritzker's campaign website reads. "Most importantly, legalizing marijuana is a step forward in reforming our broken criminal justice system. Criminalizing marijuana hasn’t made our communities safer. What it has done is disproportionately impact black and brown communities."

Shortly after he was elected, Pritzker said that he would begin working on legalizing recreational marijuana right away, according to Fox 32. Along with that effort, Pritzker also told the news outlet that he would work to vacate the arrest records of those who had been arrested over a marijuana-related crime.

“I definitely want to look at all those arrest records," Pritzker told Fox 32 in November. "If we’re going to legalize recreational marijuana, then we shouldn’t have all the, what I think are, challenges in our criminal justice system, you know, still existing, people sitting in prison for things that are currently legal."

Once the bill reached the Illinois legislature earlier in June, it passed with significant support, and marijuana for recreational use will officially go on sale in the state on Jan. 1, 2020, according to USA Today. Pritzker estimated that high taxes on the product would give his state $170 million in additional tax revenue in 2020 alone, and 770,000 residents of Illinois could see their marijuana convictions vacated.

There will be strict regulations on where and when people will be able to smoke pot, according to CBS Chicago. Law enforcement is also only beginning to address the problem of how to test drivers for recent marijuana use, because current tests can only determine if someone has used the drug within the last 28 days, CBS Chicago wrote.

This question is just one part of the legalization process, though, and as Illinois is still a fairly early state to legalize it for recreational use, it's natural that it wouldn't be entirely settled. USA Today wrote that the next states to legalize recreational pot probably won't be able to do so until referendums in the 2020 election, but for now, Illinois is proof that momentum is still growing.

More like this
6 Organizations Fighting Police Brutality That You Can Support Right Now
By Syeda Khaula Saad and JR Thorpe
Watch Jacinda Arden’s Devastatingly Honest Resignation Speech
By Sam Ramsden
What The UK Blocking Scotland’s Gender Recognition Bill Means
By Sam Ramsden
What Is Pamela Anderson’s Net Worth? She Was Never Paid For Her Stolen Sex Tape
By Hugh McIntyre
Get Even More From Bustle — Sign Up For The Newsletter
From hair trends to relationship advice, our daily newsletter has everything you need to sound like a person who’s on TikTok, even if you aren’t.