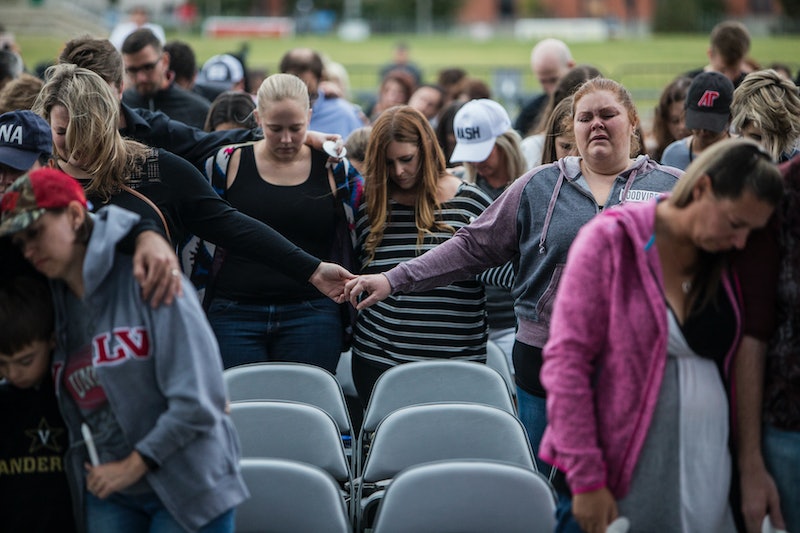 The nation is still reeling from the horrific Sunday night shooting in Las Vegas, but Americans have already fallen into predictable rhetorical patterns after this latest public attack. Conservatives have accused liberals of politicizing the shooting, but the need for a public discourse on gun control exists in this very moment, not later. Now is the right time to talk about gun control, because every second the clock counts down to the next mass shooting.

Conservative pundits went off about the supposed insensitivity of liberals who called for gun reform in the aftermath of the Las Vegas shooting on Sunday. Tucker Carlson spent a portion of his show criticizing Hillary Clinton for making the shooting "political." Sean Hannity went even further, accusing the entire American left of not caring about the people who were affected by the shooting.

“Bodies weren’t even in the morgue yet,” Hannity said during his Monday night broadcast. “Parents were in hospitals with their kids who are hanging on to life. None of this mattered to the left in this country.”

Even the White House dismissed talk of gun control on Monday as inappropriate. When asked about the issue in the wake of the Vegas shooting, press secretary Sarah Huckabee Sanders told reporters, "there will certainly be a time for that policy discussion to take place, but that’s not the place that we’re in at this moment."

Admittedly, jumping straight to the political discourse is not the most empathetic response to a mass shooting. In a vacuum, it is insensitive to focus on policy right after a mass tragedy like this. But the nation has felt this pain so many times that it would be ludicrous to keep reacting like it was the first time every time. People can't be as devastated and upset as they were over Columbine in 1999 or Virginia Tech a decade ago, simply because these shootings have become so common that they have lost some of their shock value. Plus, because the GOP has proven immovable on this issue, it's even easier for the public to skip straight to the blame game.

Republicans keep asking the nation to go through this tragedy over and over again by refusing to enact more protective gun laws. Following the Sandy Hook massacre in which 20 children died, zero gun control legislation was passed, not even a temporary ban on assault weapons or high-capacity magazines. After the Pulse shooting in Orlando, Congressional Republicans refused to even restrict the right to buy a gun for people on the federal no-fly list. In the wake of the Last Vegas shooting, no federal Republican legislators have stepped up to offer a solution or new forward thinking on the issue.

Reminding people of the GOP's choice to do nothing isn't a political cop out for dealing with a tragedy, it's the definition of accountability. News cycles and the average American's attention span are too short to keep the public up to date on how the nation reached the reality that it's living in today. That's why the country needs alternative voices on social media, challenging the narratives about these shootings proffered by the Republican establishment.

This country is just moments away from the next tragedy — there was only a little over a year between the Orlando and Las Vegas shootings. And thanks to the bevy of other problems facing the nation, plus, you know, the normal life that people are supposed to get to live while not doing their politicians' jobs for them, Americans will move on from this issue relatively soon. The nation needs to have a real discussion about gun control solutions now while people are focused and motivated to enact change. Otherwise, everyone will be caught off-guard when the next mass shooting happens, just like they were on Sunday.

An ancient Jewish scholar asked people more than 2000 years ago to consider two profound questions: "If not you, then who? If not now, then when?" How many more Americans will have to die before the country can have an honest discussion about guns? Until that happens, it's everyone's responsibility to keep up the momentum of that dialogue and the pressure on lawmakers to take action.