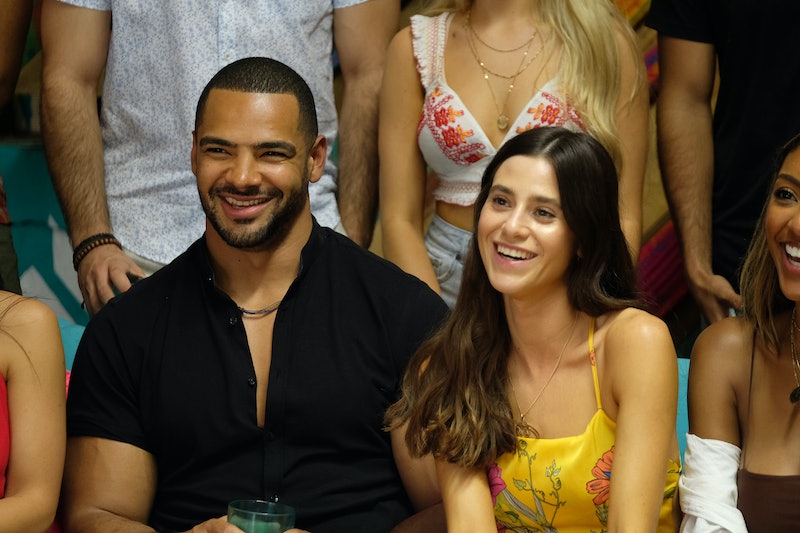 Bachelor Nation, take note — just because you don't find love on your season of The Bachelor, The Bachelorette, or even Bachelor In Paradise doesn't mean going on the show was all for naught. Often, previous stars meet and connect IRL, as was the case with Clay Harbor and Angela Amezcua. However, their relationship unfolded entirely offscreen, so if you weren't keeping up, you may be curious when Angela and Clay broke up. Clay is about to be on Season 6 of Bachelor In Paradise, so let's make sure this isn't a rebound situation.

Angela was on Nick Viall's season of The Bachelor, but she went home on the very first night, so if you don't remember her, don't worry. Luckily, she got a second chance on Bachelor in Paradise, but after a few short weeks, ultimately left Mexico still single. Clay, a pro NFL player, was on Becca's season of The Bachelorette but went home during Week 3 because of a football injury. Yes, really — a fun game of football sent this real football player home because he had to get surgery on his wrist in order to save his career. It worked out for both of them, though, because according to People, Chris Randone (aka the Goose from Becca's season) introduced Angela and Clay and sparks flew.

This was post-Paradise, sometime around Labor Day 2018. That whole fall and winter was filled with Instagram photos of Angela and Clay hanging around his Chicago hometown, frolicking in Los Angeles, and just being two generally very attractive people together in love. But sometime in the spring, the Instagram pictures stopped coming, and in April 2019, Us Weekly reported that Angela and Clay — Clangela, if you will — were no more.

While there's no exact way of knowing why Angela and Clay broke up, some of it could have had to do with the distance between them. Clay lives in Chicago, and, as Angela told Ashley Iaconetti and Ben Higgins on their Almost Famous podcast, she lives in the south.

"I'm still in South Carolina, but before Paradise, I was maybe going to move to Nashville, and that's still kind of the plan. But I don't know," Angela said.

Later, Angela said that Clay was a free agent and that she could follow him to whatever city his new NFL team is in. "I feel like timing is always very important in a relationship, and I feel like the timing is right for us right now," she said.

Well, uh, maybe not? But honestly, with their living situation so up in the air, it's not hard to see how a relationship could fizzle out — especially considering they'd never, ever lived in the same city and didn't know how their relationship would function on a more everyday basis.

It's a bummer that these two split up, but sometimes, that's just what happens. Clay has a chance on finding love on Bachelor in Paradise, Angela is doing her own thing, and maybe someday it will all come together again.