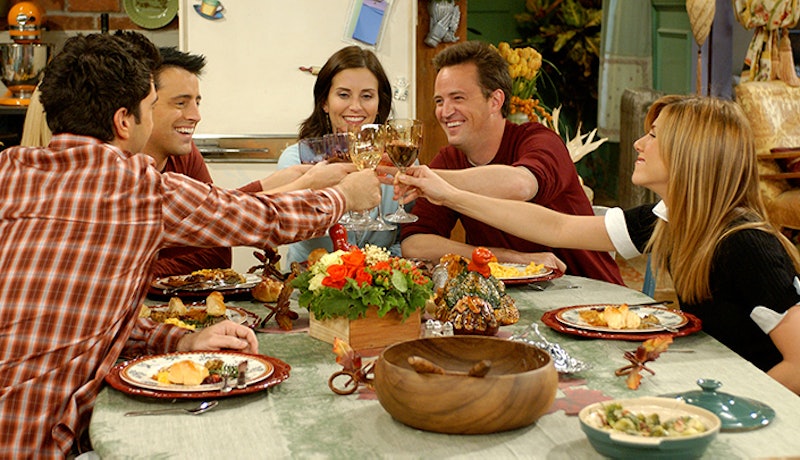 While friends have been gathering to celebrate Thanksgiving together as long as the holiday has existed, at some point the term Friendsgiving was officially coined. So, just when did Friendsgiving start outpacing the traditional Thanksgiving dinner for groups of friends? The Friendsgiving holiday started picking up steam at about the same time the economy took a nose dive into the toilet in 2008, according to a tongue-in-cheek article McSweeney's that's also pretty on point.

As the story goes, millennials graduated college and moved to big cities with hopes and dreams of successful careers, swanky loft apartments, and an overall fabulous life. What actually happened was a lot of side hustling to make ends meet while millennials got rejected from the real jobs they had taken out tens of thousands of dollars in student loans to train for, cramped quarters with terrible roommates, regular dinners of ramen noodles, and wallets so empty that no one could afford a plane ticket home to celebrate Thanksgiving with their families.

Well my friendlies, necessity is the mother of invention. And, seriously, why should all of the stranded urban nomads eat ramen noodles alone? After all, Monica, Rachel, Phoebe, Chandler, Joey, and Ross had been celebrating Friendsgiving for years.

The Evolution Of Friendsgiving

The cast of Friends showed everyone that just because your poor AF making your living waiting tables while wearing roller skates, that doesn't mean you can't vie for an ugly troll-doll trophy during a game of flag football, or throw an uncooked turkey on your head while feasting on four kinds of potatoes, and a dessert that's part shepherd's pie and part fruit trifle. And, don't forget to make the "mocholate" dessert, which is almost as terrible as the meat-fruit thingy, and can also kill you.

After the inaugural 2008 Friendsgiving, the food-with-friends trend started picking up speed, and the term Friendsgiving was entered into the Urban Dictionary making it a bonafide holiday. Since moving away from my hometown in Ohio more than a decade ago, I have celebrated many a Friendsgiving holiday with varying levels of success.

Highlights include being held hostage by an extremely mean host whom we all decided not to be friends with after she threw out guests she didn't like (these castaways had to wander the streets looking for an open bar so they could cry in their beers while eating cheese fries), insulted every single dish brought by guests, and refused to let us open more than one bottle of wine. Seriously, we barely escaped with our lives. It was almost as epic as the insides of the turkey getting dumped on someone's head like in my favorite Thanksgiving movie, Home for the Holidays.

While not technically a Friendsgiving celebration, Home for the Holidays does include a super cute friend brought by Robert Downey Jr.'s character in hopes of fixing him up with his sister, played by Holly Hunter. There's also an out-of-touch-with-reality aunt who makes necklaces out of Fruit Loops and gives people lamps from her house every time they stop by, a dad who can't stop washing cars, and a game of touch football that goes terribly awry. Seriously, rent this movie for your Friendsgiving 2017 post-dinner food coma.

Friendsgiving is meant to be fun, and is supposed to eliminate all of the things you don't miss about having Thanksgiving with your family — like your aunt giving your necklaces made out of cereal. However, some people wrote on Urban Dictionary that some of these family Thanksgiving ordeals are creeping into Friendsgiving celebrations, which is what always happens when friends become family and get comfortable enough with one another to reveal their true selves.

"Friendsgiving: the day of the year you want to be thankful for your wonderful friends but end up getting frustrated with them all instead because no one gives a turd about your plans or what part of the day you are looking forward [to]," Josh Kawlie wrote on Urban Dictionary. For example, "Mariah made a Friendsgiving event but none of us want to hike so we are all going to bail on her for that part of the day even though she was most excited for it."

Friendsgiving Is The Most Memorable Holiday

Like the Thanksgivings you grew up with, Friendsgiving will quickly create memories that you'll laugh about for years to come, and genuinely miss once the tradition fades away.

From epic doughnut-salad desserts that double as appetizers, to undercooked birds, to competitive games of charades, Friendsgiving will be the holiday you miss the most when everyone finally becomes a real grown up (I'm still waiting for that to happen to me), and no longer has time to come over to eat turducken or tofurkey while lamenting on how real life is nothing like they imagined it would be.

While it might feel like this whole adulting thing is akin to trying to lift an object off the ground using only your mind, it's important to realize how special and rare a tradition like an epic Friendsgiving celebration is while it's happening. Seriously, while that whole being-held-hostage-without-wine Friendsgiving was awful in the moment, it's also the Friendsgiving I look back on most fondly.

Because, whether you're giving thanks with family or friends, that kind of wonderful and terrible stuff can only happen on a holiday. Happy Friendsgiving 2017!

More like this
23 Super Sweet Things To Write In A Valentine's Day Card
By Karen Belz and Lexi Inks
21 Galentine’s Day Memes To Celebrate Your Best Friends
By Meghan Bassett and Mia Mercado
Dunkin’s Valentine’s Day Lineup Includes A Drink That Tastes Like Dessert
By Alexis Morillo
15 Black-Owned Liquor & Wine Brands To Add To Your Bar Cart
By Alexis Morillo
Get Even More From Bustle — Sign Up For The Newsletter
From hair trends to relationship advice, our daily newsletter has everything you need to sound like a person who’s on TikTok, even if you aren’t.