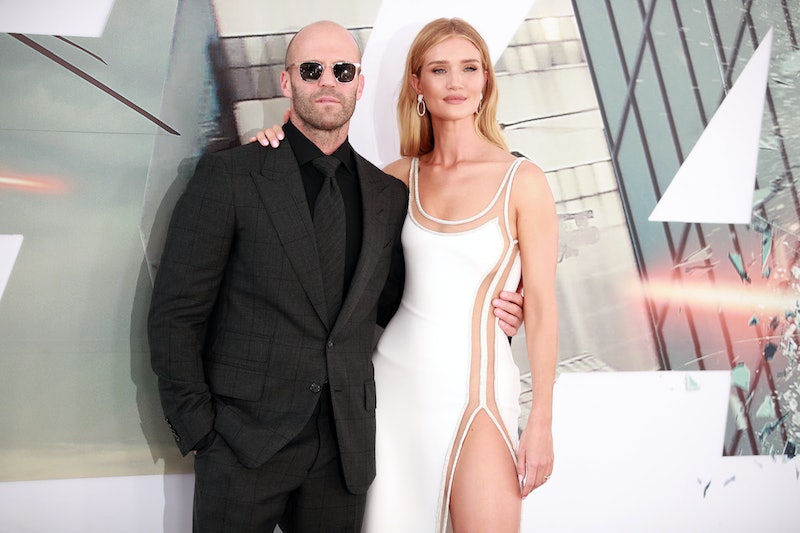 They've been engaged for more than three years now, and even share a child together. Their relationship looked stronger than ever at the recent premiere of Hobbes & Shaw, and actually — it's kind of hard to remember a time when they weren't a couple. So, when did Jason Statham and Rosie Huntington-Whiteley start dating, you wonder? In a nutshell: Forever ago, basically.

According to The Knot, Statham and Huntington-Whiteley first met and fell in love while filming Transformers back in 2010. Yes, you read that correctly: 2010. That means they've been together for nearly a decade now. Told you they started dating forever ago.

Over the next couple of years, they continued to look all kinds of loved-up while on vacations, red carpet events, and various award shows. During an interview with Elle UK in September 2012, though, Huntington-Whiteley seemingly insinuated that she might be ready to settle down sometime soon.

"I always see myself working, but definitely being a mum will be a big part of me," she told the outlet. "Look, I think my career is very self-indulgent. It's all about me ... So it is very self-involved." The model and actor then added, "I think there is naturally a point where you think, 'I don't care about myself as No. 1 anymore. I want to care about other things.'"

Despite her suggestion, it'd end up being a little while longer before Huntington-Whiteley actually reached that point. In the interim, though, she and Statham were consistently one of the most in-love looking couples in Hollywood. No matter where they went, they only had eyes for each other and were pretty much attached at the hip.

Flash-forward to April 2015, when Huntington-Whiteley sat down with Self, and seemingly foreshadowed the eventual future of her and Statham's relationship. "For any couple that’s been together for a certain amount of time, there’s a massive amount of pressure to get married," she told the outlet. "I totally believe in marriage, but being in a happy relationship is much more important to me… [Kids are] something that’s more realistic in the near future."

Statham would end up proposing to Huntington-Whiteley around January 2016, but the pair did, in fact, end up having a baby before walking down the aisle — just like the model predicted during her interview with Self. Jack Oscar was born in June 2017, which Huntington-Whiteley announced via an Instagram post at the time. "Our little man arrived!" she captioned a sweet pic of Jack holding onto her hand. "Jack Oscar Statham 8.8lbs on Saturday June 24th."

Even though they've been engaged for more than three years now, Statham and Huntington-Whiteley still don't seem to be in a rush to actually get hitched. "I think the time will come," the model told Extra in October 2018. "We’ve been so focused on our work for so long, and Jack came along. We definitely talk about it, we’re looking forward to that time, it’s also not a huge priority for us, we’re so happy." She then added, "I think it will be fun to do it when the baby’s grown up a bit and he can be involved in the wedding."

Sounds like a pretty reasonable plan, right? Regardless of if and when they end up tying the knot, it's crystal clear that they couldn't be more content with the way things are right now.