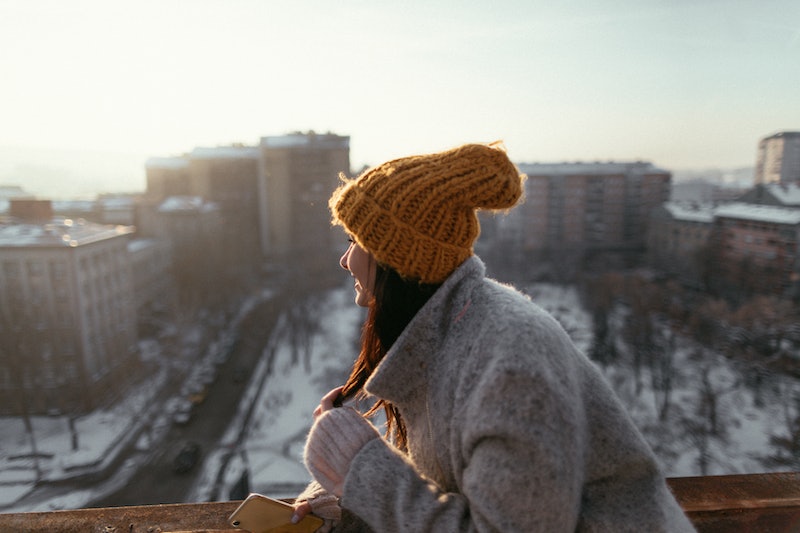 November may mark the start of the holiday season, but it also means the sun begins to rise later in the morning and set even earlier in the evening, when most people are just leaving for work or eating dinner. Though this time of year is about all things merry, a lot of folks miss the sunshine during the winter months — and some may even experience seasonal depression as a result. If you're all about sunny and summer weather, the darkest day of the year, surprisingly, may actually bring you some comfort: The winter solstice actually means the sun is on its way back, and the days will officially start getting longer once it passes.

Considered the first day of winter, the winter solstice is the day of the calendar year with the fewest hours of sunlight, according to Scientific American. "For people in the Northern Hemisphere, the winter solstice usually falls on Dec. 21, and occasionally Dec 22., depending on your timezone," Michael Bueno, a graduate student in Northwestern University's Astronomy PhD Program, tells Bustle. "It is the point at which the Northern Hemisphere is tilted farthest away from the sun" during Earth’s annual orbit around the star.

Genevieve Schroeder, another graduate student enrolled in Northwestern University's Astronomy PhD Program, says that there's a "common misconception that during the winter solstice the earth is farthest from the sun in its orbit." However, she explains Earth is actually closest to the sun in early January, but the Northern Hemisphere is tipped away from the sun, hence, the shorter days.

Countries and continents in the Southern Hemisphere experience their winter solstice on Jun. 21 or Jun. 22 — which is the summer solstice (aka, the longest day of the year) for people who reside in the Northern Hemisphere. Depending on where you live, the amount of sunlight you see during the winter solstice will vary. As the Washington Post reported, residents of Key West, FL, saw just over 10 hours of sunlight in 2016, while the city of Fairbanks, AK, experienced only 3 hours and 42 minutes of sun.

Not only is the December solstice an important astronomical event, but a cultural one, too. The winter solstice has been celebrated all over the world since ancient civilizations. As TIME reported in 2017, cultures and religions across the globe pay tribute to the darkest day of the year; you'll find thousands of visitors of all kinds singing, dancing, and celebrating the solstice at Stonehenge. Moreover, Pagans still commemorate the day with a holiday celebration called Yule.

Though many people celebrate the December solstice, these dark, wintery days can have a noticeably negative impact on mental health, and some people may be counting down the minutes (quite literally) until the sun is back in full swing. According to the Cleveland Clinic, half a million people in the U.S. have seasonal affective disorder (SAD) — a form of seasonal depression that’s typically triggered at the start of fall or winter by shorter days and cold weather. What's more, the medical center also reports an estimated 10 to 20% of people are believed to have a milder form of SAD. Dr. Brian Isaacson, the program director for the Department of Psychiatry at AtlantiCare Regional Medical Center, says that common symptoms of SAD include sadness, depression, changes in appetite and sleep, fatigue, feelings of worthlessness, and, in some cases, suicidal thoughts.

"SAD is believed to be due to a chemical imbalance that is associated with decreased sunlight, and is more prevalent in latitudes further from the equator. Neurotransmitters that are affected include serotonin and melatonin," Dr. Isaacson tells Bustle. If you have experience these seasonal mood changes during winter, he suggests trying to spend as much time outside in the sun as possible, or investing in a light therapy lamp if you have work obligations during the day. A 2016 study found that light therapy showed promise in alleviating SAD symptoms; however, it's important to note that a 2019 review concluded more research on light therapy needs to be conducted.

"For people who have significant SAD, they [may] need either cognitive behavioral therapy (CBT) or pharmacotherapy, with a medication such as a selective serotonin reuptake inhibitor (SSRIs)," Dr. Isaacson adds.

The darkest day of the calendar year ultimately is a good thing: Bueno says the winter solstice actually signifies that the months will gradually begin to get brighter. Though, as Australian-based astronomer Tanya Hill wrote in a 2017 article for The Conversation, you will first start to see a slow increase in later sunsets, and it will be even later before you start noticing earlier sunrises. Despite the sunnier weather you can look forward to following the winter solstice, Schroeder explains the temperature will continue to drop in January. "This is because the Earth is able to retain some of the heat it absorbed during the summer, [but] throughout the fall and winter, it slowly loses that heat it had captured," she says. "While the days are getting longer, the heat being absorbed from the sun in January is still less than the heat being lost, so it continues to get colder."

Whether or not you enjoy the dark, wintery days, consider keeping track of the ways the weather will be changing in the following weeks. It will continue to get darker a little while longer before the sun will be making more regular appearances anytime soon. If you’re someone who counts down the days to summer, know that the winter solstice means that sunnier days are on the horizon — even if the freezing temperatures linger for a few more months.

This article was originally published on Dec. 19, 2017