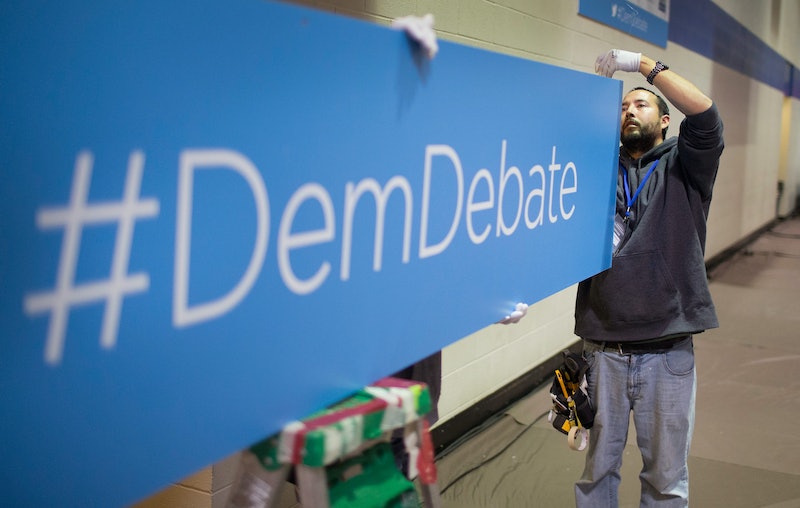 With the Democratic debates right around the corner, candidates vying for the presidency will have a chance to make — or break — their case, and you can bet the American people will be paying attention. Now, you may be wondering exactly when the Democratic debates end. If you're planning on tuning in, you might need to stay up later than usual.

According to NBC News, the first round of Democratic debates will take place on its news network on June 26 and June 27. Both debates follow the same schedule, the outlet reported, and will start at 9:00 p.m. EST and end at 11:00 p.m. EST. If you don't live on the East Coast, you may want to check what time the debate will start and end for you based on the region you're in.

Location-wise, the first Democratic debate will happen at The Adrienne Arsht Center for The Performing Arts in Miami, Florida, per NBC News. You can expect to see veteran television anchors and hosts such as Savannah Guthrie, Lester Holt, Chuck Todd, Rachel Maddow, and Jose Diaz-Balart. According to NBC News, Holt, Guthrie, and Diaz-Balart will moderate the first hour of the debate. Then, Todd, Maddow, and Holt will moderate the second hour.

While it is known that the second and third rounds of Democratic debates will be aired on CNN and ABC News' networks, respectively, it is not clear when those later debates will start and end. If you're interested in staying on top of the developments, you can keep an eye on Election Central's website, which offers updates on the timing, location, moderators, and live stream services for debates.

Format-wise, the first round of debates will feature 10 candidates on each night, according to The Hill. As you might imagine, splitting the debates up into two nights could help them flow more smoothly and give each candidate more time to share their opinions.

To be clear, there are 24 Democratic presidential hopefuls in total but not all will participate in these debates. According to The Intelligencer, the Democratic National Committee (DNC) has specific guidelines for who can and cannot qualify for a spot in the debates.

One criterion goes like this: if a candidate wants to be in a Democratic debate, he or she needs to have at least 1% support in national or state-level polls. This level of support needs to be publicly shown between Jan 1, 2019 and two weeks before the official debate takes place. According to Politico, the final date for qualifying was June 12.

Another way to qualify for a debate, per the DNC, is by demonstrating the candidate's campaign "received donations from at least (1) 65,000 unique donors; and (2) a minimum of 200 unique donors per state in at least 20 U.S. states."

With this criteria in mind, FiveThirtyEight reported that at least 20 Democratic presidential candidates have made the cut so far. If you're interested in seeing those candidates speak in the first round of Democratic debates, you can watch a live stream on NBC News on June 26 and 27.