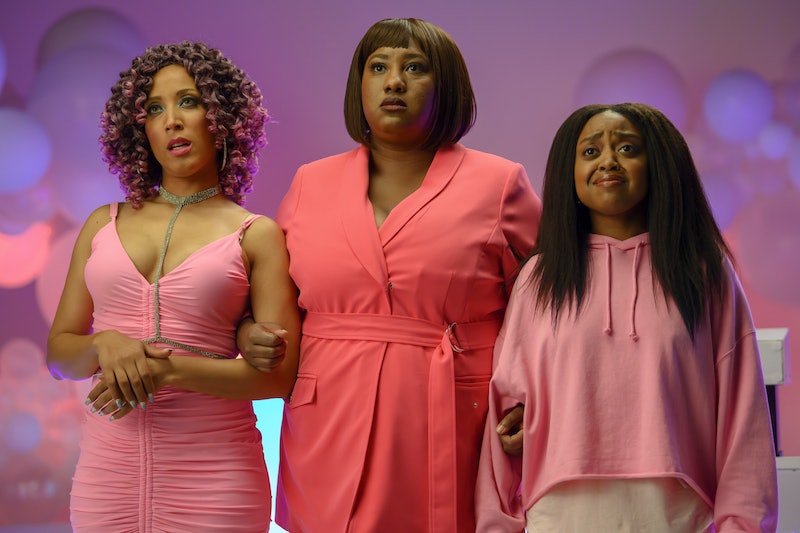 “It’s been thrilling to see the audience embrace the characters that Robin, Ashley, Gabrielle and Quinta have brought to life,” said Gravitt, per Variety. “We had a blast making this groundbreaking sketch show with Robin, Dime and all of the writers and producers, and I can’t wait to see what next season holds.”

Season 1 aired in August and September of this year. Given the popularity of the series and the short length of the season, it's possible that Season 2 may air in the Spring of 2020 — but sometimes networks don't want to fix what isn't broken, so Season 2 could do the same and premiere next August.

A Black Lady Sketch Show was co-created by Insecure's Issa Rae and Robin Thede, who was head writer for The Nightly Show With Larry Wilmore before hosting her own late night show on BET. Their staff writers and regular performers are seriously funny women women with work of their own. While you wait for A Black Lady Sketch Show Season 2, check out these deep cuts and viral faves from the cast and crew.

It's hard to pick a favorite Amer Ruffin video. Her Late Night segments "Amber Says What," "Jokes Seth Can't Tell" with Jenny Hagel, "Amber's Minute Of Fury," as well as one-offs in which she sings songs about racist micro-aggressions and apologizes like a sexual harasser prove that she's the true star of the show — sorry Seth! Ruffin also hosted the 2018 Writer's Guild Awards, and her opening monologue is not to be missed.

Thanks to Nailed It, Nicole Byer is a household name — but she's been doing sketch and improv comedy for years. The UCB sketch "Be Blacker" that she starred in went viral in 2013. Today, her sketch shows include Loosely Exactly Nicole, Girl Code, and Party Over Here. In addition to that, she hosts a podcast called Why Won't You Date Me on Headgum. Above, please revisit her inspiredly bonkers appearance covering the MTV Movie Awards red carpet.

Brunson is a Streamy nominee and had her own Buzzfeed productions series, but check this out first!

The Rundown With Robin Thede

This is Thede's afore-mentioned talk show, that had a sketch element as well.

Long before playing Candice on Insecure, Gabrielle had a comedy career doing stand-up and improv. She's returning to those roots!

Hopefully, Dennis and Rae's other Insecure costar Natasha Rothwell — who has her own episode of Netflix's sketch series The Characters to her name — can return for more than just one episode in Season 2.

Thede and Rae have assembled some incredible talent for A Black Lady Sketch Show. Thank goodness they get to do it all over again, and the show will be back before we know it.