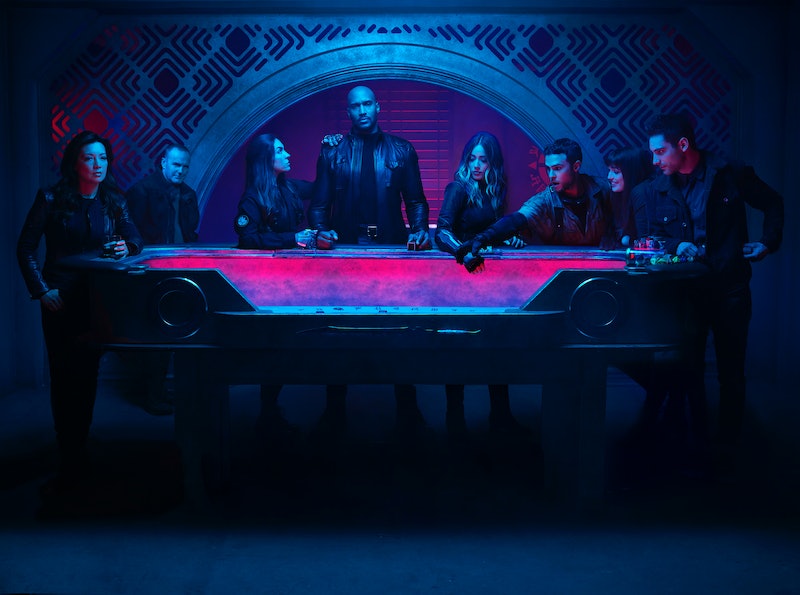 Per The Wrap, you can expect the show to close its final chapter in summer 2020 — which is tragically a long, long way away, but will at least give fans enough time to prepare. "When you know that's what you're doing, you can take greater risks, of life and death," said the head of Marvel Television Jeph Loeb, also according to Deadline. "Those kinds of decisions suddenly now are real on the table because you're not playing how do we undo this when we get to the next season. You're playing that this is going to be the end of the story."

And if you weren't emotional enough already, shooting on the final season is already complete! The cast and crew took to Instagram and Twitter to share emotions and memories.

By now, Marvel fans are used to saying goodbye to their favorite characters. No, that's not a jab at anything that happened in Avengers: Endgame before or after the snap heard 'round the galaxy. With the announcement of Disney's streaming service Disney+ and new MCU series joining that platform, pretty much all of the O.G. shows are coming to an end. Netflix's Defenders properties (Luke Cage, Jessica Jones, Daredevil, The Punisher, and Iron Fist) have all aired their series finales, and though Hulu's Runaways and Freeform's Cloak and Dagger are still going strong, don't get fans started on Agent Carter.

Speaking of Disney+, it's entirely possible that some S.H.I.E.L.D. characters could end up making cameos in a future show or movie now. It's unlikely that Disney+ will revive the series entirely, but characters could "return" in the Marvel fashion for new team-ups and adventures — especially as ABC is already under the Disney umbrella and has the rights to the characters. S.H.I.E.L.D often included faves like Sif, Nick Fury, and Maria Hill. Maybe Quake can become an Avenger now! It would also be amazing for comic book fans if Bobbi Morse, aka Mockingbird, showed up on the Hawkeye series... but to explain why would be a spoiler.

For now, we have the final season of Agents of S.H.I.E.L.D. to look forward to — how the heck are they going to wrap everything up and address the events of Endgame in just 13 episodes?!

"The bitter side is nobody ever wants anything to end," Loeb told Deadline, but the good news is that "you've seen none of Season 7. That's the celebration, there's still more. It's not as though we're going to walk off the stage and say goodbye, you're never going to see another one of these new stories again. You have to see how this ends, you have to."

So save your spy's goodbye for next summer. There's still more to come.

More like this
The Star Of 'Ms. Marvel' Has A Legendary Letterboxd
By Gretchen Smail
Noah Schnapp Is Setting Up Doja Cat With 'Stranger Things' Co-Star Joseph Quinn
By Jake Viswanath
Ritu Arya Bustle Booth
By Gretchen Smail
The Bachelorette’s Erich Is Trying To Bring Back The Mullet
By Brad Witter
Get Even More From Bustle — Sign Up For The Newsletter