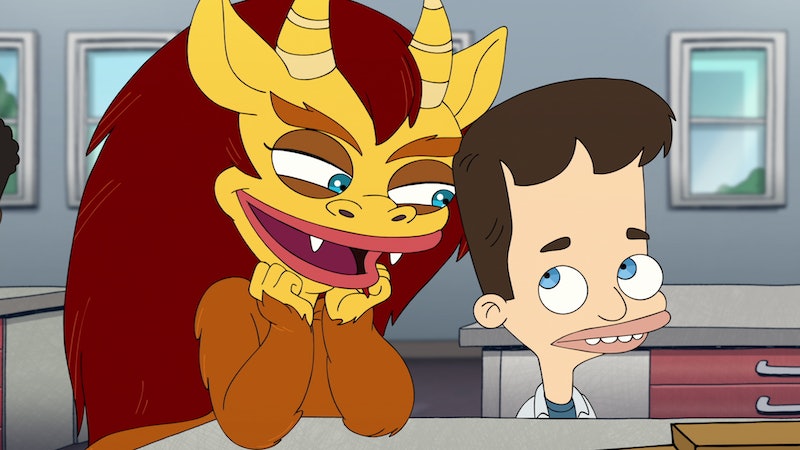 Netflix released Season 3 of Nick Kroll and John Mulaney's side-splitting animated comedy on Oct. 4, and thankfully, the laughs don't have to end there. Big Mouth was already renewed for Season 4 along with two more seasons, according to Netflix, so Andrew, Nick, Jessi, Jay, and Missy's stories can carry on throughout high school. Unfortunately, exact release dates for each season aren't available yet, but considering that Seasons 1, 2, and 3 hit the streaming platform during the fall television premiere season, it's fair to expect the final three to follow suit. Season 4 will likely premiere sometime in late September or early October.

“Big Mouth brilliantly captures the most awkward phase in a person’s life, puberty, in a hilarious yet heartwarming way,” Mike Moon, head of adult animation for Netflix, said in a statement, per Vulture. “We couldn’t be more excited to continue our relationship with Brutus Pink and bring more stories, more humor, and more hormones to Netflix members around the world.”

Brutus Pink, the official animation production company formed by the Big Mouth creative team also made a statement regarding the exciting news. "Netflix has given us the best creative experience imaginable, and we’ve been able to build an amazing community of talented writers, actors, producers and artists," the team reported, per Den of Geek. "We’re thrilled to be continuing with everyone for years to come.”

Kroll joined the batch of announcements by sharing a video on his personal Twitter page. In it, he confirmed that Big Mouth is getting three more seasons, and in doing so, he sampled a few of the many characters he voices on the show: Maurice the Hormone Monster, Coach Steve, and one of the show's two main middle schoolers, Nick Birch. Kroll also provides the voices for various other, more minor characters throughout the series. Jessi Klein, Jason Mantzoukas, Jenny Slate, Fred Armisen, Maya Rudolph, Jordan Peele, Andrew Rannells, Paula Pell, June Diane Raphael, and Gina Rodriguez lend their voices to the show as well.

Despite its timeless premise, Big Mouth relies on relevancy for some punchlines, which can be tough for a show that's been renewed so far in advance of another season's premiere date. Kroll talked to New York Magazine about this ahead of Season 2 saying, "We had written and voiced the majority of Season 2 before the show came out, which was in a way a blessing because we got to make a show in our bubble. When the show came out and people responded to what they responded to, we felt pretty good."

He added, "The stuff that people liked was the stuff that we liked, too, and we have continued along that line. What we couldn’t have foreseen was the #MeToo movement. Though even before that — before Trump’s election — you could feel there was a general feeling that there were some seismic shifts that were starting to unfold. It hadn’t exploded yet when we wrote the second season, so there were certain things that we then went through to see if it still tracks. Or we leaned into it in certain places."

With three more seasons ahead of them, there will be more than enough timely topics to tackle — in addition to keeping the hormone monsters in line.