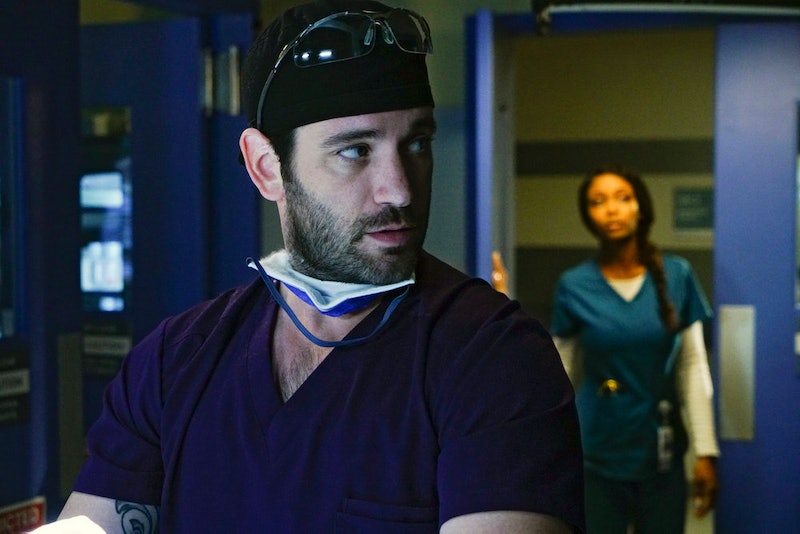 Chicago Med will say goodbye for the winter on Tuesday, Dec. 12, and from the looks of it, that'll happen with a bang. When will Chicago Med Season 3 return in 2018? In the below teaser for the midseason finale episode, Dr. Charles is yet again put in harm's way after a troubled patient appears to hit him with a defibrillator after an encounter with police goes wrong. This could be a cliffhanger situation for fans of the medical drama, who'll definitely want to know when the medical drama will be back on the air.

Audiences won't have to wait long for a resolution. The series will be back in less than a month, in fact. Chicago Med is slated to return to finish out its third season on Tuesday, Jan. 2 at 10 p.m. ET, according to Cinema Blend. And, according to The Hollywood Reporter, there will be plenty more to look forward to. The outlet reports that the show was picked up for a 20-episode season, and so far they'll only have burned through four of those at the time of the midseason finale. This will be welcome news to fans, who know that the show returned a little later for the start of this year's season than shows typically do — rather than premiere in September like it did last season, Chicago Med held off until nearly the end of November.

The late premiere date doesn't mean anything good or bad for the fate of the show — it just means the Chicago franchise, which also includes Chicago P.D. and Chicago Fire, had to keep its storylines succinct and in line with one another. "It took some logistical maneuvering because we have to be in sync chronologically with the other Chicago shows," co-showrunner Andrew Schneider told The Hollywood Reporter in the same piece. "We just had to adjust because we had originally planned that our first show was going to pick up immediately after the final episode," co-showrunner Diane Frolov, who also happens to be married to Schneider, also said. "We couldn’t do that having a later start."

The showrunners also hinted that any potential trauma that hits Dr. Charles — like the one teased for the midseason finale — would have lasting effects on the character, and the hospital at large, due to the gunshot he sustained in the Season 2 finale. "Anybody who is shot is going to suffer some form of PTSD and it also has a ripple effect to close ones. For Sarah, Charles is kind of a surrogate dad," Schneider said in the same interview. "Her own dad abandoned her when she was a little girl and Charles was the one who brought her into psychiatry and has kind of a fatherly relationship with her. For her, almost losing him is emotionally devastating."

From the sounds of it, Oliver Platt, who plays Dr. Charles on the show, isn't one to shy away from these kinds of traumatic storylines for his character. "It’s actually really fun to do that stuff," Platt said at a press event earlier this year, reported the Observer. "In this show, we don’t usually personally experience violence because we’re usually in the hospital taking care of the people who do. So, it’s kind of fun from a technical level to take the hit and roll over."

Any kind of opportunity to explore the lasting effects of Charles' shooting seems to be one that the show wants to take. "[The shooting] has an emotional impact on everyone," Schneider told TV Guide. "Both in terms of almost losing this beloved figure and how do you improve security in the hospital? Where do you draw those lines to protect staff?" That certainly seems to be a question that the hospital staff will continue to wrestle with as the season goes on, especially as more violent or unruly patients enter the doors of Gaffney Chicago Medical Center. Luckily for viewers, they won't have to wait long to see those events unfold.