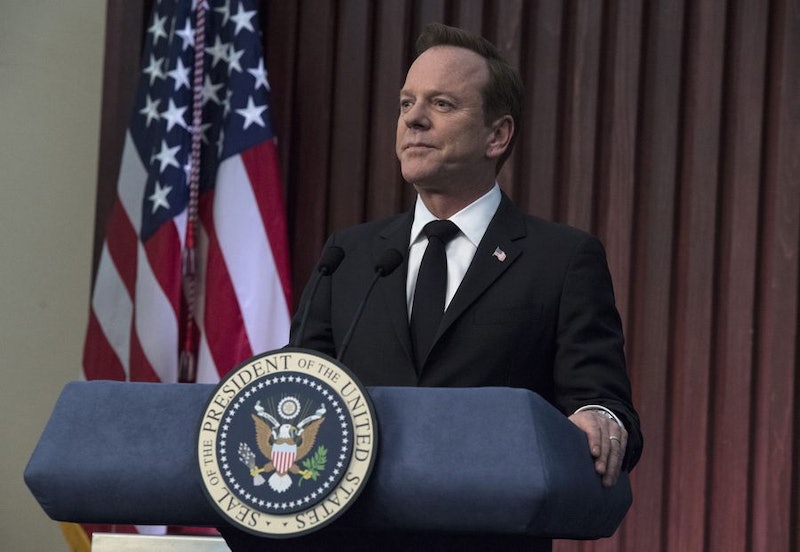 No man is more experienced at rescuing a troubled America than, of course, original 24 star and Canadian action hero Kiefer Sutherland, which is why ABC's Designated Survivor has had such an entertaining first season. And since it's coming up on the end of its first season, it's time to think about whether Designated Survivor will return. Well, I have some good news: Designated Survivor was renewed for Season 2 just days before its Season 1 finale. So there's no reason to be nervous that when the end of the season cliffhangers roll around, that you won't get to know the answer. Unfortunately, though, that doesn't mean that Designated Survivor Season 2 will be arriving soon. The series will likely premiere in September 2017 — it should once again be a fall premiere, and if its time slot doesn't change from Wednesday nights, there shouldn't be anything to delay the next premiere.

UPDATE: ABC announced on July 25 that Designated Survivor will return on Sept. 27.

EARLIER: But once Designated Survivor does go off the air, what can fans expect from the upcoming second season? Obviously, knowing more won't make the summer-long hiatus any shorter, but maybe it will be more bearable having some idea about where the series is going. And it may be heading in a slightly different direction, because in the second season, Designated Survivor will have a new showrunner — for the fourth time in its short history, the show is changing hands. According to Deadline, Keith Eisner, formerly of The Good Wife, is taking over. According to Cinemablend, "creative differences" were allegedly behind some of the past showrunner changes, and Suthterland's creative influence may have impacted the series, including orchestrating his reunion with former 24 bad guy and Designated Survivor confidante Mykelti Williamson.

But even a new showrunner won't totally change the ongoing story of Designated Survivor. All season long, a conspiracy has been mounting: Who is behind the massive attack that took out the highest elected officials in the United States, making the lowly Secretary of Housing and Urban Development the President? Agent Wells has been the stealth hero of the series, investigating the attack and suspecting from the beginning that there could be another, subsequent one. Turns out, she was right, now she's been kidnapped by the conspirators, there's a traitor in the White House, and everything that Kirkman attempts winds up getting blocked by either normal political gridlock or some other aspect on the ongoing conspiracy.

Personally, I'm slightly nervous that Wells could be the first season's last casualty, but it seems possible that someone else who lives in the White House could be the next target because of the mole — maybe even Kirkman's family. Certainly, Designated Survivor is basically nothing like the real world or real politics. So, since the series takes such liberties with political institutions, it's leading its upcoming second season in a very exciting new direction.