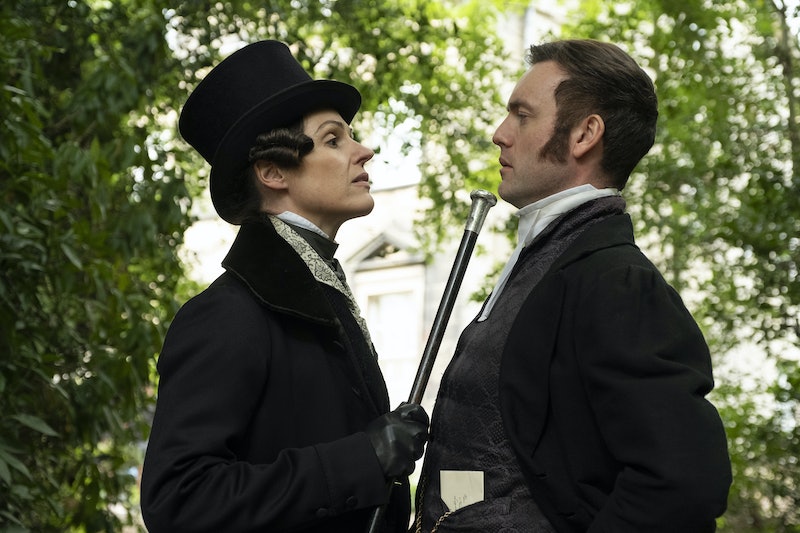 HBO's Gentleman Jack airs its Season 1 finale on Monday night, and fans of the show will be relieved to know that yes, Gentleman Jack will return for Season 2. According to Deadline, it was the BBC's most-watched new drama, drawing 5.1 million average overnight viewers. And though the ratings for HBO, where it airs conjointly, are much lower, the period series' team believed in the story enough to give it more episodes.

As for when Season 2 might premiere? It could be a while. Based on timelines for popular shows like Luther, Call The Midwife, Happy Valley, Peaky Blinders, and Fleabag, BBC dramas can take anywhere from one to several years to return. That means that, at minimum, it will probably be spring 2020 before Gentleman Jack is back, and it could be even longer. As a historical series, research and factual accuracy are critical, and Anne Lister's diaries — upon which Gentleman Jack is based — were still being decoded during Season 1 production. "It was being decoded especially for us as we filmed, which was really exciting," Suranne Jones, who plays Lister in the show, told NPR. "We were getting pieces of information that had never been seen before."

Variety reported that Season 2, which will also be eight episodes, will continue to pull from Lister's diaries, so depending on how much has since been decoded, the writing team may need to wait for more information before beginning to craft Season 2. That being said, there is a lot to pull from, which bodes well for Gentleman Jack's future — however long it ends up taking.

"There's so much story in the journals," series creator Sally Wainwright told Collider ahead of the Season 1 premiere. "Even with eight episodes, we're still having to make quite painful choices about what not to include. I wish that we'd done 10 episodes. We've covered two years in those eight hours, and there's so much more we that we could've told."

Now, instead of two extra episodes, Wainwright will have eight. "It's so exciting that so many people have had such a positive response to Suranne [Jones'] exuberant performance as the brilliant, life-affirming Anne Lister and to Sophie [Rundle's] beautiful performance as her courageous partner, Ann Walker," Wainwright said in a statement given to Deadline. "I'm utterly delighted that we've been recommissioned, because there are so many more big, bold stories to tell about Anne Lister and Ann Walker."

According to the Radio Times, Season 1 covered 1832 to 1834 in Lister's life. But Lister didn't die until 1840, which gives the show six more years to explore in a second season, or even a third and fourth. And Jones can't wait to tackle more. "We always dreamed there would be more and now we get to play it all out," she said in a statement provided to Deadline. "I love working with the brilliant and talented Sophie Rundle and can't wait to create some more Lister and Walker moments with her too."