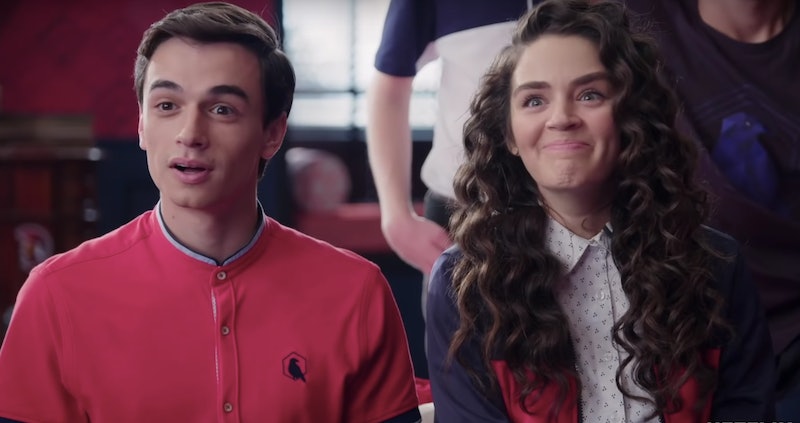 If you just finished marathoning Season 3 and can't wait for more, good news: Greenhouse Academy has already been renewed for Season 4. The news was pretty nonchalantly confirmed in July, when the show's official Twitter account posted a photo of the cast piled into a car. "Driving into seasons 3 & 4 like..." it read, followed by the hashtags #2MoreSeasons and #Netflix.

There hasn't been much mention of Season 4 since then, nor has Netflix made a more official announcement. Season 1 was released on Sept. 8, 2017, Season 2 dropped on Feb. 14, 2018, and Season 3 just came out on Oct. 25, so there's not really a concrete schedule that may suggest when fans can expect Season 4. However, the show has regularly returned every year, so it will likely be sometime in 2020.

On Greenhouse Academy's Instagram page, there's a highlight titled "S3&4 Sneak Peeks" full of behind-the-scenes clips from filming, many of which were taken by the cast. The most recent post was uploaded 45 weeks ago, the week of Dec. 10, 2018. It's a picture of lead actors Ariel Mortman and Chris O'Neal declaring filming has wrapped, but it doesn't specify which season.

If the cast and crew are being that vague and also grouping Seasons 3 and 4 together on social media, there's a good chance they were filmed at the same time, just like the first two. According to a Sept. 2017 report from The Times of Israel, Seasons 1 and 2 were adapted from the Israeli version of the show called HaHamama or "Greenhouse," and were filmed in and around Tel Aviv over a 10-week period.

According to an in-flight photo from the Instagram sneak peek highlight, the cast returned to Israel to film Season 3, and potentially Season 4. The highlight also spans 10 weeks, the same amount of time used to film Seasons 1 and 2. However, Season 3 is only eight episodes long as opposed to the usual 12.

As for what else we know about Season 4, per Digital Spy, both Danika Yarosh and Emma Gellar, who were recast as Brooke Osmond and Aviv Buchler for Season 3, respectively, are expected to return, and Becca, who received an expanded role in Season 3, will likely continue to be a present part of the story. Stay tuned for more details after the dust settles around the Season 3 drop.

More like this
Everything To Know About 'Indian Matchmaking' Season 3
By Brad Witter
Netflix Just Revealed When 'Never Have I Ever' Seasons 3 Will Premiere
By Gretchen Smail and Alyssa Lapid
Neil Patrick Harris’ 'Uncoupled' Character Will Make A Life-Changing Decision In A Potential Season 2
By Brad Witter
Does 'Locke & Key’s Ending Mean There Could Be A Season 4?
By Sophia Moore
Get Even More From Bustle — Sign Up For The Newsletter