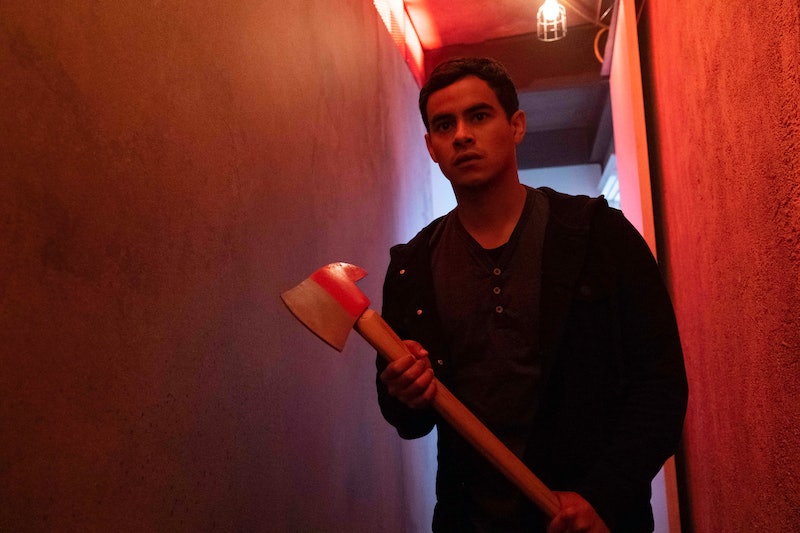 For the last year, Hulu has released one episode of Into The Dark per month. And after the first season comes to a close on Sept. 6, Into The Dark will return for Season 2 in just a month for an October episode, according to The Wrap. That's one of the shortest waits for a new season that a TV show can get, so the fans sure are lucky.

As reported by Screen Rant, Into The Dark is considered a "year-round event series" with a new episode dropping each month and pegged to a relevant holiday. The first season started in October 2018 with a Halloween-themed episode. Since then, it's released movie-length episodes for Thanksgiving, Christmas, New Year's, Valentine's Day, International Women's Day, April Fool's, Mother's Day, Father's Day, July 4, the first day of school, and Daughter's Day.

It's a unique idea, and one Hulu was probably smart to bring back for more. The first season scored high on Rotten Tomatoes, with a 73% critics rating and a 72% viewers rating. (Anything above 60% is considered "fresh" versus "rotten.") Two of the show's episodes even scored above a 90%, with the New Year's-themed episode getting a 93% rating and the Independence Day-themed episode garnering a perfect 100% rating.

As Vulture reported, Hulu was just as pleased with the series as critics and viewers. The network's vice-president of content development, Jordan Helman, said the series has an "engaged and passionate audience." That's likely thanks to the show's production company Blumhouse TV's "deep roots in the horror genre and their commitment to showcasing up-and-coming artists," said Helman.

According to Vulture, each Season 2 episode will follow the three-week production pattern that Season 1 did. The new episodes will carry the show into September 2020. Vulture also reported that the new season will continue to focus on "topical stories" pegged to relevant holidays each month, but don't expect the exact same ones to get covered this time around.

"The idea is diversity of entertainment within the collection rather than sameness," Blumhouse TV co-president Marci Wiseman told Vulture. "We lean into the fact that it's a fun experience to come every month and you don't quite know what's coming, rather than seeing something expected."

With that in mind, it's unlikely that Season 2's October episode will explore Halloween again. Instead, it will probably focus on another October holiday. Day of the Dead also begins on Oct. 31 and can easily lend itself the horror genre if the show wants to go down that path. Other notable October holidays include World Vegetarian Day (a zombie-esque episode pegged to that holiday would be a riot), International Day of Non-Violence, Mean Girls Day (on Oct. 3, of course), National Be Nice Day, Columbus Day, National Text Your Ex Day, and Drake's birthday. Would you not love to see an Into The Dark take on Drake's birthday?

There are just a few weeks to go until the actual theme is unveiled, and, knowing this show, the end result will surprise (and probably terrify) us all.