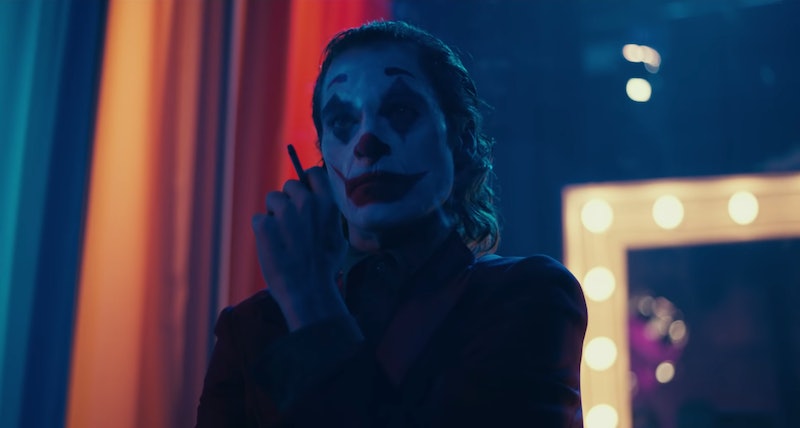 A departure from the quasi-futuristic timeframes used in other DC Extended Universe films like 2016's Batman v Superman and 2017's Justice League, Joker (out Oct. 4), appears to take place in a completely different era: a gritty, dingy Gotham City, circa the late 70's or early 80's. The period is evident in the trailers, where appropriate clothing styles, old cars, dirty subways, and outdated technology abound. The Joker timeframe and its unique visual identity seem to be central to director Todd Phillips' vision for the villain's origin story, which also happens to pay homage to some of the more iconic films of that era.

Joker reimagines the origin story of one of Batman's greatest arch-nemeses, the Joker. Here, he's Arthur Fleck (Joaquin Phoenix), a washed-up clown who, after a series of tragic events, turns to a life of crime to exact revenge on the people and the city who wronged him. The trailers convey a strong sense of place and time, as old tube televisions are everywhere, with one particular example still displaying a black and white picture. Arthur wanders through Gotham City at odd hours, with car models from the '70s and '80s lining the streets.

In a chat with Backstage, Joker production designer Mark Friedberg further dialed into that visual language. "One of Todd [Phillips]' ideas was that this version of Gotham was the pre-’80s boom New York, or urban northeastern center, but not the iconic New York," Friedberg said. "He was largely influenced by some of the cinema in New York, specifically [Martin] Scorsese’s Taxi Driver and King of Comedy—with Taxi Driver, the awfulness, the breakdown of the social contract. The awfulness of life for somebody challenged. Whether they’re emotionally, economically, [or] psychically challenged, it manifests in the place."

According to Slash Film, at a Los Angeles post-screening Q&A for Joker, Phillips dove further into these classic film inspirations. He said, "Obviously there’s a nod to a few things in this movie. King of Comedy for me, you’re way younger. I saw it probably when I was your age. And changed my life as well. I just love it so much And obviously I went to [Robert] De Niro, sent him the script. He understood the kind of reference, understood the sort of flip of Rupert Pupkin to Jerry Langford ... But certainly there’s a touch of King of Comedy in there." Robert De Niro, who starred in 1976's Taxi Driver and 1983's King of Comedy, also appears in Joker, playing Murray Franklin, a late night comedy television show host who spurs Arthur further towards villainy after he pokes fun at him during an episode of his show.

Speaking more to the timeframe, Phillips stated that the filmmakers didn't have an exact year in mind. However, the general era was chosen for several reasons. "One reason was to separate it quite frankly from the D.C. Universe for when I pitched it to Warner Brothers and handed the script in, to sort of make it clear this isn’t f*cking with anything you have going on," Phillips said. "This is like a separate universe. So much so it takes place in the past before everything else."

The existing DC Extended Universe has its own Joker: Jared Leto, who plays the villain in 2016's Suicide Squad. To try to establish Phoenix as the Joker at the same time would make for an awkward story conflict, so keeping them confined to completely different timeframes is strategic. In fact, reinforcing that separation seems to have been critical to getting Joker off the ground at all,.