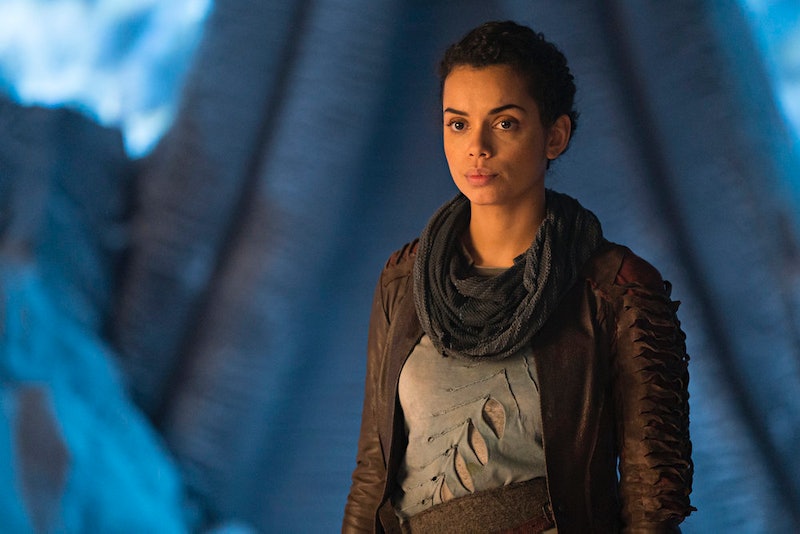 Blessings be to Rao! Krypton, the secret history of Superman's heroic space lineage, will not be gone for too long. When does Krypton return for Season 2? Ahead of the May 23 finale, Syfy has already renewed Krypton for another season, according to The Hollywood Reporter, so get ready for more of this unfolding saga.

Expected to premiere in 2019, the second season will likely pick up in the aftermath of this battle to take down Brainiac and save Krypton long enough for Superman, also known as Kal-El to be born. Presumably, the glory of House El will be restored along the way — and knowing this show, there are probably some big reveals and cliffhangers to come in the Season 1 finale as well.

The writers, thankfully, are prepared for the series to go on as long as possible, according to an interview Krypton showrunner Cameron Walsh gave to Collider. Walsh said:

"We talk about what that final moment for the series could be, in a perfect world, but it’s loose. By the nature of this show and the set-up and the timeline shifting, and because anything is possible, it means that we don’t necessarily feel wed to any specific endpoint. Because it is a serialized show and we have ten episodes, in this first season, to tell the story — it’s told in a way where there’s a lot of set-up and pay-off within episodes. There might be an arc for a few episodes, and there might be things that are set up in the pilot, that don’t pay off until the final episode. The approach to the storytelling is to work backwards, in a way. We think about where we want to end up, and then we start laying the pipe to get there."

Will Season 2 inch the show closer to the DC comics universe that fans know and love? Krypton has confirmed the existence of the Justice League and the Green Lantern in addition to, obviously, the Man of Steel himself. It's always possible that Alura In-Ze, Kara Zor-El's mother (and a featured character on Supergirl) could show up in some form at some time, since lineage and lineage twists are so important — and because in the comics, Alura was a hero in her own right.

Also, hopefully Adam Strange won't actually make it back to Earth. He's kind of the best thing about this series, kickass ladies like Nyssa and Lyta non-withstanding.

"Right now we're at the very beginning of Adam Strange's journey," said actor Shaun Sipos in an interview with Collider in April of 2018 when asked if Strange would ever suit up like his comic book counterpart. "He's wanting to be a superhero and he's needing to save Superman. So he hasn't got the red suit yet. He hasn't got the headpiece with the fin. So we're getting to see him before that, it's like getting to see Indiana Jones before he's really donned his hat."

It's also possible that fans will see more of Earth in Season 2. "We'll see where Adam's from," continued Sipos in the same Collider interview. "I think that Adam opens the door to a lot of comics and DC characters, for sure." That includes Hawkman, Hawkwoman, and lots of weird possibilities that a show like this could have a ball bringing to life on screen.

Syfy may opt for a Spring premiere again, especially if fans are already waiting until 2019. The network could also push the premiere up to January or hold it until summer, but the spring bow seems like the most likely bet. And that would give fans just enough time to do some re-watching, theorizing, and processing of all the exciting lore this series has to offer.