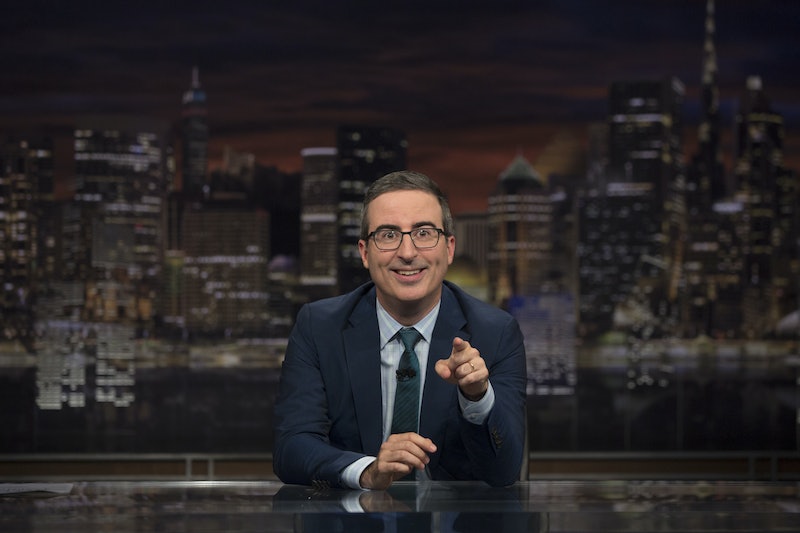 Whether you stay up until midnight on Sunday evenings to catch new episodes, or you watch selected excerpts on the show's YouTube Channel the next day, Last Week Tonight With John Oliver has been serving healthy portions of informational comedy regularly since its premiere in 2014. Season 5 of the show ends with the Nov. 18 episode, but fans won't have to wait long to get more episodes of Last Week Tonight. Last Week Tonight Season 6 will most likely premiere in February of 2019, if the show sticks to the airing pattern of previous years.

Variety reports that in late 2017, HBO chose to renew Last Week Tonight through the end of 2020, meaning the show will be one-third of the way through their order once they complete the 2018 season. The Hollywood Reporter also reports that each of the seasons in the order will amount to 30 episodes each year, meaning that until 2020 there will be more weeks in a year with new episodes of Last Week Tonight than there are weeks without. For the past 4 seasons, LWT has gotten an early start on the year's coverage by premiering new seasons of the show in February, and there is no reason to suspect that that trend won't continue with Season 6. Two months may not seem like a long time for a show to go off of the air, but with some major possible news stories still in development, there will be plenty of topics for Oliver to tackle when he returns in 2019.

The Mueller Investigation, or "Stupid Watergate"

The Robert Mueller investigation into possible collusion with President Trump's administration and Russia has been an ongoing topic on Last Week Tonight, jokingly referred to as "Stupid Watergate," and it's looking like a lot could happen in the show's two months off the air. MSNBC reported just a few days before the 2018 season finale that the investigation could be "coming to a head" soon. While LWT may not be able to comment week-to-week if there are any major developments, Oliver will surely have a lot to say when the show returns.

Last Week Tonight has been commenting on the goings-on on the Supreme Court since its inception, but 2018 saw the series taking in-depth looks at the Supreme Court's present and past experiences with justices that have been accused of sexual harassment. Even before Oliver dedicated an entire episode to examining Kavanaugh and talking about the Supreme Court justice in multiple other episodes, he sat down with Anita Hill for an interview to talk about her experience testifying for the Senate Judiciary Committee with accusations against Clarence Thomas. These stories may have both died down, but Last Week Tonight likely won't stop talking about the highest court in the land as long as it has an impact on American citizens.

While most other comedy-news programs tend to keep their focus on American politics, Last Week Tonight has made a habit out of educating people about important worldwide elections, including recent elections in Mexico, Brazil, and Italy. However, now that the 2018 midterms are over, the 2020 race for president is approaching and LWT will likely turn its focus back on America when it comes to election coverage. Oliver hasn't pulled punches in the past when covering elections, and it's hard to imagine he wouldn't do the same with the field of democratic candidates in 2020.

Last Week Tonight's format of packaging complicated news stories into accessible and enjoyable morsels of infotainment isn't just entertaining — in a way, it's also a public service. It's remarkable that anyone with a YouTube account has access to a year's worth of well-produced, in-depth video essays about politics, business, the legal system, and any of the many topics that Last Week Tonight tackles. Last Week Tonight may be taking a break for a few months, but the show will absolutely have something to say when it returns.