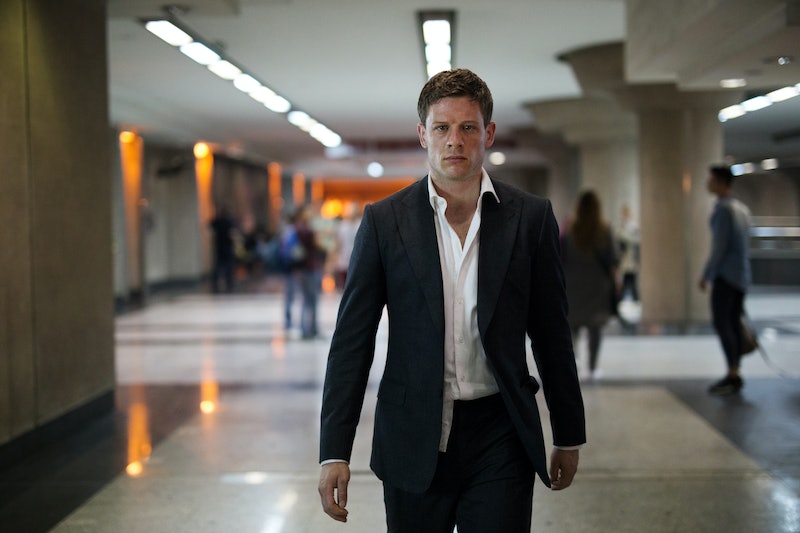 The BBC crime-drama series McMafia tells the story of a British-raised son of a Russian mafia boss, who is trying to escape from the world of organised crime in London. The series is co-produced by both the BBC and U.S. network AMC — both of whom have confirmed that a second series of the show will indeed be taking place. So when does McMafia season two start?

According to the Express, the BBC and AMC have confirmed that McMafia will return, however an official release date is yet to be announced. Bustle have reached out to the BBC for comment, and we will update with any new information once it becomes available. So far, the only indication of when viewers can expect to enjoy a second series comes in a recent report from the Radio Times, which suggested that a UK release date for season two will be confirmed after it has aired in — which is approximately around February 2019 — so it could be surprisingly soon.

The first series turned out to be a massive success for BBC One, after drawing in over seven-million viewers throughout the first run. When speaking about the viewers reaction to McMafia's debut season, show creators Hossein Amini and James Watkins said in a statement reported by Variety: "We are so thrilled with how McMafia has resonated with audiences across the world and are delighted to be given the opportunity to cast more light on the shady intersections of transnational criminals and their enablers in finance, law, intelligence agencies and even in governments."

Cast members expected to appear in the second series include the BAFTA nominated James Norton, who will reprise his leading role of character Alex Goodman. Previously Norton has been known for his work in War and Peace and the popular Netflix series, Black Mirror. Actor David Denick will portray the character of Boris Goodman, whilst Game of Thrones actress, Faye Marsay, is also expected to return to the series. According to the Express, other characters thought to be involved in the second season of McMafia include Rebecca Harper, Dimitri Godman, and Oksana Godman — each of whom are played by Juliet Rylance, Aleksey Serebryakov and Maria Shukshin, respectively.

Speaking on the TV format, Norton previously explained to Entertainment Weekly that he enjoyed the space it afforded:

"From the point of a view of an actor and a storyteller, it is wonderful to have six hours to really settle into that headspace and flex the muscles…[Co-creator] James [Watkins] was always saying we’re going to make an 8-hour movie."

The co-produced BBC and AMC series is actually based on a popular 2008 novel of the same name, penned by author Misha Glenny. When previously discussing the impending second series, the show's director and co-creator, James Watkins, told the Express, "I just wanted this series to go down well with people and then we’ll see where we head." Whenever the new season does eventually air, I'm sure it'll be just as thrilling as the first outing. Bring it on.