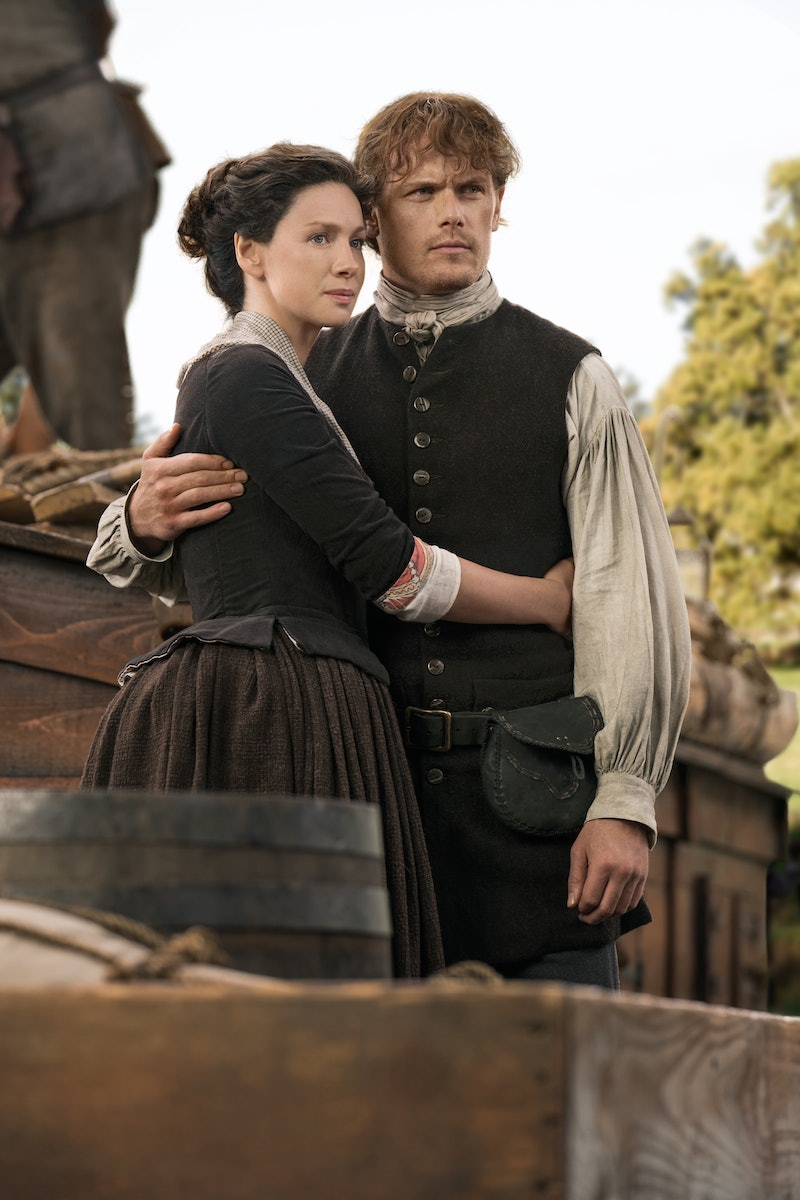 Outlander is, inarguably, a very beloved show. The people at Starz know this, which is why they went ahead and renewed the hit drama for two additional seasons last May, long before the fourth season ever made its way to screens. But now that Season 4 is coming to a close, it's time to start counting down the days until the Outlander Season 5 premiere, and fans will need to ready themselves for a fairly substantial spell of Droughtlander after Sunday night's finale.

So far, no official premiere date for Season 5 has been announced, and unfortunately, predicting returns for this particular series is nearly impossible. Many times, shows will air around a similar time each year, granting dedicated viewers a pretty reliable schedule to depend on — and some peace of mind while waiting for it to come back. However, that's not the case with Outlander.

Out of the four seasons that have premiered, none of them have ever aired in the same month as each other. Season 1 came out on Aug. 9, 2014, while Season 2 debuted on April 9, 2016. Then Season 3 kicked off on Sept. 10, 2017 and Season 4 really changed things up by airing on Nov. 4, 2018. So figuring out when Season 5 will hit our television screens is really anyone's guess at this point, though we do know each upcoming season will be 12 episodes.

The good news is that the show does a pretty decent job at working to get new seasons out to fans at least once a year, so in all likelihood, Outlander could return by late 2019 or early 2020. Sure, that seems like a long way away, but the cast, crew, and writers usually make all the waiting well worth it in the end. Plus, when in doubt, you can always rewatch previous seasons to capture some of that Highlander magic that made you fall in love with the show in the first place.

In the meantime, though, the Season 4 finale is sure to deliver some shocking twists. Will Jamie and Claire be able to save Roger from the Mohawk tribe? Is Stephen Bonnet still alive after the prison explosion, and if he is, what will he do now that he knows Brianna is pregnant? Only time will tell how this will all play out, but it should be enough to quench our Droughtlander thirst for a little while at least.

Regardless of wha happens, you can take comfort in knowing that Outlander is guaranteed to return for both Season 5 and 6. "Fans can rest assured their beloved Claire and Jamie will be back facing new challenges, adversaries, and adventures in Seasons 5 and 6 as we delve into American history and continue the story of the Frasers as they settle in the New World," Starz CEO Chris Albrecht said in a statement, per The Hollywood Reporter.

So don't worry, folks — Claire and Jamie's love story is far from over.