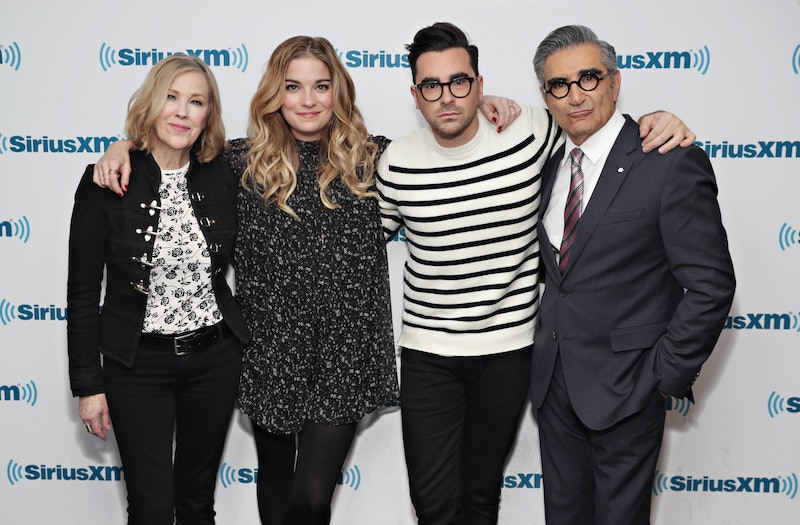 Schitt's Creek has been a fun show on Pop TV, with a little something for everyone. The comedy was created by real-life father son duo Eugene Levy and Daniel Levy, and it follows the Rose family's riches to rags story in Schitt's Creek. The show as much heart as it does laughs. But don't worry, it's not wholesome. And, as the show's third season finale airs Wednesday, April 5, on Pop TV, fans may be curious: will Schitt's Creek get a Season 4?

According to Deadline, Pop has already renewed Schitt's Creek for a fourth season, although a premiere date is undetermined at this time. But, all three seasons debuted in January, so it's likely that Season 4 will have a January 2018 premiere date. Pop acquired the show from Canadian network CBC, which still hosts the show in Canada. CBC announced the show's Season 4 renewal on the same day, according to the Deadline piece. Schitt's Creek is the Pop TV's first scripted show, and Deadline reported that the series is Pop’s most-watched original series, with more than half a million nightly viewers. The first two seasons of the show are also available on Netflix, and Season 1 is available with Amazon Prime.

While there are three seasons of the series to enjoy, fans will be struggling with a Schitt's Creek-shaped hole in their hearts after the Season 3 finale airs on Wednesday, April 5. So, what can fans watch while they wait for new episodes? Here are seven shows you need to check out.