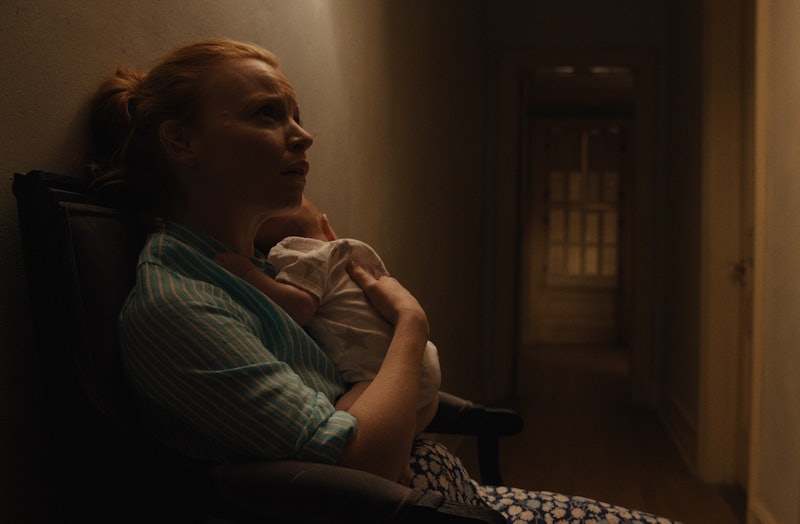 M. Night Shyamalan's Apple TV+ series, Servant, will be back for Season 2, according to Variety. In fact, the horror show was renewed last Nov. 22 — before Season 1 had even premiered. Season 1 has involved Dorothy and Sean Turner's creepy baby doll, who mysteriously comes to life, and their creepy nanny, Leanne Grayson (Nell Tiger Free), who is also tormenting them. The story wraps up in Season 1, so it's unclear what a Season 2 will bring to the series. However, there might be some issues behind the scenes.

While it's unclear when it will premiere, they begin filming Season 2 on Jan. 24, according to the Philadelphia Inquirer. Servant will be filmed in the Rittenhouse Square neighborhood of Philly, which a flier from the production company said was "iconic to Philadelphia." Filming for Season 1 began in late 2018, per the Inquirer, so if Shyamalan sticks to the same production schedule, audiences can reasonably expect Servant Season 2 to premiere in late 2020.

However, production may have hit a snag. On Jan. 15, filmmaker Francesca Gregorini filed a lawsuit against Shyamalan; his Servant co-creator, Tony Basgallop; Shyamalan's production company; and Apple, among others, claiming that the director stole the plot of Servant from her. "Servant is a wholesale copy of Plaintiff Francesca Gregorini's 2013 feature film The Truth About Emanuel," her lawsuit reads, in part.

However, it remains to be seen whether the filmmaker's allegations will slow down (or even halt) production on Servant Season 2. As of this publication, Shyamalan and Basgallop called the similarities "a coincidence," per the Atlantic, and Apple had declined to comment. Bustle's requests for comment were also not immediately returned.

In 2013, The Truth About Emanuel, premiered at Sundance. Not only does it have an eerily similar plot to Servant, but Gregorini claims that the Apple TV+ series also had a similar look and even shots. "I felt like my film had been studied in semiotics class and they had been given the task of 'Remake this,'" Gregorini said in an interview with the Atlantic.

Her 2013 indie film depicts the titular Emanuel (Kaya Scodelario), a teenage girl with a mysterious past, who becomes Linda's (Jessica Biel) nanny. Although the trailer doesn't give away the twist, it's revealed early in the film that Linda's baby is also a reborn doll, just like Jericho is in Servant.

Per the Atlantic, Gregorini's inspiration for The Truth About Emanuel came from her complicated relationship with her mother — actor Barbara Bach — and her own childlessness. "To take something that is so personal to me, and obviously so female-centric—to take it, co-opt it, profiteer off of it, and then on top of that … [insert] conversations about the nanny being 'f*ckable' and the mother being crazy … it's angering, honestly," Gregorini told the publication.

No matter how the lawsuit pans out, fans can rest assured that Servant will likely still return in some capacity. Just maybe with a new premise.