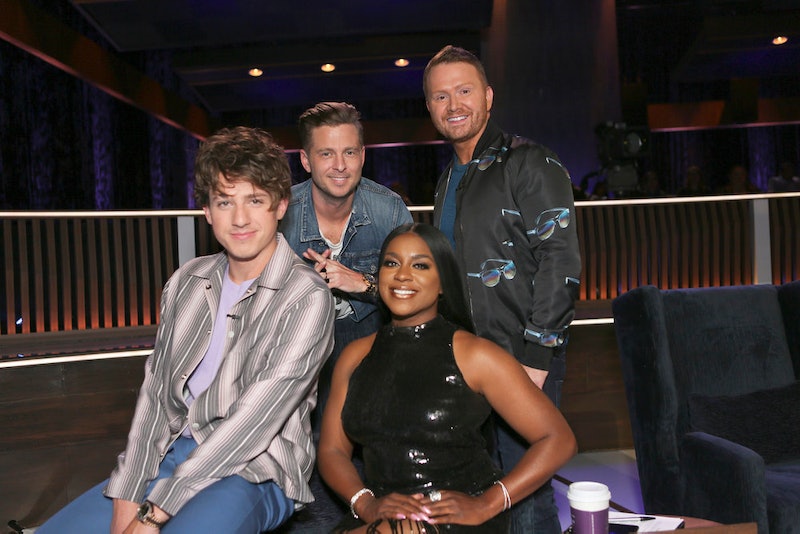 Good news for fans of NBC's new music competition series: Songland Season 2 is officially happening. The Hollywood Reporter confirmed the news on Tuesday, but a premiere date has not yet been set. For those who have been keeping up with the show, though, the renewal shouldn't come as much of a surprise.

Songland puts a fresh spin on reality TV talent shows by focusing not just on performances, but on the actual craft of songwriting. After 10 weeks spent matchmaking some of music's most recognizable voices with aspiring songwriters, the series has given rise to a number of successful hits including "Greenlight" by the Jonas Brothers, "Better Luck Next Time" by Kelea Ballerini, "Be Nice" by Black Eyed Peas, "Shadow" by Macklemore featuring IRO, "Solo Quiero (Somebody to Love)" by Leona Lewis, Cali y El Dandee, and Juan Magan, and "We Need Love" by John Legend — all of which reached No. 1 on iTunes music charts, according to THR.

It's not yet known which artists will be featured in Season 2, but the show will likely follow the same format. In each episode, songwriters perform their original tracks for a panel of professional songwriters and one special musical guest. The episode's winner gets to work with that guest to further develop the song and eventually release it as a single. While none of the tracks from Season 1 have become bona fide hits in the vein of, say, Lizzo's "Truth Hurts," a few of them have been able to find a significant audience via streaming services. And hey, the contestants get exposure and get to work with some of the biggest names in the industry. That's not a bad thing to have on your resume.

Overall, Songland is an interesting look at how the sausage gets made in the music biz. While you wait for Season 2, revisit some of the best tracks to come out of the show so far.

Macklemore's new track "Shadow" was written by and features Songland competitor Iro. A lot of the time songwriters just hand their tracks over to the artist and that's that, so the fact that Iro got to sing on "Shadow" is huge — especially for someone just starting out in the industry.

Having hit No. 1 with "Sucker" earlier this year, the Jonas Brothers were a hot ticket when they appeared on Songland. Their track from the show — "Greenlight," written by Able Heart — may not have made it onto the group's comeback album Happiness Begins, but it has amassed over 7 million streams on Spotify and 1.6 million views on YouTube as of publication.

Songland's most success tune — at least when it comes to quantifiable streaming figures — came from country musician Kelsea Ballerini, who turned Darius Coleman's "Better Luck Next Time" into her first big single of 2019. The track is more pop-inspired than Ballerini's past work, but it's clearly gone over well with her fans: so far, the song has racked up over 22 million streams on Spotify.

Hopefully, there's more where that came from in Songland Season 2.