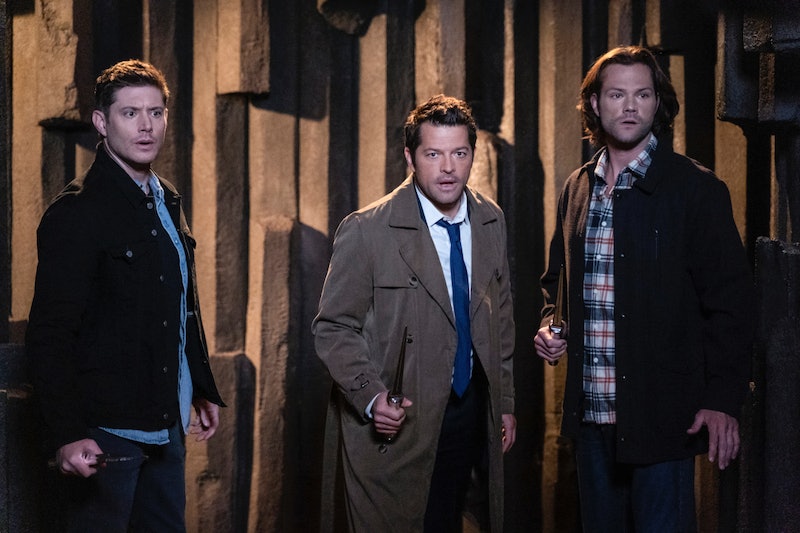 The holiday season serves as a rather confusing time for avid TV watchers. That's because — despite all the merriment — fans get deprived of their usual weekly dose of television goodness. However, when it comes to the return of Supernatural Season 15, viewers may want to consider not getting too eager for that day to come, given the much bigger goodbye that's still to come in the new year.

Back in March, series stars Jared Padalecki, Jensen Ackles, and Misha Collins announced in an Instagram video that Season 15 of Supernatural would be its last. “We just told the crew that even though we’re very excited to be moving into our 15th season, it will be our last,” Ackles said in the footage. “Fifteen years of a show that has certainly changed my life, I know it’s changed these two guys’ lives, and we just wanted you to hear from us that though we’re excited about next year, it will be the finale.”

After the fall finale airs on Thursday, Dec. 12, the show will only have 12 episodes remaining for the rest of the season, making its return from the winter hiatus all the more bittersweet. That being said, it is fairly easy to predict when the series will come back, given that its followed the same scheduling pattern for many years.

Though no official return date has been announced, if prior seasons are any indication, Supernatural will come back sometime in January 2020. So you'll only be without your typical Sam and Dean quota for a little over a month. But be warned — once they're back in your life, the clock will officially start ticking for the show's demise.

But while fans may not be ready to say goodbye to the series, the actors would prefer to go out on a high note. During the 2019 Television Critics Association press tour, CW president Mark Pedowitz discussed the decision with the audience, as per Entertainment Weekly, revealing that after a “very, very long, sad, heartbreaking discussion” with Padalecki and Ackles, the stars ultimately wanted to end it while the show was "still relevant."

Pedowitz noted that the actors were also interested in spending time with family and seeing “what else was out in the world” outside of the series. Though, if they ever had a change of heart and wanted to return, the door would always be open. “If you can convince them to come back, I’m open," Pedowitz joked. In the meantime, just be sure to soak up as much Supernatural goodness as possible — while you still can.