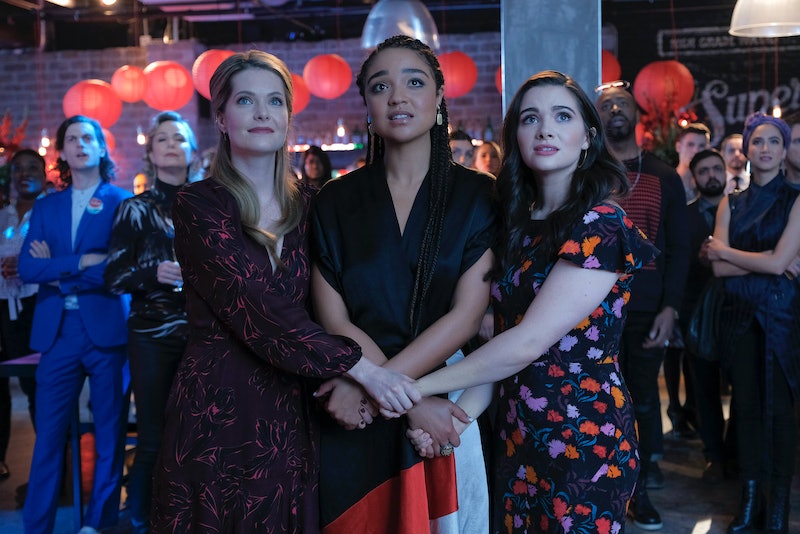 Another 10 episodes of The Bold Type have come and gone, which means we'll all be forced to find another way to spend our Tuesday evenings this summer. But thankfully, fans can take solace in the fact that the series has already been renewed, and there will be a lot to look forward to when The Bold Type Season 4 premieres. As for when that will be, an official return date hasn't been announced, and unfortunately, the show's schedule is getting more and more difficult to predict — but it shouldn't be much longer than a year.

The Bold Type originally premiered on June 20, 2017. Season 2 began airing around the same time, on June 12, 2018. That would have established a pretty regular timeline, except that Season 3 came back a couple months earlier than anticipated, on April 9, 2019. So depending on how long filming and editing takes, The Bold Type could return as soon as spring 2020 — or it could end up being later, too. Basically, just keep your ears peeled for an official date announcement, because playing the guessing game is a little impossible.

It's worth mentioning that Season 4 will bring a big change for the series. During the Freeform portion of Disney's upfront presentation in New York City in May, it was revealed that the showrunner for the last two seasons, Amanda Lasher, is stepping down and will be succeeded by Wendy Straker Hauser, who previously worked as a supervising producer for The Bold Type and on The Handmaid's Tale as a Season 1 co-producer. So, it will be interesting what new perspective she brings to the helm.

Also of note? The Bold Type stars Katie Stevens, Aisha Dee, and Meghann Fahy all found out about the renewal mere hours before everyone else, while reading the Teleprompter during rehearsal for their upfront appearance. And their priceless reactions were all captured on camera.

"On The Bold Type, we play characters who are determined to succeed in the New York fashion media business. We balance careers, friendship and love on the daily. But this show is so important to us and our fans because regardless of who you are, we are all just trying to navigate the mess of our lives," they began, taking turns reciting lines. And then, Fahy's part came in.

Before she could get any further, Dee exclaimed "what?" followed by an "oh my God!" from Fahy and hugs all around. "We are coming back for Season 4 boo boos," Dee eventually explained.

Stevens later shared a video (above) of the moment on Instagram, writing, "BEST SURPRISE EVER!!! Season 4 bbs!!! thank you @freeform @theboldtypetv #TheBoldType I cant wait to tell more stories."

So no matter when Season 4 arrives, know the show's stars are just excited as you are for more episodes.