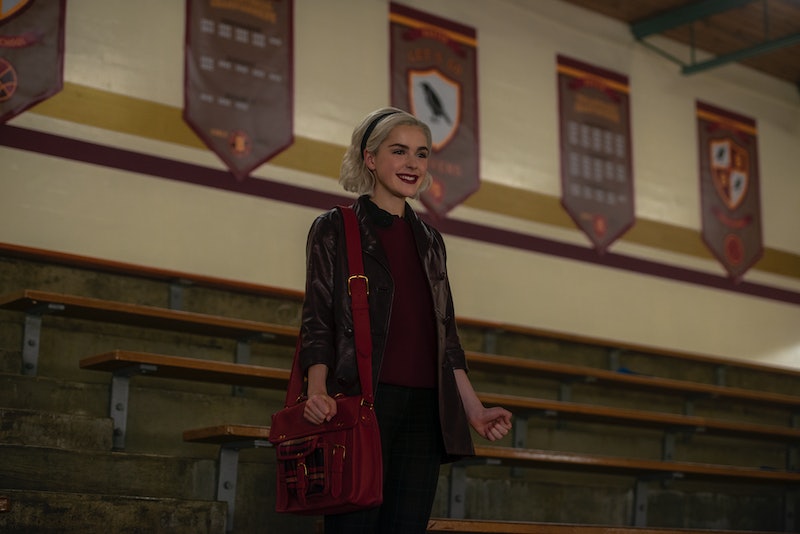 Fortunately for fans still eager for more of The Chilling Adventures of Sabrina after Part 2, the show has already been renewed for Parts 3 and 4. So rest assured, a lot more dark magic is coming your way. As of now, it's unclear when CAOS Parts 3 and 4 will premiere, but considering the series has been moving along at such a breakneck pace, it likely won't be long.

CAOS Part 1, released in October 2018, included 11 episodes. The show then put out a Christmas special, A Midwinter's Tale, in December, and is now returning with nine more episodes on April 5. That's a total of 21 episodes — all roughly an hour — in less than a year, which is... a lot of content. But apparently, we're just getting started.

Netflix announced via Twitter in December that CAOS had been green-lit for Parts 3 and 4. They didn't include any release dates, but based on the timeline so far, you can reasonably expect the show to return in fall 2019. Each "part" has been released about six months apart, and an April premiere for Part 2 puts Part 3 right in October, a year after Part 1 dropped.

As for what fans can expect from future CAOS installments, there may have actually been a clue hiding within Netflix's announcement. They revealed the Part 3 and 4 news by posting a close-captioned video of Salem, Sabrina's familiar/cat, and in an October 2018 interview with IndieWire, series creator Roberto Aguirre-Sacasa revealed that Salem might start talking in the future, as he did in the beloved '90s show Sabrina the Teenage Witch. Aguirre-Sacasa explained that initially, it made more sense to keep Salem mute, "partly to project the horror tone [of CAOS]," but that "isn't to say that Salem won't talk in the future."

According to IndieWire, Aguirre-Sacasa actually devoted an entire issue of the Chilling Adventures comics to Salem's backstory. Issue No. 6, "That Damned Cat," is all about Salem's life, dating back to the Salem Witch Trials. Aguirre-Sacasa said that he certainly hasn't ruled out the possibility of exploring that on the show. "We've definitely talked about doing a Salem-centric episode," he told IndieWire.

Aside from that, fans can probably, hopefully, expect a Riverdale crossover sometime soon, as it sounds like Aguirre-Sacasa has already given it a lot of thought. "I feel like where there's a will, there's a way," he told Collider ahead of Part 1. "I think it would probably be easier if maybe the Riverdale kids go to Greendale. On a dare, they could go spend the night in a haunted house. But I could also see the universe where Sabrina is like, 'I want to be mortal. I don't want to be a witch. I'm gonna transfer to this school, Riverdale High, where everything is surely gonna be normal and I'll be a normal kid.' But little does Sabrina know that Riverdale High is a lot darker and crazier than Baxter High. So, I think there is definitely a way to do it, and my hope is that one day we get a chance to do it."

The full plans for the Chilling Adventures of Sabrina Part 3 are still as secretive as the Dark Lord's agenda, but whatever Aguirre-Sacasa and his crew cook up, Sabrina is going to be enchanting fans for plenty of time to come.

More like this
Nicola Coughlan Shared A Lady Whistledown Excerpt From ‘Bridgerton’ Season 3
By Grace Wehniainen, Alyssa Lapid and Sam Ramsden
Watch The Thrilling Teaser Trailer Of 'Shadow And Bone' Season 2
By Gretchen Smail and Jack Irvin
Mike Flanagan Teases 'The Midnight Club' In This Exclusive, Creepy Clip
By Grace Wehniainen
The 'Andor' Timeline, Explained
By Gretchen Smail
Get Even More From Bustle — Sign Up For The Newsletter