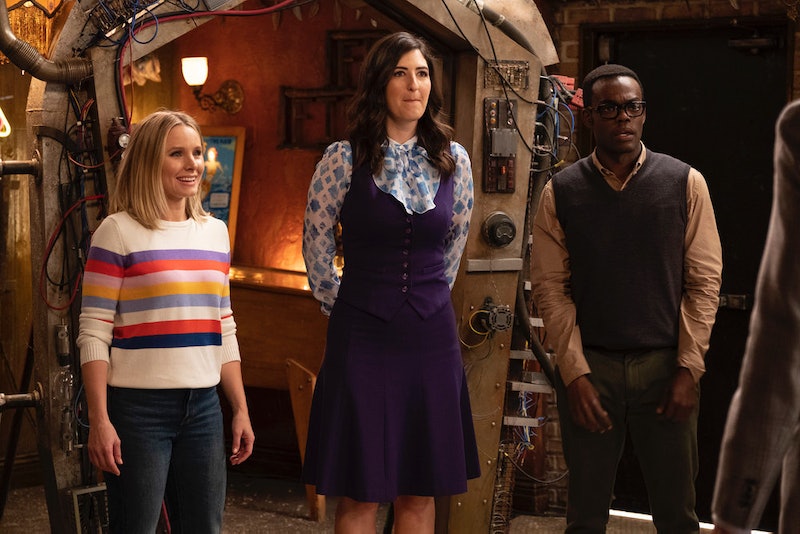 Eleanor, Chidi, Tahani, and Jason may be hellbent (pun intended) on changing their fate in the afterlife, but while there might still be hope for them, some things are simply inevitable. Like the fact that the holiday season means our favorite TV shows take a temporary hiatus, and The Good Place is no exception. So when does The Good Place Season 3 come back, exactly? Let's just say that 2019 can't seem to get here soon enough.

As of now, NBC has yet to unveil any official premiere dates for its midseason lineup, so it's hard to say with absolute certainty when the series will once again grace us with its presence. IMDb lists The Good Place's midseason finale as airing on Thursday, Dec. 6, which we know to be true, and then shows the season picking up with new episodes starting on Thursday, Jan. 10. Could this be the correct return date? Absolutely. But until an official NBC schedule is released, it's best to take everything with a grain of salt.

That being said, if Jan. 10 is, in fact, correct, that means viewers will only have to go without The Good Place for a little over a month, which isn't that bad and gives you plenty of time to rewatch the first two and a half seasons over the holidays, if you so choose. (And honestly, why wouldn't you? This show is pure comedy gold!)

It also doesn't hurt to look back on prior seasons to get an idea of when to expect the show to come back. Season 2 of The Good Place, for example, had its midseason finale on Nov. 2, 2017 and returned on Jan. 4, 2018. Similarly, Season 1's midseason finale debuted on Nov. 3, 2016 and came back on Jan. 5, 2017. That's a pretty firm pattern, but the timing is a little off for the third season. Usually, the series has already gone on its winter hiatus by now, so it would make sense for it to return a little later than usual, and Jan. 10 seems just about right.

Uncertainty aside, the network is usually pretty good at letting fans know when they can expect their favorite shows to return, so concrete answers should be coming your way soon. In the meantime, there's still plenty to look forward to in Thursday's midseason finale. The episode, which is titled "Janet(s)" has an intriguing description that reads as follows:

"Eleanor, Chidi, Tahani and Jason are now in Janet's world, an endless void, made necessary when Shawn's minion demons came a calling out of his makeshift portal. It's up to her to protect them while Michael tries to get information on just how the points system works for Good Place/Bad Place separation from the former's accountant who assigns said points."

Fans will have to tune in to see how it all plays out, but afterwards you can at least take comfort in knowing that the show's winter hiatus will be short-lived. We bull-shirt you not.