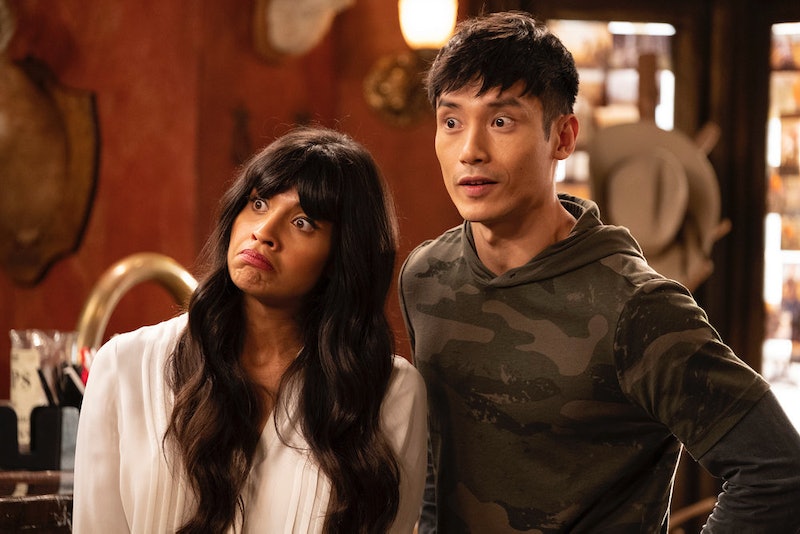 Streaming might be king in 2019, but that doesn't mean it's time to count network TV out just yet. NBC in particular is striving to hold its own against giants like Netflix and Hulu, and with the success of key shows like This Is Us and the Will & Grace revival, they're succeeding. Now, it's adding another round of its critically-acclaimed philosophical comedy The Good Place to its fall 2019 lineup. They haven't announced when The Good Place Season 4 will premiere just yet, but rest assured, it's on its way.

The Good Place was officially renewed for a fourth season in December, although the exact air date of the premiere has yet to be confirmed. However, since debuting in 2016, The Good Place has always premiered in the second half of September. It would make sense that the network would choose to do the same for Season 4.

Tracey Pakosta and Lisa Katz, co-presidents of scripted programming for NBC Entertainment, released a statement congratulating the cast and crew of the show on their upcoming new season, per The Hollywood Reporter. "Congratulations to [creator] Mike Schur and an exceptional cast and crew," they wrote, "all of whom collaborate to create a thoughtful, mind-bending, and hysterical series unlike anything else on television. We can't wait to see what unexpected stories the new season will bring."

And while, yes, there are a bunch of new humans moving into Michael's neighborhood, don't fret: the original cast doesn't seem to be going anywhere. In an interview with Collider from October 2016, actor Kristen Bell, who plays Eleanor Shellstrop, explains how she managed to work out a special contract agreement between The Good Place and her previous Showtime series House of Lies in order to make it work.

"There's definitely no way to say no to [creator] Mike Schur," she explained. "When he calls and says, 'I'd like to talk to you about a project,' on your answering machine, you just text him back, 'Yes!' Those are the rules, if you're smart."

Bell went on to add that Schur's idea for The Good Place was actually a concept she'd been contemplating for a long time, too, making it even more of the perfect fit. "[The Good Place is] also about something I obsess over, which is the ripple effect you have on the world around you, and how you can make your actions better and have a greater, more positive effect on everyone."

Jokes aside, if Jamil already signed a contract for seven years, and the show continues to impress the critics and rake in the viewers like it currently is, then it looks like Season 4 might only be the halfway point for The Good Place. Fork yes!